There have been burgers with lots (and lots and lots) of bacon on top of them in the past, but a burger made entirely out of bacon is a new one. Slater's 50/50, a hamburger restaurant with three locations in Southern California, is offering the 100% ground bacon 'Merica Burger as their July burger of the month. Because, you know, freedom.

And the bacon isn't just in the burger: it's topped with thick-cut bacon, "bacon island" dressing, and cheddar bacon. (There is also an egg on it.) Below, the full, bacon-y ad for the burger, which you have til the end of the month to order, as well as a press release.

(Orange County, Calif. – July 1, 2012) – Slater’s 50/50 celebrates Independence Day all month long with the star spangled ‘Merica Burger. As American as apple pie or football, the 100 percent ground bacon burger is a Slater’s 50/50 exclusive. In fact it’s the burger that started it all.

More than 1.7 billion pounds of bacon are consumed in U.S. restaurants each year and Slater's 50/50 is doing its best to round that out to and even 2 billion. More than just a ground bacon patty, the ‘Merica Burger takes bacon to the extreme with a sunny-side-up egg, thick cut bacon, bacon island dressing and bacon cheddar cheese for a burger unlike any other.

The Burger of the Month is available at all three Slater’s 50/50 locations – Huntington Beach, Anaheim Hills and San Diego –through July 31. 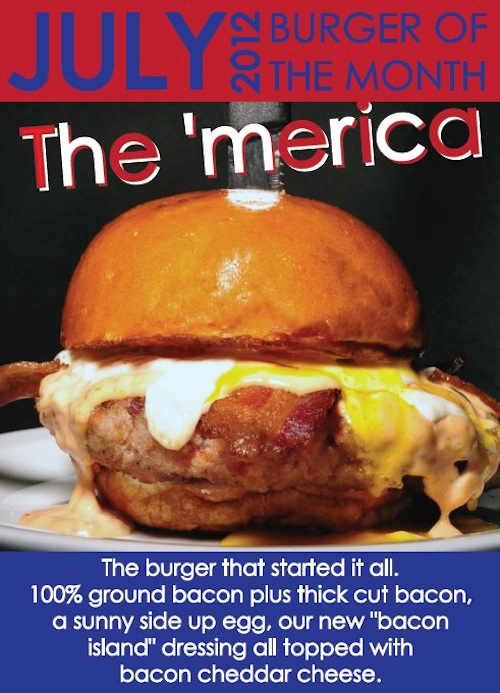