Hey it's a Chick-fil-A news dump:

· On Friday failed politician/successful television person Sarah Palin went to a Chick-fil-A in Texas and posted a photo on Facebook with the caption: "Stopped by Chick-fil-A in The Woodlands to support a great business." Politico reported that Palin said in a speech, "We don't have that in Alaska... Love me some Chick fil-A." [Facebook, Politico]

· And then beleaguered news network CNN played the song "Stupid Girls" by Pink before a segment about the Sarah Palin "news." A CNN spokesperson told the Hollywood Reporter: "The music selection was a poor choice and was not intended to be linked to any news story... We regret any perception that they were planned together." MRCTV has video, and here it is:

· Last week NYC Mayor Michael Bloomberg said that it's "just not government's job" to "have a test" for business owners' political beliefs. But City Council Speaker Christine Quinn wants Chick-fil-A out of New York City. She published a letter written to the president of New York University (NYU hosts NYC's sole Chick-fil-A location). It read, in part: "I urge you to sever your relationship with the Chick?fil?A establishment that exists on your campus... This establishment should be replaced with an establishment where the ownership does not denigrate a portion of our population." [Observer via Daily Intel]

· On Friday afternoon, Washington, DC mayor Mayor Vince Gray joined American mayors from Boston to San Francisco who have denounced Chick-fil-A yet probably cannot — and, in Gray's case, will not — legally do anything about keeping it out of their cities. Gray tweeted on Friday: "Given my longstanding strong support for LGBT rights & marriage equality, I would not support #hatechicken." [Eater DC] 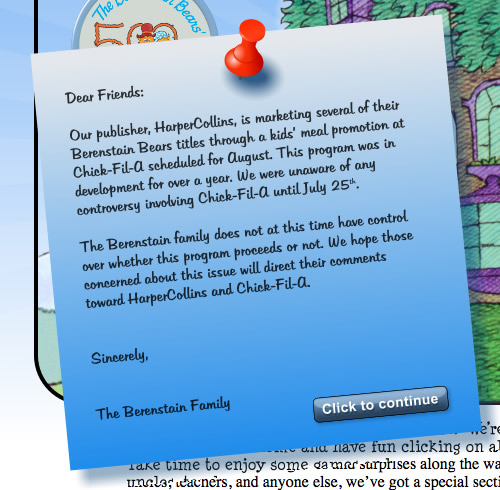 · Last week Jim Henson pulled its toys from Chick-fil-A, and the chicken chain found a new replacement: A Berenstain Bears book about the Golden Rule. The people behind the Berenstain Bears updated their website to read:

Our publisher, HarperCollins, is marketing several of their Berenstain Bears titles through a kids' meal promotion at Chick-Fil-A scheduled for August. This program was in development for over a year. We were unaware of any controversy involving Chick-Fil-A until July 25th.

The Berenstain family does not at this time have control over whether this program proceeds or not. We hope those concerned about this issue will direct their comments toward HarperCollins and Chick-Fil-A.

Apparently the Berenstain Family also has an agenda, having released a series of religious Berenstain Bears books. But also an agenda of trying to duck out of the way of this Chick-fil-A madness.