Share All sharing options for: Chick-fil-A Provided Franchises With a Cut-and-Paste Form Letter in Response to Backlash

Chick-fil-A president Dan Cathy may be "guilty as charged" when it comes to an anti-gay marriage agenda, but the fried chicken chain would like you to know each individual location has its own set of beliefs and values... that are all pretty much the same. The eagle-eyed newswatchers over at the Daily Kos noticed that statements released by at least three Chick-fil-As (in Chicago; Decatur, Georgia; and Hollywood, California) are basically form letters, with pertinent local data swapped out.

The problem is, the letters attest to each location's individualism: "[Cathy] has made it clear to me those were his personal views, and that his intent was not to speak on behalf of every Chick-fil-A owner." Perhaps not, but the form letters below certainly seem to represent the party line. This is all just part of the ongoing Chick-fil-A media shitshow since Cathy's remark; more updates from the weekend are available here.

Our Agenda is Providing Genuine Hospitality & Service to All: Chick-fil-A Downtown Decatur

Since opening in March of 2005, Chick-fil-A Downtown Decatur has been dedicated to serving our guests with honor, dignity and respect. We work our hearts out to make sure every guest receives amazing food and service regardless of belief, race, creed, sexual orientation or gender. Nothing about our agenda has changed.

My wife and I are the owner/Operators of this restaurant, and our commitment to the city goes back many years. My wife has been in the Decatur area since 1990 when she began college at Agnes Scott and then worked for the College for several years after graduating. When we learned of the Chick-fil-A opening in this city we jumped at the chance to open up our business here. We are not a corporation – we are real people and taxpayers as each Chick-fil-A franchise is independently owned and operated.

We are a family and a business dedicated to serving our community. We have consistently been generous donating food, money and coupons to the local Decatur community including DCM, CSD, the DBA, Bulldog Boosters, Decatur City Hall and Economic Development, and local churches. The list goes on and on? This weekend we are feeding the artists and volunteers during the Poverty is for Real benefit at Eddie’s Attic and next month we are donating food for a Volleyball Tournament at Decatur High School (DHS) and feeding the Decatur Book Festival volunteers.

We employ more than 70 people — many of which are DHS students. We have provided more than 20 college scholarships to team members in our restaurant alone with many of those awarded to DHS students. Our passion is building leaders for future generations, regardless of sexual orientation or beliefs.

We know that some of our guests are upset by comments made by Dan Cathy, president of Chick-fil-A Inc. He has made it clear to me those were his personal views, and that his intent was not to speak on behalf of every Chick-fil-A owner. We hope those who are upset will look at their relationship with our restaurant and allow us to continue to serve them. If you have questions or concerns, please come into the restaurant and speak with me personally.

Until then, we will continue to serve our guests in the only way we know how – with great food, exceptional service and a lot of fun.

A Statement From a Chick-fil-A in Chicago

Since our opening last year, Chick-fil-A Loyola Water Tower has been dedicated to serving all of our guests with honor, dignity and respect.

In response to the recent controversy regarding an additional location in Logan Square and comments by Mayor Rahm Emanuel, I would like to invite Mayor Emanuel into my restaurant to meet me, my husband Steve, and my management staff.

We are a family of deep Chicago roots—my husband and I both came from city worker families (teachers, police, laborers) and Steve is a city worker.

We are not a corporation—we are real people and taxpayers as each Chick-fil-A franchise is independently owned and operated. We are Chicagoans who are dedicated to serving our community. We hold fundraisers for hospitals, school, fallen police and we donate to a wide variety of causes, including everything from churches to gay and lesbian organizations.

We alone created 97 jobs this past year and our passion is building leaders for future generations, regardless of sexual orientation or beliefs.

In addition to my personal invitation to Mayor Emanuel, we would like to extend the invitation to any Chicagoan to visit and experience our Restaurant. We will continue to serve our guests in the only way we know how—with great food, exceptional service and a lot of fun.

A Statement From a Chick-fil-A in Hollywood 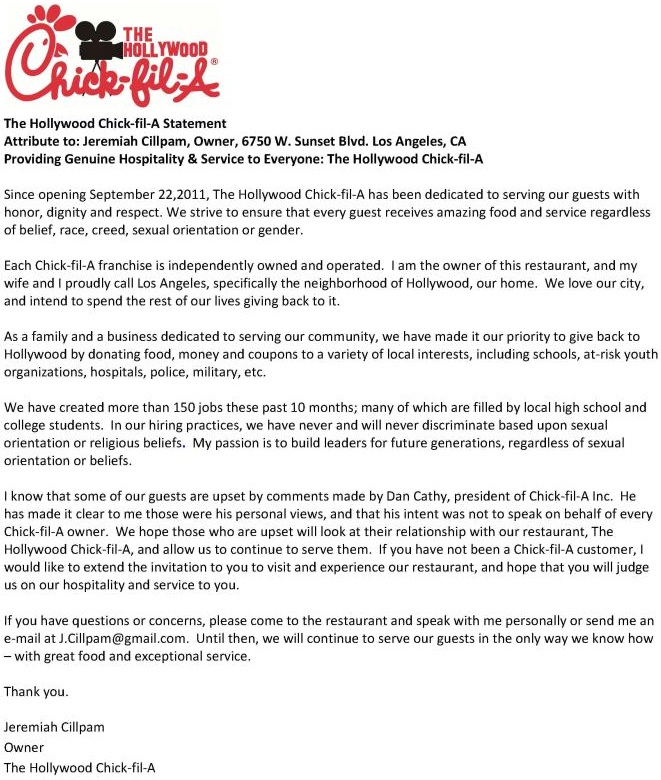