Welcome to Sound Cheque, where we sit down with one of our favorite bands to get the scoop on their city-by-city dining picks. See recent editions with James Murphy, Chromeo, and Beirut. 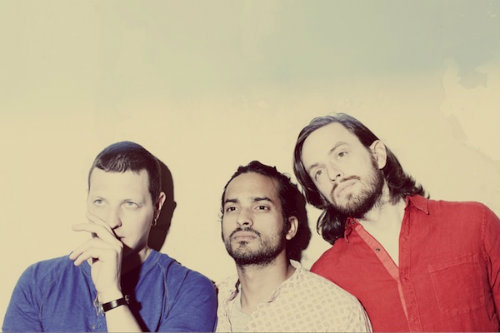 A first listen of Fragrant World, the acclaimed band Yeasayer's forthcoming album, suggests the Brooklyn trio's getting a little weirder, a little darker, a little more indecipherable this time around. But play the tracks — two of them are available below — over a few times, and the group's characteristic grooves and hooks begin to surface, confirming that you'll yet again be able to go see them and dance. As the band gears up for a world tour in support of the new album, frontman Chris Keating got on the phone to talk about how seriously he takes eating out. There's everything from feijoada in Brooklyn to Scandinavian breakfasts to organic sushi in Tokyo. Here goes:

What's the last good meal you had?
You know, the last good meal I had was the other night. It used to be a real hole-in-the-wall place off of Flatbush Avenue [in Brooklyn], and they just moved around the corner. It's called Taro Sushi. It's a great, omakase-style place, especially considering its price. They closed for a while, but then I realized they had moved. It's still as good as it used to be, just a tad more glossied up.

Is it traditional sushi?
I'm not really a big fan of the messed-with stuff. It's pretty straightforward. The fish is really fresh, and the presentation is great. For me, one of the great signifiers that it's a good place is that they have natto and ume shiso.

What are some of your staple places in New York?
In general, we end up at Beco a lot, the Brazilian place. It's really good and really small. My wife is Brazilian, so she is always looking for a quiet, authentic joint.

What do you get there?
They do a nice feijoada, but what I usually get is the moqueca, the fish stew. But everything I've ever had there — from the farofa to the way they cook the collard greens — is very much traditional. Five Leaves is a staple for me, since it's consistently good and happening. I like the Lobster Joint there on Manhattan Avenue.

What about when you venture outside of Brooklyn?
Sasabune on the Upper East Side is to me the best sushi place in New York.

You can have the omakes there in like 20 minutes.
It's the best. It's mellow, no-nonsense, and you just go in and see what they have.

Every now and then, we try out a fancier place. We just went to Brushstroke, which was cool but just a little bit much. It felt like there was a thousand people working there. I didn't need all that fuss, really. It's super expensive, but it was an anniversary thing for me and my wife.

Sensing that you really like Japanese food...
Yeah, I feel like I tend toward Japanese places when I want to splurge. But my friend just opened a coffee spot and breakfast taco shop called Whirlybird which is really pleasant.

What are some favorite restaurants outside of New York, whether in the U.S. or abroad?
I'm very fond of the way they eat breakfast in Scandinavian countries. Breakfast can be not very exciting, but in those countries, they have the widest variety of pickled herring and smoked fish and pickled egg and smoked cheeses. That's always great: to wake up with that shock. I've tried to bring that home, but people tend to look at me weird when I say I want herring and mustard sauce in the morning.

I was also just in Singapore, and it really is the food capital of the world, like many chefs say. Anthony Bourdain made the point that chicken rice seems so unexciting, but it actually is amazing. He's right.

Can you point out specific restaurants?
Mission Chinese in San Francisco is great.

Really.
I'm gonna go there tonight! I love the one in San Francisco. I'm a fan of spice in general — I like dousing stuff in hot sauce — and I love no-nonsense restaurants. Everything I ordered was flavorful, and it's run by these no-bullshit young guys.

There's also a place in Japan called Ouchi. It felt like walking into someone's home. Basically, what they do is really amazing food that doesn't use a lot of sugar or preservatives. It's a really fresh, organic approach to sushi. It's that cliché — which you can see in Jiro Dreams of Sushi — of a guy dedicating himself to a craft.

Do the other guys in the band care as much about eating well?
Yeah, just as much if not more. Ira, for instance, is really well-versed in New York restaurants and is always trying to go to the new places. The highlight of the day for us while we're on tour is finding a great place to eat.

Finally, do you give a shit about the music playing in restaurants?
I want it to be quiet. I don't want to hear music blasting.

Even if it's music you like?
Yeah, man. I don't go there to listen to music. Music can be good in a restaurant, but I don't go to a restaurant to hear their selection of music. I deal with loud sounds all the time.