Share All sharing options for: Eric Dayton on The Bachelor Farmer's First Year in Minneapolis, Minnesota 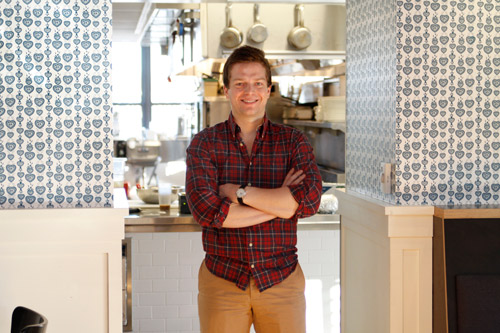 When Eric Dayton and Andrew Dayton opened their first restaurant The Bachelor Farmer in Minneapolis, there was instant buzz about the place — not only because its owners are the sons of Minnesota Governor Mark Dayton, but also thanks to the cocktail spot Marvel Bar and the men's clothing store that they also opened in the building. Over the past year, the first-time restaurateurs have stacked up four-star reviews plus a recent visit from President Barack Obama. Here now, Eric Dayton on being a rookie restaurant owner and The Bachelor Farmer's first year.

As a first-time restaurateur, how did you decide you wanted to jump into the restaurant business and how did you come up with the concept?
I actually had some background in restaurants. When I was in high school my dad's cousin owned what was at the time the premier fine dining restaurant in Minneapolis and my summer job in high school was working as a line cook. Or I should say I started as a prep cook and eventually worked up to a line cook. And really loved the work, loved being in the kitchen, loved the camaraderie and the teamwork. It provided me a lot of what I really enjoyed about sports, so I had a blast.

And then this opportunity to buy this old run-down warehouse in this great neighborhood of Minneapolis came up and it was a chance for [my brother and I] to invest in the city where we grew up and a city we really love and to be part of an up-and-coming neighborhood. And the opportunity brought together different interests that we shared in food, wine, retail. I went and helped manage a restaurant in San Francisco. I wanted some front of the house experience. But really I knew I was just getting enough experience to know what I needed to look for in other people who had much deeper experience to bring onto the project to help us make it successful.

In terms of the way it became a Nordic restaurant, the summer before I started business school, my now-wife and I took a trip to Scandinavia. We went to a number of the Nordic capitals. I had never been there before and I was really inspired and excited by the fashion, the people, the culture, the design, the architecture. I don't personally have Scandinavian background, but growing up in Minnesota you're always told what an important part of our heritage that is as Minnesotans. It seemed like there was an opportunity to celebrate contemporary Nordic culture in a way that I wasn't seeing done in the Twin Cities.

And you said you worked at a restaurant to get an idea of what you would need in hiring. How did hiring go?
Each of our key hires happened in a different way. Our head bartender Pip Hanson had been running the bar at a small neighborhood restaurant in south Minneapolis. He actually approached me. He had heard about the project, somehow he heard it was going to involve a basement cocktail bar and I think he was looking for an opportunity to do a bar of his own. He had a great reputation and I knew how talented he was. That one just kind of fell into our laps, so to speak. The general manager Nathan Rostance met through a friend of mine. We had a shared idea of what we thought really great service was and what kind of restaurant we wanted this to be. He also has a great understanding of the business and a great attention to detail when it comes to making sure we're a successful restaurant, which at the end of the day was to be a priority.

And then our chef Paul Berglund, we probably spent the most time looking for our chef. It was actually again through word of mouth this time, through chefs in town. One that was probably most helpful to us was Alex Roberts, who won the James Beard Award for the Midwest for his restaurant Alma. He was unbelievably helpful in advising us on this project. Paul was at that time working at a restaurant in St. Paul called Heartland. We sort of realized Paul was ready for an opportunity of his own. Alex knew we were looking for a chef and made the introduction to us. It was really incredible how supportive and helpful and generous the local restaurant community was in helping us get off to a successful start.

And so was it always going to be the three concepts under one roof? The restaurant, the bar and the retail front?
Yeah. That was an idea we were excited about. The building afforded us quite a bit of space and we weren't going to do a 17,000-square-foot restaurant, that's for sure. So we wanted to piece together a few different ideas and do it in a way that would hopefully make the building where you could come for a number of different reasons. Maybe you come for a drink and stay for dinner. Maybe you come for dinner and then browse the store afterward. We really wanted to make it sort of a hub for the neighborhood. We weren't quite sure exactly how they would fit together. That's something we worked out in the design process of renovating the building.

How did the buildout go?
It actually went really remarkably smoothly given the scope of the project and given, again, we weren't real estate developers. This was new territory for us. But our second cousin Jim Dayton by great coincidence is one of the leading architects in Minneapolis and we have a great relationship with him. So we hired him to be the architect and he brought a team. We had a great general contractor that brought a lot of experience doing historic building renovations. If there's sort of one theme to this project it's been bringing together really great, experienced, talented teams to help us with things we're new at and that we don't have a lot of experience with.

And from I understand you had a lot of buzz going into your opening. Can you tell me what that was like? Was there a lot of pressure there?
I think it was exciting to have people anticipating the opening of the restaurant. We certainly felt pressure, both my brother and me and our whole team, to make it a success. It sort of got to the point where we were getting close and we were thinking, "Okay, when are we going to schedule our soft opening?" It was tempting to keep pushing it back. And then finally we just had to say we're as ready as we're going to be. We're never going to feel 100 percent. We didn't do a big press push. We sort of opened our business and let it happen through word of mouth. I think it was good that we didn't try to have a big, flashy grand opening because I think it probably would have gotten swamped.

You have a bit of a natural publicity you're going to get anyway with your family background and your father. I'm curious how that played into everything for you guys. Was that something you tried to play down? Or up?
There was no real point in trying to play it down. Our dad is the governor. That was part of what drove the interest in the project very early on. I think at this point the restaurant is going to fail or succeed on its own merits. We might get someone who comes in the first time because of the connection with our dad or because they know our last name, but they're not going to keep coming back because of that. It probably contributed a little bit to the early buzz, but I think from there the restaurant has succeeded on its own merits, not through any connection to my dad or to my brother or me.

And how did your reviews go?
They've gone really well. It's almost like a no-hitter. I hate to talk about it because I don't want to jinx it, but we've been really fortunate. The start of the restaurant was successful and we were busy. And then we got a four-star review from Rick Nelson, the food critic at the Star Tribune. I can just almost to the minute point to where suddenly the phone just started ringing off the hook and it was a whole new level of interest and a whole new level of busy and we just kind of went into overdrive at that point. And we've been in that gear ever since.

I saw, too, that President Obama has stopped in there and given you the Obama Endorsement.
I don't know if we'd call it an official endorsement, but that was a real thrill. Never in our wildest dreams would we have planned to have the President in for a meal in our first year or even ever. So that was certainly a thrill and kind of a surreal experience.

And how did it come together?
My brother and I knew a couple of people on the campaign staff and we knew he was coming to Minneapolis, so we submitted the restaurant for their consideration and said it would be really exciting to have an event here. But we really thought it was a pretty long shot. We expected they would go to a big hotel with a big ballroom and have a much larger-scale event. It turned out actually that is usually what they do and the campaign was kind of tired of big hotel ballrooms and they were looking for something that was more intimate and more uniquely Minneapolis, uniquely Minnesota. We really didn't think we had much of a chance and it was a really exciting surprise when it worked out.

And what kinds of things have you learned over the past year. Is there anything you've changed to make things better?
We haven't made any big changes over the course of the year. But I would just point to the talent and experience and strength of our core team and the people that they helped us to hire. I think by having a really experienced general manager, a really talented, experienced chef, it helped us to avoid, probably I'm sure, countless rookie mistakes that my brother and I would have otherwise made had we not had people to help us know better.