America's 9 Most Elusive Dishes (And How to Get Them)

Share All sharing options for: America's 9 Most Elusive Dishes (And How to Get Them)

Artificial scarcity is not just for fast food chains any more. More and more restaurants are creating a buzz by only serving a limited small quantity of a specialty dish, from hamburgers (it's mostly hamburgers) to fried chicken to steaks to house-made Twinkies. While the restaurants below may have started experimenting with limited quantities for any number of reasons — small kitchens, inadequate supply, or a desire to focus on small batches — the result of doing so is often lines out the door.

Below, a round up of some of the most hard-to-get dishes across the country, and some tricks for how to get your hands on them. Note: the dishes on this list are included because they are available in limited quantity while the rest of the menu is more readily available. There are restaurants that sell out their entire menu daily — many barbecue restaurants come to mind, as do several cultishly followed doughnut shops — and those are not included.

Did we miss your favorite hard-to-get dish? Let us know in the comments. 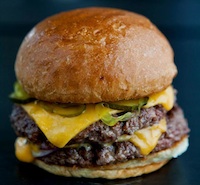 Location: Atlanta, Georgia
Number Available: 24 each night, more on Sundays.
The Situation: Each night at 10:00 an H&F staffer comes out with a bullhorn and announces that it's burger time, following which 24 double patty cheeseburgers are served to an eager crowd.
How to Get One: Show up early, before 9 PM. If it's not too busy, servers will let you reserve a burger, although all members in your party must be present. Otherwise, the burger is a regular menu item during their Sunday brunch — but be warned, Yelpers maintain that it is not nearly as good as the 10 PM burger. It's possible that has something to do with all the cocktails you drink while waiting for the late night burger, though. 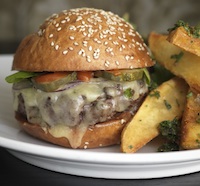 The Craigie on Main Burger

Location: Cambridge, Massachussetts
Number Available: Less than 20.
The Situation: The off-menu burger is ground in-house from three different cuts of meat and beef bone marrow; it is only served in the bar area of Craigie on Main. Servers tip off diners if they're available, and if they're not, tough luck.
How to Get One: Your best bet is to come early and sit at the bar, but a rep for Craigie on Main notes there's often a line out the door before the restaurant opens at 5:30PM. 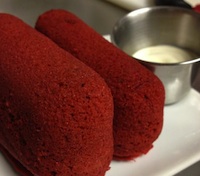 The Twinkies at Drink.Well

Location: Austin, Texas
Number Available: 24 per night.
The Situation: Austin area pub Drink.Well makes 24 twinkie-esque pastries each night, and flavors change weekly. Also? They let you buy more than one, if you want — you even get a dollar off if you buy two. Past flavors have included root beer float, creme brulee, mint chocolate chip, and red velvet.
How to Get One: Sometimes they sell out, sometimes they don't. You want to take chances when homemade twinkies are on the line, that's up to you, but better to get there early. 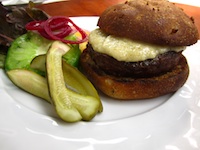 The Burger at the Tavern Room

Location: Gramercy Tavern, New York City
The Situation: The Tavern Room serves 20 burgers per day during lunch. They generally run out by 5:00PM.
How to Get One: The Tavern Room takes walk-ins only, but a rep for the restaurant does note that summer is a better time to snag a walk-in table. Ask a server to find out if there are any burgers still available.

Location: Houston, Texas
Number Available: 12 every Friday.
The Situation: Rainbow Lodge is a wild game restaurant, and every Friday they serve twelve hamburgers made from the trimmings of whatever they've served that week. Each Friday, they announce the mix on Twitter; one week it's buffalo, wild boar and pork belly topped with green pepper chili and cheddar cheese, the next it's elk, buffalo, ribeye trim, and pork belly topped with cornmeal fried avocado and gouda, and the week after that it's buffalo, venison lamb, and pork belly with crushed roasted garlic and pimento cheese on top.
How to Get One: Get there early; Rainbow Lodge opens for lunch Friday mornings at 11:30.

Location: Portland, Oregon
Number Available: Five burgers at Le Pigeon each night.
The Situation: Before you start losing it in the comments, yes: this burger is available whenever the hell you want it at Le Pigeon's sister restaurant, Little Bird Bistro. That said, before Little Bird opened the Le Pigeon burger was an incredibly limited commodity. Only five were served per night.
How to Get One: Get to Le Pigeon when they open, or, you know, go to Little Bird.

The Luther at ChurchKey

Location: Washington, DC
Number Available: 30 every Sunday.
The Situation: ChurchKey pastry chef Tiffany MacIsaac told the Washington City Paper they used to make as many Luthers as people wanted, until one day "We fried so many doughnuts one day, the fryer broke." Now the fried chicken/bacon sandwich on a brioche doughnut with maple-chicken jus and candied pecans is only available to 30 lucky diners every Sunday.
How to Get One: ChurchKey opens at noon on Sundays; get there early.

Location: Houston, Texas
Number Available: About 90.
The Situation: Hay Merchant and its sister restaurant Underbelly both do whole animal butchery in-house. Every Tuesday, they turn any leftover Grade A cuts of beef into steaks and start selling them at 5 PM. The restaurant describes them as "uncommon specialty cuts": in the past they've gotten sirloin, flatiron, terrace major, vein steak, and whole muscle cuts. And they're all Texas raised steaks.
How to Get One: Get there early.

Location: Seattle, Washington
The Situation: Ma'Ono makes cultishly followed fried chicken, and they fry 30 whole birds per night, nor more, no less. The only way they guarantee you'll get one is if you reserve it.
How to Get One: Reserve a chicken for your table while making a reservation.