Dave Beran on Next, the Creative Process & Future Menus

Share All sharing options for: Dave Beran on Next, the Creative Process & Future Menus 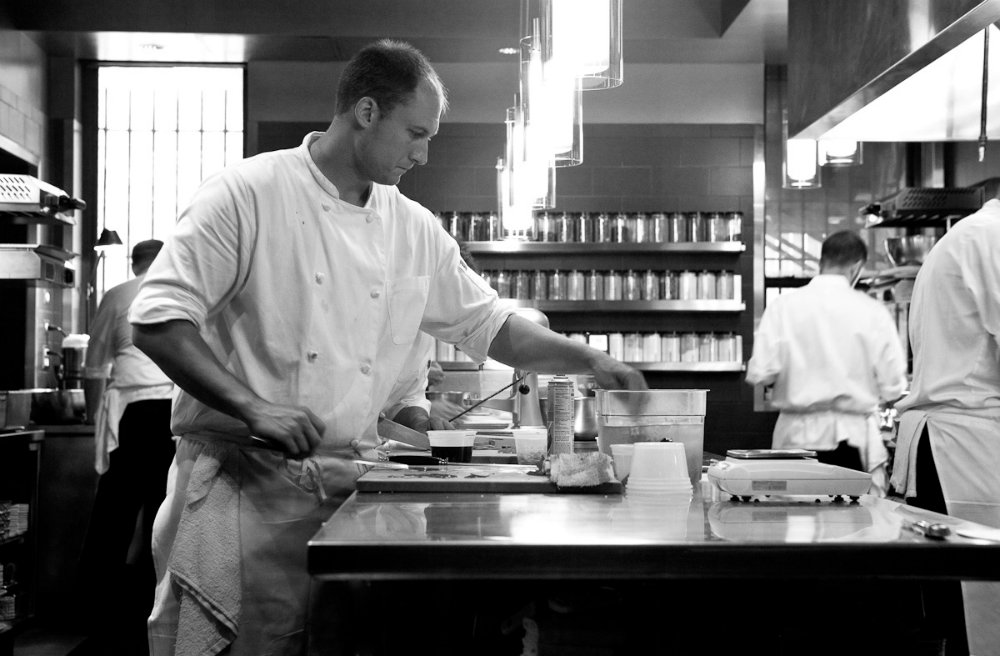 In the concluding portion of this interview with Next's Dave Beran (see part one here), the chef talks about developing the restaurant, things he would have done differently, the creative process, what he misses most about Alinea, and the menus he'd love to tackle in the future.

I've read and heard about the story of Chef Achatz cooking Nick Kokonas the classic duck dish, and how that was one of the catalysts for Next. At what point did you get into the picture?
Nick had sent me the business plan and ideas for Next years ago, when he had the whole idea for the ticket system. Initially, if I'm not wrong, Jeff Pikus was the guy who was going to run Next. He ended up leaving Alinea, and the project wasn't anywhere close at that point. But one day, they sat me down and just asked if I wanted to do it.

Chef basically sat down with some graph paper and asked me what I wanted the kitchen to look like. We drew up a bunch of versions of the Next kitchen and the Aviary kitchen, and Joe Catterson and I laid out the dining room. We drew an absurd number of seating arrangements. They really wanted me to be a part of that process.

Was the transition ever daunting?
I had been cheffing at Alinea for probably two and a half years at that point, so it just felt like another assignment. It was more like, "Let's just do this." I felt like I was just being given more tasks, so it didn't occur to me that I was doing something that different.

The opening menu was supposed to be Paris 1912 bistro food. But the more we kept working and talking, we realized that that wasn't us. It ended up being a somewhat casual but high-end restaurant.

Five menus in, are there any regrets or mistakes you can pinpoint?
As far as the actual restaurant, probably not a whole lot. Menu-wise, I'll look back at certain ones and say, "We should have done this or we should have done that." That's even the case for the childhood menu, which I loved. In retrospect, there are things that we could have done for Thailand that we didn't. I mean, it was only our second menu, but what we ended up doing to some extent was an Alinea version of Thailand. Like now, for Sicily, we're doing an authentic version of it, and that's a sign of maturity and realizing that you don't have to have some modern technique.

To the issue of timing: you have a very limited amount of days to pull off these transitions...
Oh yeah. We're like six weeks away from the Kyoto menu already!

But do you ever feel you could do something better with a few more days, or that you just need more time to make it happen?
It's just not an option. The last two to three weeks of the menu get really intense. This menu, Sicily, is the first where Chef really stepped back and said that this was ours to figure out. I mean, childhood was my concept, and Chef did the usual two dishes or so for it. Thailand he couldn't eat, because it was too spicy, but we gave him as many tastings as we could. He does a lot more of the conceptualization of it — the atmosphere, setting the stage, the feeling. He'll never let us fail.

I'd venture to say that people go to Next because they've managed to get in, since it's too much of long-shot to pick and choose which menus you want to try. So, do you sense that someone coming in for the rustic Sicilian menu, for instance, might feel disappointed or want something more modernist?
Once in a while, we read the Yelp reviews. Sometimes we find reviews where someone says that they expected something like childhood or modern, but that's not the point of the restaurant. We do run into that, and it's heartbreaking to see sometimes. You know, we're doing this pork shoulder now that's been braised in tomato sauce for ten hours, and people might still say that it's not as good, because it's not a modern interpretation.

A lot of people don't realize how much work goes into a concept. This current menu took more work for us than the elBulli menu.

How so?
Well, for the elBulli phase it was hard work figuring out the exact menu and giving an idea of the history. But at the end of the day — not to downplay it — they were sending us recipes and we were reproducing them. For Sicily, we're figuring out how to make the food, researching the country, talking to the culinary school, and sourcing all of these plates. I think that a lot of people don't realize that there was more work put into a pork dish for the Sicily menu than there was for maybe four dishes for the elBulli menu.

You've mentioned before that once the menu is in place, you can go on a kind of autopilot which then allows you to develop the next menu. Do you miss doing off-the-cuff cooking, which you can often encounter at Alinea?
That was kind of my thing at Alinea. Whenever there was a VIP at Alinea or a dietary restriction, we loved to adapt. That's probably the one thing that I miss the most.

Can you do it at all at Next?
I mean, I can if I want to for a VIP maybe. With elBulli, we couldn't at all, because it was their food. With childhood we could. It's kind of on ourselves to figure out how much we are able to change it.

Sicily is the first menu that I feel comfortable changing with the seasons, because it's the nature of the cuisine. If swordfish isn't available this week, we'll swap in a different fish. This menu does allow us to do that, but for other menus we haven't at all.

I do miss it. It's fun to walk around the restaurant, pick out a bunch of stuff, and make something. At the same time, we only have to stick to the same thing for three and a half months. It can get boring, but it gets to the point where you change completely.

To sort of fight against that, we do projects night here, like René Redzepi does at Noma. We do them every other Sunday, and that gives all the cooks the opportunity to play, create, and discuss. Some of the dishes have actually made it to the Next menus. It gives them the freedom to get away from that monotony.

Can you talk about the research process? You're doing Kyoto next. There's so much history there, so how do you manage to pull it off in a way you're satisfied with?
I went to Japan with Chef for ten days in April. Now, my sous chef is going to Japan the first week in August, just to see it. Aside from that, we have a mountain of books that we have to study. We're talking to friends we have in Japan and other chefs. A good friend of mine, who is the head chef at Michel Bras in Japan, has been studying kaiseki forever. I talk to him. For the past four weeks, we've just been sitting at tables with our heads buried in books. It's everything from the art of Japanese flower arrangement to kaiseki books to plating. A third of the books don't have anything to do with what we're putting on the plate. We just read so much. We really only cook for the menu for probably the two weeks leading up to the menu.

Do you tend to look at the projects like a student who is simply executing it as efficiently as possible, or is it ever the case that you feel intimately connected to the cuisine or culture you're tackling?
Right now we're only in our fifth menu. I think that Sicily is the first menu that we've actually felt really connected to. We have daily phone calls with people in Sicily, talking for ten to fifteen minutes to figure things out. It offers a real perspective and makes you feel part of it. This is really the turning point menu where we finally understood what we were trying to achieve — the food and the philosophy behind it.

That's where we're trying to get for Kyoto. For Thailand, it was more of that student idea, but we don't want it to feel that way for Kyoto. And that takes a lot of research, but we're starting to understand it.

What can people expect from Kyoto, and what are some menus you'd love to do in the future?
For Kyoto, I think right now our goal — which might change a little bit — is a real kaiseki menu. I think it should be like twelve or so courses. It should be a true kaiseki. There's no real food yet, but that's what we want. There are so many unique rules to it, so it's interesting to figure it out.

I don't know what we're going to do next year, but I really want to do a vegan menu. I was thinking about it, and the Sicily menu — half of it is vegan. So the more we started playing with it, especially the vegetables side dishes, I realized that. it would be really cool to showcase the true flavors of these products.

Any other menus?
I also want to do pre- and post-Imperial India, a menu that shows how the food changed with British influence.

Do you think you'll get to a point where you'll want to just do your own cooking, your own thing, and step away from this concept?
I think eventually I will. For now, though, I really don't know what my own thing is. One day Chef sat me down, realizing that I had been at Alinea for a while, and asked me what I wanted to do, and I honestly didn't know. That's why this became such a good opportunity for me to figure it out.