The Vegas Wine Scene, According to Its Sommeliers

Share All sharing options for: The Vegas Wine Scene, According to Its Sommeliers 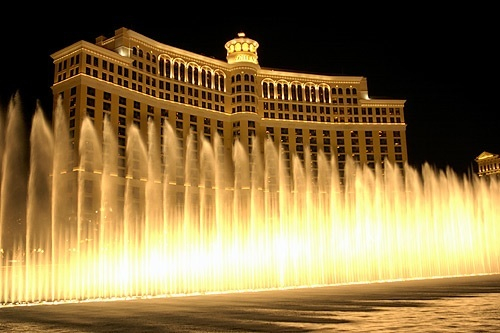 There are twice as many Master Sommeliers in Vegas than there are in NYC. The boom of new talent began with the Bellagio back in 1996 and mushroomed over the first decade of the 2000s. For such an odd place to live, there seems to be a unusually large number of sommeliers eager for a piece. So why has Vegas become such an attractive place for sommeliers? To find out Eater tapped Jason Smith of the Bellagio, Lindsey Whipple of The Palazzo at The Venetian, Rob Bigelow of Aria, and Larry O'Brien of Wirtz Beverage. Here, now, a look at how the Vegas wine scene has evolved, where it's going, and how it compares to some of America's top wine cities. 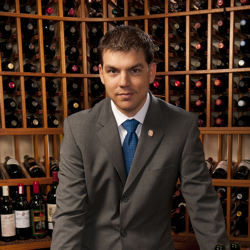 Jason Smith MS | Director of Wine, The Bellagio Hotel
What does Vegas have that other wine cities don't? In Vegas there is this huge mass of wealth that comes through one small place (somms in NY and SF might want to shoot me for saying that). You have these big casino players that have a huge chunk to spend, so you have the very high end and then you also have everyone coming in from Middle America, so you have this tremendous dichotomy from both ends of the spectrum.
As a sommelier are there any challenges that you find to be unique to this city? It's about what people are looking for here. I think people are definitely more open-minded in NY and SF, so here we have to do more of the "greatest hits," so to speak. We need to really cater to everyone in the US, whereas sommeliers in other cities have just their city to focus on; that impacts what sorts of wines you put on a list.
There are small, niche wine lists popping up all over the US. Do you see that happening in Vegas? Not that I know of. In general things are more international and California-focused than what you see outside of Vegas. I think the job of the sommelier is almost harder here. Sommeliers always want to try new things but you know if someone comes in and they aren't interested in that, you can't force them. Not that it isn't being done, but it's harder to offer something unique.
Do you see that changing? I think it's possible that you will see not necessarily wine lists that are entirely esoteric, but sections of wine lists that focus on more esoteric wines. That's happening a bit already.
Specific category of wine or a region that's hot right now? I'm still excited about German Riesling and grower Champagne. It's not new but it's what excites me. What's not? Australian wine. The bigger producer blockbuster wine, we still have guests looking for that, but for the most part the completely over-the-top wines have lost favor.
The Vegas wine scene in one word: Excitement
[Photo: MGM Resorts International] 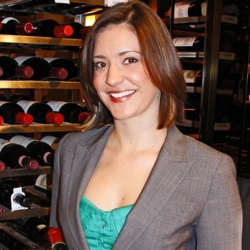 Lindsey Whipple | Head Sommelier, The Palazzo At The Venetian
As a sommelier what challenges are particular to Vegas? The biggest challenge is fighting to bring in some of the small brands from importers like Rosenthal and Kermit Lynch, as well as smaller producers from California like Anthill Farms and Gros Venture. Also, Las Vegas is a destination city and therefore when a guest comes to dine here they expect to enjoy wines they've had all over the world, so you have to have a little bit of everything.
What does Vegas lack in terms of wine culture? Many people in the US forget that Las Vegas has only been around for just over a 100 years. We are teenage city still finding an identity. If Wolfgang Puck, Larry Ruvo, and Steve Wynn didn't band together to bring great wines and cuisine to Las Vegas in early 1990s, it'd be stuck in the 1970s like Reno, Nevada. Scary thought.
What is biggest development in the Vegas scene over the past few years? The recession. It has been interesting because there are many brands being released into or pulled from our market as a result of these changes. The recession also paved a path for smaller distributors to come into the market. It will be interesting to see what happens with distribution in the next five years.
Specific category of wine or a region that's hot right now? In Las Vegas, it's Italy, California, Rhone Valley, Bordeaux and Spain. What's not? Unfortunately, we cannot sell dry rosé in this market. We have guests from all over the world and if they want rosé, they want it to be white zinfandel.
What would you like to see happen with the Vegas wine scene over the next five years? I would like to see more local artisanal wine and spirits shops. We have one dominant local liquor and wine chain monopolizing the marketplace. I think with more stores like Total Wine coming into our marketplace, it will start to break up the monopoly and pave the way for local neighborhood shops.
The Vegas wine scene in one word: Gangster
[Photo: Lindsey Whipple] 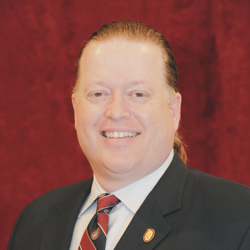 Larry O'Brien MS | General Manager, Majestic Fine Wines Division of Wirtz Beverage
How has the sommelier landscape in Vegas changed over the years? Las Vegas definitely helped establish the sommelier vocation in the United States. Prior to 1996, there were probably less than ten full-time sommeliers. As Las Vegas experienced explosive growth from 1996 through 2007, the number of sommelier positions grew at an amazing rate. Today, I would estimate there are no fewer than 50 career sommelier positions in Las Vegas.
Why do you think Vegas has become a major Master Sommelier breeding ground? As a result of the resort boom and restaurant boom—which began with the Bellagio opening in 1996 and ended with The Cosmopolitan opening in 2010—well-paying careers for sommeliers increased and the competition for these positions demanded an ever-increasing level of skill. It became essential for Las Vegas sommeliers to prove their mettle by attempting Court of Master Sommeliers (CMS) Advanced or Master Sommelier exams.
What does the Vegas wine scene lack that other major cities have? With a couple notable exceptions, the independent retail scene in Las Vegas is weak. Yes, we have a strong multi-unit local retailer as well as a well-known national retailer, but NYC and SF have a wealth of small-to-large indie retailers, which lend vibrancy of a city's wine culture.
Any perceptions of Vegas you'd like to dispel or uphold?
I am not sure that Las Vegas has a strong image within the wine trade. But the city itself certainly has a party image. And I will note that Vegas is littered with the bones of many skilled sommeliers that fell prey to its excesses. If you try to live like your guests or a high roller, you will crash and burn.
Specific category of wine or a region that's hot right now?
Cabernet remains king. Italy is clearly the hot category. All things Italian. Pinot Noir is also growing well. What's not? Bordeaux and Burgundy seem to have lost a bit of momentum, but that is just my opinion.
The Vegas wine scene in one word: Professional
[Photo: Gina Taro Photography] 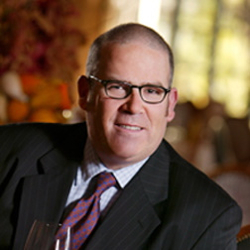 Rob Bigelow MS | Director of Food and Beverage, Aria
What does Vegas lack that other major US cities do not? Because we are still building sommelier culture here—I mean, the new wave of sommeliers is only about a ten to 12 year trend—our community is large, but it's not as well established as, say, New York. Vegas is also a weird place to live and it does gobble up some people. So it's a challenge to keep people here.
When did Vegas become a real magnet for sommeliers? It really started to flow with the Bellagio. We established a culture there and sommeliers knew that it was a place that supported study. It's also lucrative. Because you are in the tip pool [at least at the Bellagio] and not paid as a manager, guys and girls can make high five figures as a floor sommelier, some pushing into six figures, as an hourly employee. And it's only an eight-hour gig. That varies from property to property, but?
What are people asking for the most right now? Malbec. And American pinot noir has taken off as a sort of gateway red wine in place of merlot.
What would you like to see happen within the Vegas wine scene over the next five years? We've had a lull in new Las Vegas Master Sommeliers, but we have a great crop coming up and I think we'll have 15-20 New Master sommeliers over the next five years.
The Vegas wine scene in one three words: Smart. Big business.
[Photo: Rob Bigelow]