Dave Beran on Alinea, Grant Achatz & His Road to Next

Share All sharing options for: Dave Beran on Alinea, Grant Achatz & His Road to Next 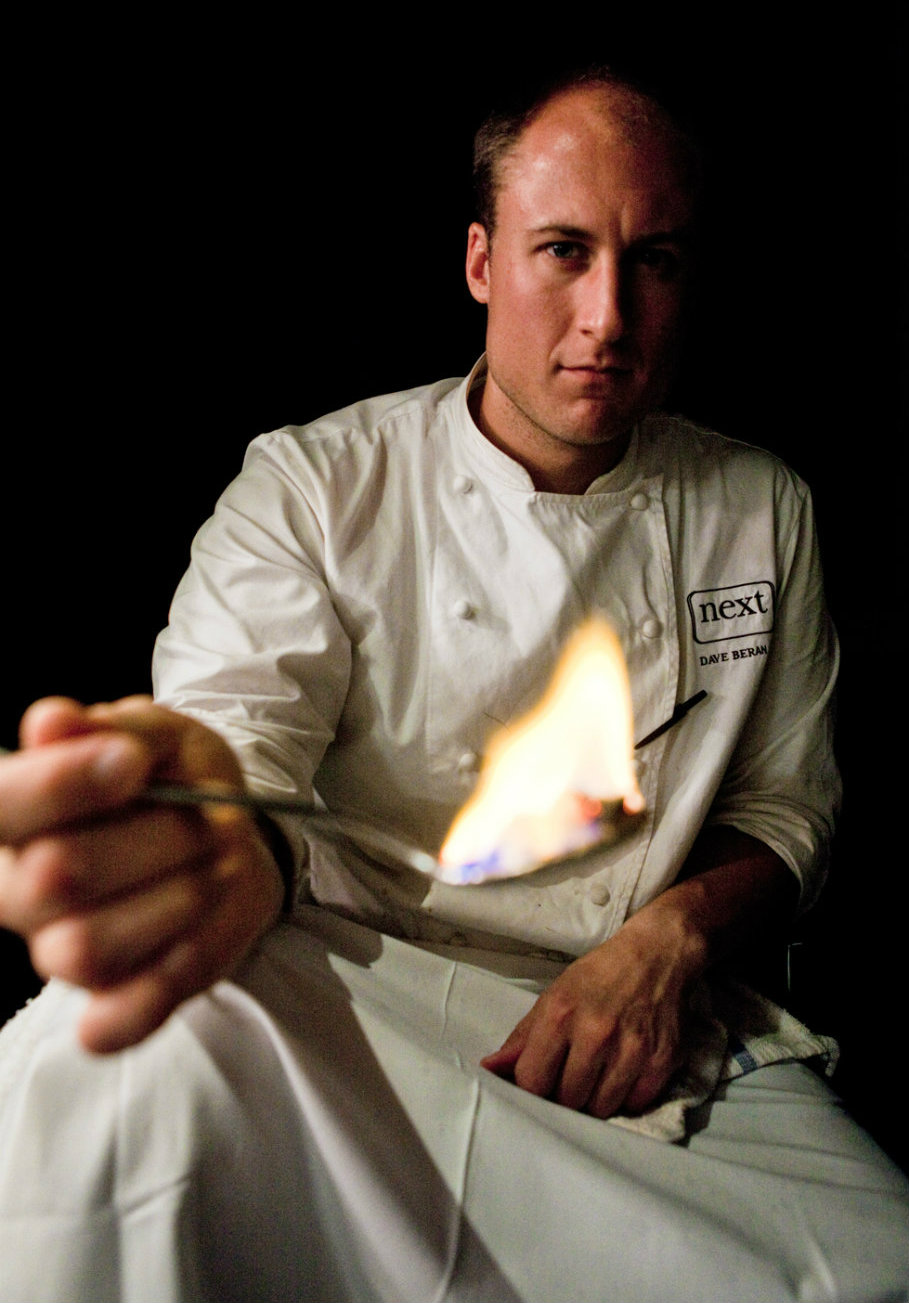 Dave Beran runs the show at Next, the ambitious restaurant Grant Achatz and Nick Kokonas opened last year that instantly became the most sought-after reservation — or ticket — in the United States. As executive chef of the restaurant, he's tackled cuisines as wide-ranging as elBulli, Escoffier, childhood, Thailand, and, most recently, Sicily, all in about a year's time. For each incarnation, he and the team have earned raves from the Chicago Tribune, as well as virtually every other local and national publication that's written about the endeavor. But his current role isn't the subject of the first part of this interview. Instead, here we talk about Beran's path to Next — getting into cooking, drunkenly sending a resumé to Alinea, where he would end up ascending the ranks to chef de cuisine relatively quickly, and having Grant Achatz as a mentor.

How'd you become interested in cooking?
My father teaches hotel restaurant management, so I kind of grew up in and out of his work kitchens. I spent a lot of time with him, so I was always around kitchens without necessarily doing anything in them. It became a very familiar environment.

I went to college to study business — well, really to play hockey and I ended up majoring in business. One summer my dad came to Chicago to see the restaurant scene, and I went with him to eat at a couple of restaurants. I just fell in love with it and decided it was what I was going to do.

I was supposed to start culinary school after college, but I didn't know where to go. So I applied at a couple of restaurants and got a job.

And how long did it take you to get to Alinea, where you eventually became chef de cuisine?
I was at MK for a year and a half, then I was at Tru for a year before I got the job at Alinea.

When I worked at MK, I applied to Trio when Chef [Achatz] was there but never heard anything back. Then, when I was at Tru, I heard that Alinea was opening. I applied immediately, didn't hear anything back. A year into being at Tru, when I had developed a really good relationship with the chef there, I started talking to him about what I wanted, and he tried to set me up with a stage at the French Laundry. So I was either going to go to Robuchon in Vegas or the French Laundry.

The Atelier or the fancy one?
The fancy one. So, I was going to go to those two places, and I guess I thought French Laundry could be my stepping stone to get to Alinea. I had my plane tickets set up, and one night when Tru was closed, I went out drinking until about 4 AM. I got home, was a little drunk, and emailed a resumé to Chef at like 5 in the morning. I woke up to a phone call from him at 10.

We spoke, me in my groggy state, and he was going to set me up a stage. It's a funny story: I was going to go Alinea that following Sunday with my girlfriend, so I told him I couldn't start that day for that reason. He took it as me saying, "I need to check out the restaurant before I actually work there." But really, I was just going to dinner there.

I went the following Sunday for dinner. To this day, it is the best meal I have ever had.

What made it the greatest meal of your life?
I had eaten at MK, and that was the meal that made me want to cook. I had eaten at Tru, and that was for me the pinnacle of fine dining. Then I went into Alinea — you know, Tru is undoubtedly very choreographed and the service is impeccable — and found it to be a perfectly crafted, organic experience. The food, the dining room, the way the servers approached the table, the emotions, the way stories are told — it was like nothing I had ever had. It changed the way that I thought about food and dining, and what they can be capable of.

How was it when you finally started working there?
I started at Alinea as a food runner, because there was a line to get in the kitchen. I remember when Chef told me that on the phone: I hung up and was really pissed off. That's what I'm going to start as? I didn't go to that restaurant to be a food runner. I had just turned down a sous chef position!

As it turned out, the food running experience brought a lot of things into perspective and gave me a great understanding of how an experience is crafted between the connection between the front of house and back of house. That had never occurred to me until I worked at Alinea. Those four or five weeks were the best learning curve I've ever had.

And when you got into the kitchen?
Every day I felt like saying, "I'm done. I can't do this anymore." It was so hard, so intense, so much work. I only picked up one dish when I started in there. I think it had about seventeen components on it. I kept thinking, "This is the hardest thing in the world. I'm never going to get it done." My goal everyday was just to not have someone help me. I just wanted one day where someone wouldn't have to help me. It took about two or so weeks to get to that point. And when I got there, after having to do meticulous checklists and schedules to make sure I was on top of everything and timing it right, Chef called me upstairs and gave me a new dish. that one had eighteen components on it.

I said "Yes, Chef," but I thought to myself, "This is the day I die." I felt like I was going to tell him that he beat me, he won, and that I had to give up. But about three months in, it all made sense.

How many people can't cut it when they go work there?
So many. It's funny: before I left Alinea, my sous chef and I sat down at Big Star to have some drinks. He pulled out a napkin and we wrote down the names of the people we remembered having dropped out of the restaurant. It was something like 84 names. It was absurd. "Remember this guy?! And that guy?!"

Whenever I'd sit down with an applicant, I'd tell them that this wasn't that magical place on the mountain that everyone thinks of it. Some people have this notion that we have this glamorous life where we sit around the table and talk about ideas and brainstorm. It's not like that. It's really, really hard work. A lot of people hope to get to that point, but they underestimate what it takes to get there.

Do you think it's a misunderstood restaurant in some ways?
I do completely think that. A lot of restaurants like Fat Duck and elBulli are, I think. When I dine at places like Fat Duck, yeah, they're using modern cooking techniques, but it's mostly about the experience. It's about crafting a moment in time for people.

Well — and I'll openly insert my own bias here — I'm more interested in the question of flavor. You hear a lot of people talk about science and tweezers, but there's a serious emphasis on taste at Alinea, in my opinion.
The dish that is the perfect example of that for me is a preparation of cauliflower. There are five pieces of cauliflower, each coated with a different flavored powder, and then just an apple and onion soup with it. It's really simple.

When I first saw Chef make that dish, he made the cauliflower velouté from French Laundry. It's this absolutely delicious, creamy cauliflower soup. Then he put the powder and gel in, and that was the showcase of what was different from what we were doing and what other places might do.

I think that the problem is that a lot of people haven't eaten there or experienced it. It's very difficult to convey an experience. Things like the antenna — people will say, "Oh my god, there's this weird wire they are serving the food on" — but what they don't realize that the point isn't to shock you with the wire. It's about breaking up the monotony and making you look at what you're eating.

Finally, before we move on to Next, can you talk about having Grant Achatz as a mentor.
He and I are really good friends at this point. He's there, whether it's to shoot the shit or to have a mentor conversation. He's been there for me in many capacities.

As a chef-teacher, he's not the chef who will walk over and spend time to teach you or hover over you. He stands back and watches. I've worked for several chefs that stand next to you and walk you through everything, but he stands back and allows you to learn it. And also, you learn a lot watching him work.

The guy is always striving for perfection. There is never compromise in anything, whether it's a course for Thomas Keller when he is in the dining room or staff meal. It always has to be perfect. That's what makes him difficult to work for for some people. In a lot of cases, you could say that something could be great done a certain way, but it probably isn't good enough for him.

Tomorrow, in part two, Beran talks all about Next: surprises, regrets, the research process, and potential future menus.