How to Get Into the Adriàs' Tickets and 41 Degrees

Share All sharing options for: How to Get Into the Adriàs' Tickets and 41 Degrees 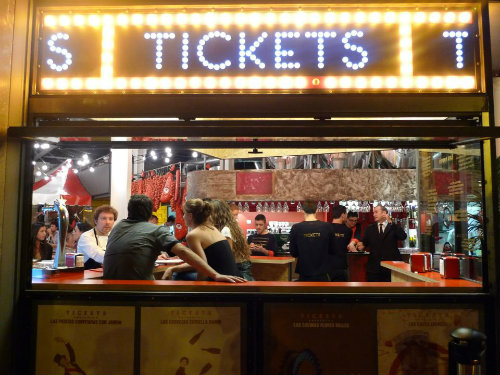 Just over a year ago, the brothers Ferran and Albert Adrià opened up a pair of businesses — Tickets, a restaurant, and 41 Degrees, a cocktail bar — in Barcelona's theater district. Tickets, which has about eighty seats, almost instantly became one of the world's toughest reservations. The more intimate 41 Degrees gradually went from being a place to drop in for a drink (or to find a way into Tickets) to a sixteen-seat restaurant with extended tasting menus. Just weeks ago, the space entered its newest stage, "41 Degrees Experience," with a ticketing system, 50-course tasting menus, and a remodeled space with an audiovisual component designed by two Spanish artists. In the following interview, co-owner Juan Carlos Iglesias provides up-to-date information on the reservations systems and explains the best ways to get in.

How big is the dining room?
We have room for eighty people.

How come?
When we had a three month window, we had to deal with a lot of no-shows. The restaurant would get completely booked up because people were excited to get a chance to eat here, but when the time came, they couldn't make it and wouldn't cancel beforehand.

People have criticized us for the reservations system, saying it's exclusive, but I'll tell you that it is democratic and transparent. Here's how it goes: we put up 80% of the tables for each night on the online reservations system. The other 20% we set aside for friends, colleagues, or visiting journalists who are writing about the restaurants or the chefs and should check out what we offer. For instance, my brothers and I also own Rias de Galicia, a classic seafood restaurant in Barcelona. I have regulars who have been coming in for years and years. If they want to go to Tickets, I have no shame in saying that I will do my best to squeeze them in.

It really is first-come, first-served. We've tried to make it as smooth, clean, and fair as possible, but with that much demand, not everyone will come out happy.

I interviewed Albert over the summer, and he brought up the fact that there were a lot of no-shows.
Yes, that was true, but it's gotten way tighter recently. The other day we found ourselves with around fifty people standing outside without reservations, hoping that someone would cancel. And that's a real shame, since we usually can't accommodate any of them. People will point out empty tables in the dining room, but that's because we try to spread out seatings throughout the evening. It's difficult for the kitchens to nail this menu if they're overwhelmed.

I do think this is about as good as the system can get. We don't discriminate based on anything and welcome anyone who goes through the same process and lands a table.

So, if you can't get reservations through the website, is there any other way of getting in?
It's really, really tough, but there are three things I would suggest: 1) If you want to come in earlier than two months, visit the website a few times a day and try to spot dates on the calendar that are in black; those have opened up due to cancellations. It does happen. 2) There's a high chance that it won't work, but in the event that someone cancels very late on the day of or simply doesn't show up, we will take people who swing by. We try not to encourage that for obvious reasons. 3) If you're visiting Spain and decide to come into one of our other restaurants, like Rias, and we happen to be there, say hello. I can barely accommodate the friends that want to come to Tickets, but I'll take a look and see what's possible.

That last point, of course, is not a guarantee and not always available. I just say it because it really does make all of us sad and frustrated that we can't accommodate everyone. It gets really overwhelming. Even with a secretary, I can't respond to all the emails and personal reservations request coming into my office. And that's just me! We're trying our very best.

And now to 41 Degrees.
We're using a new system at 41 Degrees Experience. It's our own system.

At this point, we're putting every single table online and not saving any for ourselves. There's also a three month window, but we're considering extending it to six months.

This is a much smaller space.
It's sixteen seats. We have three four-tops and two two-tops.

You've adopted a ticketing system similar to the one at Next?
Yes, you have to buy tickets when you make the reservation. It's a three-hour meal, at least, and the menu is 200 Euro. If you want a beverage pairing, it's 245 Euro. We can't handle cancellations here, since there are more people serving and cooking than there are customers coming in for the meal.

Is the demand ridiculous?
No, we put the new reservations up just a few days ago and we have plenty of openings at the moment. We haven't publicized this yet.

This project is the culmination of what Albert has been working towards for about a year now — turning the cocktail bar into an intimate tasting menu restaurant. Can you talk a bit about that?
Yes, it's 41 Degrees Experience now, officially. It really is completely different from what was going on in the fall with the 41-course tastings. For one, the space is totally transformed, with an audiovisual sculpture, "Frozen Rain," and new design. We want it to be a "total" experience. The vast majority of dishes is completely new, except for a few staples that have to be on there. This really is a new project, and we hope to turn it into one of the greatest restaurants in the world.

Ferran actually came in the other night for dinner. He bought a ticket online and came in as a customer to see how the experience was. He was floored.