The No Reservations Penang Episode: Just the One-Liners

Share All sharing options for: The No Reservations Penang Episode: Just the One-Liners

The last season of No Reservations continues — and last night's episode found host Anthony Bourdain in Penang during Chinese New Year. (The Penang episode is the final one before No Reservations returns either this Fall or early 2013.) There were spicy noodles, fish, jet skis, "octogenarian breakdancers," a pedicab covered in fake flowers, and lots and lots of monkeys. Also, turns out he has a secret Popeye's habit. Now, on to the Quotable Bourdain — feel free to leave your favorites in the comments below. 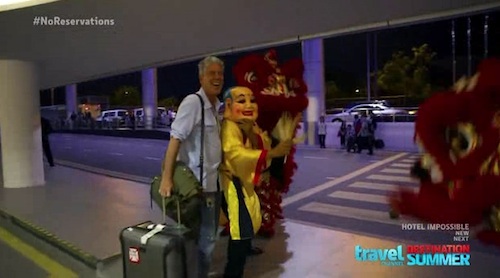 1) On secret food habits: "I had nothing but — I had Popeye's Fried Chicken this morning."
2) On the draw of Penang: "This part of the world really messed me up. It's the condiments here, the chilis. Once you have that, there's no going back." 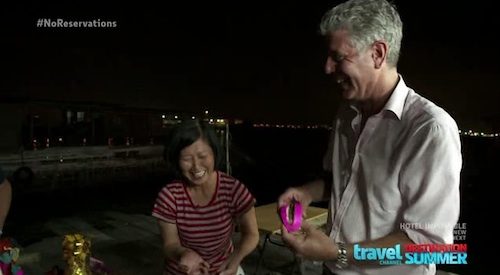 3) On good luck buns for Chinese New Year: "I'm not usually a fan of hot pink-colored food, but there's pork. Always a saving grace...It looks like a Hostess Snoball."
4) On his camera angle preferences as he gets older: "Ordinarily I don't like talking to the camera. I find it stagey, awkward, and increasingly painful."
5) On what he might do if he ran the world: "Imagine a world without traditional fast food outlets, the usual suspects clogging up our mini-malls. Imagine we had individually owned and operated joints serving stuff like this all over America. Can you imagine how delicious that would be?"
6) On what a delicious bowl of noodles can do to a guy: "Wow, I almost said 'yummy' there. What the fuck is happening to me?" 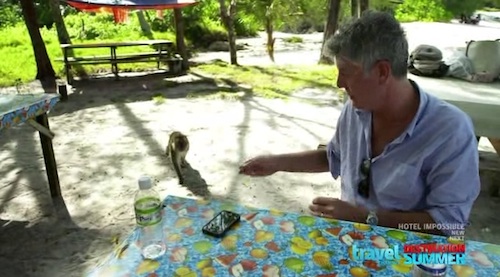 7) On knowing your enemy: "It's all about trust. And when it comes to monkeys, I have none."
8) On the monkeys' cute factor: "They're constantly erect and they like to throw feces. Ain't nothing cute about that."
9) On those who might say monkeys are cute: "You say that now. Wait til they're humping your earhole, shrieking at the top of their lungs."
10) On the evilest monkey of all: "There's a ringleader in there. Jojo, he escaped from the circus years ago and holds a grudge against the human race."
11) On monkey tricks: "Monkeys can be trained to attack human penises."
12) On the best part of shrimp: "BRAINS." 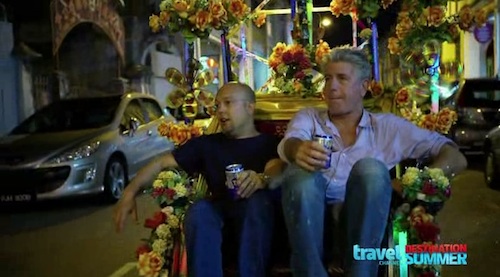 13) On the pedicab: "David's choice of vehicle is, I don't know, a little much... a rose-scented death trap."
14) On the pedicab, again: "I feel like Liberace's wedding here."
15) And again: "A pit-stop for beer helps with our gardenia-carpeted chariot."
16) On the Red Garden hawker market: "While octogenarian break dancers bust a move on the dance floor, we get crazy with the food." 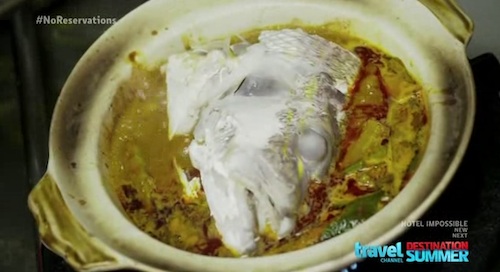 17) On fish head curry: "Around this part of the world, that is some legendary, fundamental shit, my friends."
18) On fish head curry, again: "It's not even about the fish head. It's about that liquid, it's fucking awesome. I'm getting high off that shit."
19) On nasi kandar stall Line Clear: "Lots of people, lots of food, lots of cats. The cats are a good sign." 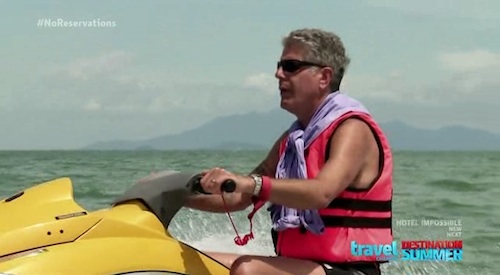