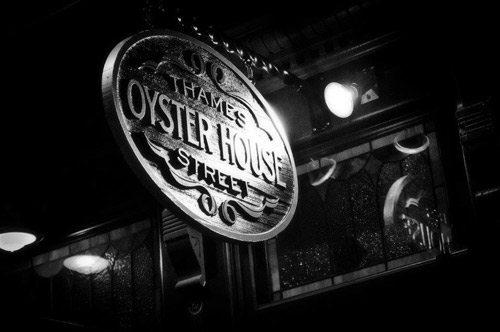 It's been a year since first-time restaurateur Candace Beattie opened her raw bar Thames Street Oyster House in Baltimore's Fells Point — a year in which she's learned many of the perils that come with owning a restaurant. As with so many places, the buildout was "a nightmare," which in Thames Street Oyster House's case involved permitting problems, street flooding and fire marshals. But locals and tourists alike to the raw bar once it opened last summer with a menu from chef Eric Houseknecht that mixes New England and mix-Atlantic takes on seafood. Here, Beattie talks about the first year and her belief that seafood-loving Baltimore has been surprisingly underserved when it comes to seafood restaurants.

So how did the concept come about?
I'm from here, but I lived in Boston for almost 10 years. I grew up here eating seafood and raw bar was always my favorite thing. Up there it was everywhere. I worked in the music business for a little while, decided I hated it, was in restaurants since I was a teenager and decided it was what I really wanted to do. So I came back home where it was a little bit more accessible to do something. There was nothing really around here at all that was like what I wanted to do. So I started looking for a place, which took me years, and jumped in.

How is Baltimore more accessible?
Well, one, the rent and the start-up in Boston is just so much higher. But also Baltimore still has a lot of room for a lot of concepts that haven't even happened here yet. It's up-and-coming in the restaurant scene, whereas somewhere like Boston has 10 raw bars already. So there's a little more room here for new concepts, for new restaurants in general. And my family was here to help me out. It just kind of made more sense.

And so how did the buildout go?
It was a nightmare. We got the building gutted. No utilities whatsoever. We upgraded the water service coming in, the electric coming in, so it was a full, full buildout. We had space issues, layout issues, the property is landlocked but there's no way to exit from anywhere but the frontage on the street. So that was a huge challenge with the fire marshal. We ended up having to build this fire hallway through the entire building, which took up a lot of space. It took us four months to get permits from Baltimore City. One day the the city contractors that were working on the water nicked the main, flooded the whole street in Fells Point and shut down the water to three city blocks.

There were all sorts of escapades that happened throughout the buildout. When it was done it looked great and turned out really well. Coming up with all the design-type stuff was a challenge to find what you wanted within your budget.

How did you approach the design?
I tried to keep in mind the fact that Fells Point is pretty casual. But definitely wanted a more upscale place. I knew the look I wanted for certain decorations, whether it be light fixtures, finishes, all that kind of stuff. I spent many years of my life going to other restaurants and getting ideas and pulling from this and that and the other. We have a lot of interesting stories behind a lot of things in the restaurant. I have pieces of furniture, some of my tables are from three other restaurants or bars in the area. It was a little tough to piece everything together, but I think it came out really nicely.

How about your menu-planning?
I had a general idea of what I wanted to do. And then my chef [Eric Houseknecht] is amazing. He had a similar background. He's from here, but he lived in Providence for a long time and came back. So he was very familiar with what I was going for already and he has an insane knowledge of seafood and everything culinary relating to it. So we knew, for example, we wanted to do a New England lobster roll, but the hot buttered version instead of the cold mayonnaise version, which is different from a lot of places. We knew certain things that we wanted to have, some seafood standards and then some fishes that really aren't around here anywhere. And then we wanted to do a certain style of crabcake that's different. It's more of an Eastern Shore style. We wanted to do some Maryland standards, but then also some New England dishes, too.

Tell me about your opening.
It's funny, the chef and I talk about it like it barely exists in our minds. It was just such a whirlwind. We were fighting permits and inspections and all that sort of stuff, so getting open it was so, so delayed. The second we were allowed to open the doors we did and it was hard to coordinate everything. We got our liquor deliveries the day that we opened and it took the entire day to unpack it. We opened on a Monday and did a friends and family thing and pretty much everyone that I know in Fells Point came. It was an amazing feeling. Everyone was just so supportive through the whole process because it was so hard and drawn-out. We had a slow first couple of months and then we got really busy a lot quicker than I thought we ever could.

What changed that?
I don't know. I'm sure there's some element of people walking by our building in the neighborhood for a year and a half wondering what was going to happen there. Before that the building had been boarded up and worked on and boarded up again. And we had all the issues that delayed the process for so long. So I think it was anticipated a little bit at least with locals. When I came back, I thought immediately that it was odd that there wasn't a million seafood options around here in Baltimore because it's a very seafood-oriented town. So I think it filled a need.

Right, that is odd. There aren't others in your neighborhood?
There are. There are two that are very fine dining, there's one that's more casual. But you would think that if a tourist came to town and said, "Where is a good seafood restaurant?" that you would have a list of 30. And that's not necessarily the case. We have a lot of crabhouses and we have a lot of crossover places.

And what are some of the things you've learned through the year? Have you made any changes?
I'm learning now that I can't work every day. I just had my third day off in a year and it takes a toll. We have incredible challenges on the culinary side with hiring. It's a business where there tends to be a lot of turnover and we've been really lucky with most of our people in that they've been there from the beginning and we have a really amazing team. But it's always hard as we get busier and we need to hire and train and watch over.

And what's next for you and for the restaurant?
We have space issues with the back of our house. If some magical extra little room came along that we could expand some of our back of the house function that would be amazing, but for right now it's so new that this is all we're going to concentrate on for awhile. I think it would be amazing to open something else in the future, but I think it's a down-the-road kind of thing.