Jacques Pépin on Cookbooks, Craig Claiborne, and Cooking as Long as He's Hungry

Share All sharing options for: Jacques Pépin on Cookbooks, Craig Claiborne, and Cooking as Long as He's Hungry

The final interview from the Eater Lounge at the Food & Wine Classic in Aspen: chef Jacques Pépin. 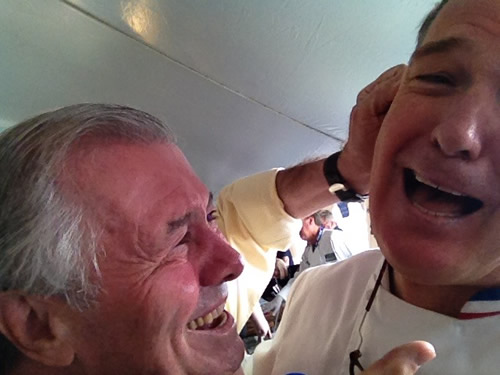 How many years have you been coming to Aspen?
Well, I believe it's either 27 or 28 years for me, out of 30. I do remember that I was walking up the mountain 28 years ago.

Has it changed a lot?
It has and it hasn't. It has gotten more sophisticated in some ways, but still. It's smoother and smoother all the time but in my opinion, out of all the different ones — from Pebble Beach to New York to LA, now, to South Beach — this is the best. The best because we have Aspen, the flowers and everything, but also that no one has a car here. It's kind of a triangle between the Jerome, the St. Regis and the Little Nell. I mean, I must have taken 30 pictures of my way here because people are around, walking in town. But in New York people come out of events, they just disseminate throughout the city and disappear.

And of course there's a great deal of talent here, there's terrific food, we had a great lunch at the Jerome yesterday and today. There was kind of an open lunch, it was really nice. You can't beat the Publisher's Party on top of the mountain, it's a stunning place to go. It's like a reunion, I meet people — I don't know if any of them were here 28 years ago. Very nice. I think I must have come ten times with Julia Child, and then she didn't want to come because she couldn't breathe well. My wife came with me only once or maybe twice, and she couldn't breathe. But Claudine, my daughter, has been coming here at least 15 years, and Jean-Claude, my friend, has been coming with me, what, 15 years?

So have you read the Craig Claiborne bio that just came out? You're mentioned a lot in it.
Yes, I did. I did an article in the New York Times, what, three weeks ago, in remembrance of Craig, so I knew that guy, Tom McNamee. He interviewed me a couple of times. So I read it, yes.

Are you a fan?
Yes and no. It's factual, it's true. But I would have liked to have finished the book with a better taste in my mouth. I think that, you know, his alcoholism and homosexuality and many other things, everyone knew about that, they had to be said, without any question. But somehow if you want to epilogise someone like he did here, I think that the taste of it at the end should have been more optimistic or maybe a bit more rosy.

How do you remember him?
I remember him as someone extremely generous. I mean, I got married at Craig's in 1966, 45 years ago. He did the wedding, he did everything. I came here in 1959 and I met him a few weeks after. He came to Le Pavillon to do an article with Pierre [Franey]. And from that time, prior to the time I was married, I spent many of my weekends in the summer going to Pierre's house in East Hampton and Craig's house as well. And I use to stay there, I remember incredible dinners. Maybe the biggest influence on my professional life in the US — see, with someone like Pierre it was different, he was trained like I was trained so I kind of coincide with him in many ways. But for Craig, that kind of openness, that American way of receiving people, the kind of freedom with it. The different ethnic foods that I met with him, the diversity and the casualness of it. That was very influential to me.

Let's talk about your most recent book, Essential Pépin. I understand you pretty much did everything for the book? Copywriting, recipe testing, all of that?
Yes, I started with maybe 2,500 recipes because this is a compilation of books which have been out of print for years. I had to choose, it was a conundrum. Do I leave it the way it was? Just to give people an idea of the time, you know? Or do I make it more usable, retest it? And I chose the second option. And then I did the illustrations because we decided not to take any pictures, so I did about 250 drawings. Maybe the best part of the book is that three hour DVD that came along with the book and that's why we didn't do pictures of food.

It's interesting in that I am often looked at as the quintessential French chef, and then you look on page 25 and I have black bean soup with bananas and cilantro on top because my wife was born in New York to a Puerto Rican mother and Cuban father. And then you find ceviche, or Southern fried chicken, or any of those things. In a sense, it's a very American book because it reflects my trip, if you want to call it that, of the last 50 years. I don't say that it's not French at all, I am not trying to be French but I am not trying not to be French either. I don't really think in those terms too much any more.

I have another book coming out in the Fall. Not a new book, it's La Technique which I did in 1975. Now we have put it together again using photographs in color to make it a bit different, and a bit better with color pictures. I am in the process of editing it and working on it now.

In my opinion the best book I ever did was called The Art of Cooking, two large volumes I did in the mid-80s. We did 34,000 pictures over a five year span, and we broke it into two books with 15,000 pictures each. The book has been out of print and we're using a great deal of those color photos to replace the black and white in La Technique.

That's fantastic, because looking at the black and white photos sometimes it's hard to tell what's going on.
Yeah, it's not easy. That's why the DVD actually in Essential Pépin is the best because if I have to tell you to do a coronet with a piece of parchment paper, it's like okay, fold it at an angle then fold it in the center, at the hypotenuse if you want, it'd be like what is he talking about? You see oh yeah that's it! You know, I bone out a chicken or make an omelet or make a caramel or all of those things which are very visual. And it doesn't really change, I mean as I say we are republishing La Technique and those techniques are really the same. It's also why I don't think Kindle, those things will replace the cookbook. Because those thing you have to operate all the time, it's not convenient to have in that form.

José Andrés asks you: How do you feel today after you've been such an inspirational force to millions of people in America, because of your shows, your teachings, your books, but still manage to be so humble and down to earth?
Well, I'm not really humble. Down-to-earth, yes. I'm very pragmatic, maybe. I don't know, I look in the future and I think it was Sartre who was asked "What is your best book?" and responded "The one that I'm going to write." And in that context, you know, you finish a book, you look for the next thing. Of course I'm getting there in age, but my health is fine. I had a hip replacement last year and another the year before, but I had a bad accident in my 40s. So now I'm paying for it, but sure, as long as I can continue moving around, I'm going to keep cooking. As long as I'm hungry, I'm going to cook something.