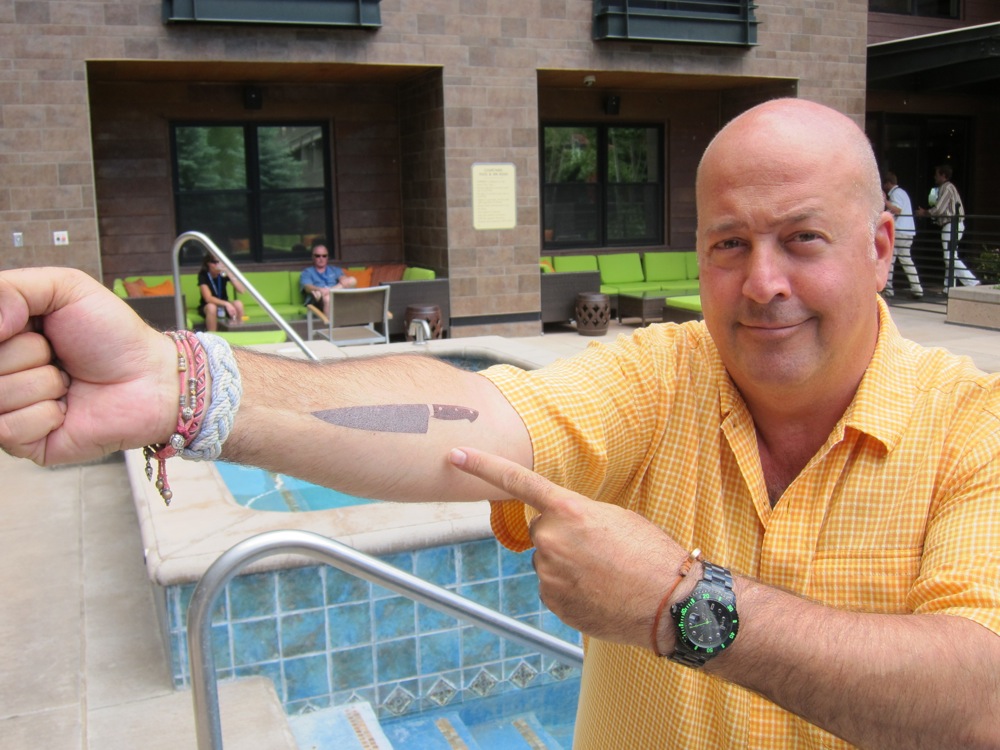 What's that status of Bizarre Foods? The next season starts July 9 in in Las Vegas with our 100th episode. It's two hour Bizarre Foods block to kick off the season, and Austin is there with San Diego, Central Florida and my LA pop-up espiode.

What did you think of Austin? That place is so good, it's so vibrant.

What'd you do out there? I went on a deer hunt in Broken Arrow Ranch — great people, and they're doing such a unique thing by bringing the processing facility, in a truck, into the field. It gets the animal skinned and dressed and in the cooler so quickly because they're bringing the facility to where the animal was shot. They're harvesting in a unique way with silenced, high-power rifles. And I know that sounds graphic for some people, but this is not hunting or sport — this is a farm that's thousands and thousands of acres — they eat in the wild, they fornicate and they're happy. When they're harvested, it's done so quickly. In the wild, when deer hear footsteps, they run, but here, they're so used to it that the hunters can go right up to them

With the high-power riffles and scopes, they can be far enough that the animal is put down humanely. It's just incredible, and it's why their meat is so much better than everyone else's. Then I got with Rene Ortiz from La Condesa, who I think is one of the true under-rated geniuses in the food world. We cooked lunch together there and we went to Odd Duck, East Side King and to a lot of the great food trucks and carts.

Also Pig Vicious. We went to Barley Swine — I ate there, but we didn't put it on the show. It was amazing. We did them at their truck instead, and used it as a jumping off point for the trucks part. We worked with Ned at Foreign & Domestic on some food stuff there. We did a bunch of night stuff with Bridget Dunlap who owns a bunch of places in town. It was just a great trip — Contigo, too.

Here's what I love about Austin: We go to Contigo at like 6 in the evening to shoot, and the whole point is that they do a bloody mary there what when they get meat deliveries, they get the blood and they actually put blood in the bloody marys and they've been doing it that way since they opened. So I wondered, who's ordering this thing? And the answer is no one, but I wanted to try it. So we walked in there and sit at the bar, and it's kind of a hipster afterwork bar kind of deal. And outside, all the tables have families that are all eating roast chicken on the platter. There's like 50 kids out there, and when they leave, they're replaced by the young eating crowd that kind of made it what it is. I was just so impressed with a restaurant that could be so many different things to so many different crowds. That's the nature of Austin in general — all of the restaurants play double duty. I think it's really unique.

What's in the LA pop-up episode? Ludo? Well no, what we did was — and you know because you're putting out content every day — you get to a point where you know a lot of other people are reporting about the food in LA, so how can you do it differently? So I decided, let me do a pop-up restaurant, and let's tell the story of LA food through the eyes of me getting ready for the pop-up. So we met with Ludo, since he's the king of the pop-up, and asked, "How do you do one?" We got advice from people like him, I went shopping at places like Lindy & Grundy, the butcher shop, Ink. with Michael Voltaggio and places like Animal to check out the scene and get educated on the current LA style so I could execute a pop-up. I did a seven-course menu for 150 people in Culver City at an art gallery and it was awesome. We almost got shut down but the police, but you'll have to watch the episode to figure out why.

So there's not a lot of information about Minni Bar, your new airport project... Because it's technically not open until August in Minneapolis. The one that we're doing in LaGuardia, which is called Interwich — well, I'll preface it — I'm doing sandwich shops in airports. I'm partnering with OTG, which is the like the modern incarnation of HMS Host, the people that used to dominate that business. And OTG has decided to hook up with people like me and chefs that are located in certain cities to do their food, in the airports. When they asked me to get involved, I said the only thing I'm really interested in is that I'm a traveler, I want to be able to grab a great sandwich and get on the airplane. So, they said fantastic.

So I developed this menu with 20 sandwiches with influences from around the world, and they're going to be serving them both in Minneapolis Delta G concourse and the new Delta concourse in LaGuardia. Both in August. We went through a food testing phase, we did some sampling of the sandwiches in LaGaurdia just to make sure everything is on the up and up. The bar part is up and running because they have the actual front of the house space designed and ready, so like any good business person they want to get the cash flowing, so you can buy beverages at Minni Bar — which by the way, has nothing to do with legendary Jose Andres. I haven't been in the restaurant business for 12-15 years, and I had that itch and I get to scratch it by doing these great sandwiches.

What kind of sandwiches? It's a lot of fun. I did a tonkatsu sandwich, the Japanese pork cutlet, serving it on soft white bread with a Japanese cabbage slaw and a salty and sweet Japanese preserved lemon, and a little bit of the bulldog sauce that's traditionally goes on on tonkatsu. We're doing a Scandihoovian, you know, in tribute to Minnesota, with a dill shrimp salad on one side and smoked salmon on the other. Also a Swedish meatball sandwich on potato bread with lingonberry preserves and gravy. Instead of a meatball sub. We have certain things that are germane to each location. Knock on wood, it's successful, and I get to do thousands of them around the world. It's a fun thing, a little sandwich shop, it's gonna be traveler-friendly, which is important to me.

What's the price point? Low for airports. Which is under ten dollars. I think there's one or two super-luxurious rare roast beef sandwich I think will be 12 or 13 bucks. And of course it's a sandwich shop so we're doing ice cream sandwiches.

And they both have bars. It's an airport.

Did you have any input on the drinks? I couldn't care less, I've been sober for twenty years, and I'm the last person to have any mixology. There are so many people doing good work in that field, I just said let me have a good root beer and good vanilla ice cream so I can make a good root beer float for my kid and I'm happy.

Question from Bobby Flay: "Do you consider yourself a chef or a professional eater?" Great question. I consider myself a chef. I think like a lawyer or a doctor, whether you're practicing or not, you do not lose the title. I've been cooking since I was 14 years old. I was doing an interview before, and somebody saw me chumming around with my old boss Thomas Keller. They said, "I didn't know that you know him." I said, "Know him? I worked for him." I'm 51, I had the opportunity when I was coming up in New York to be working alongside some of the best chefs in the world when we were all line cooks.

I've been without a stove for about nine, ten years now. There's a whole generation of folks who have been turned on to my product who only know me as a professional eater or writer. They don't know me as a cook. The fun thing for me, as someone in the food business, is that I can go back again and do demos and stuff like that here and show people that there's another side to me. We're doing a cookbook after my kids book comes out in October. It's weird, one of the big things that I've tried to do that last three or four years is remind people that I'm a chef, not just an eater. But you paint a thousand pictures in life, no one calls you an artist; but you eat one coconut grub, and forever you're the buggy guy on TV.