Share All sharing options for: José Andrés on The Bazaar at SLS Miami and the Future of America Eats Tavern 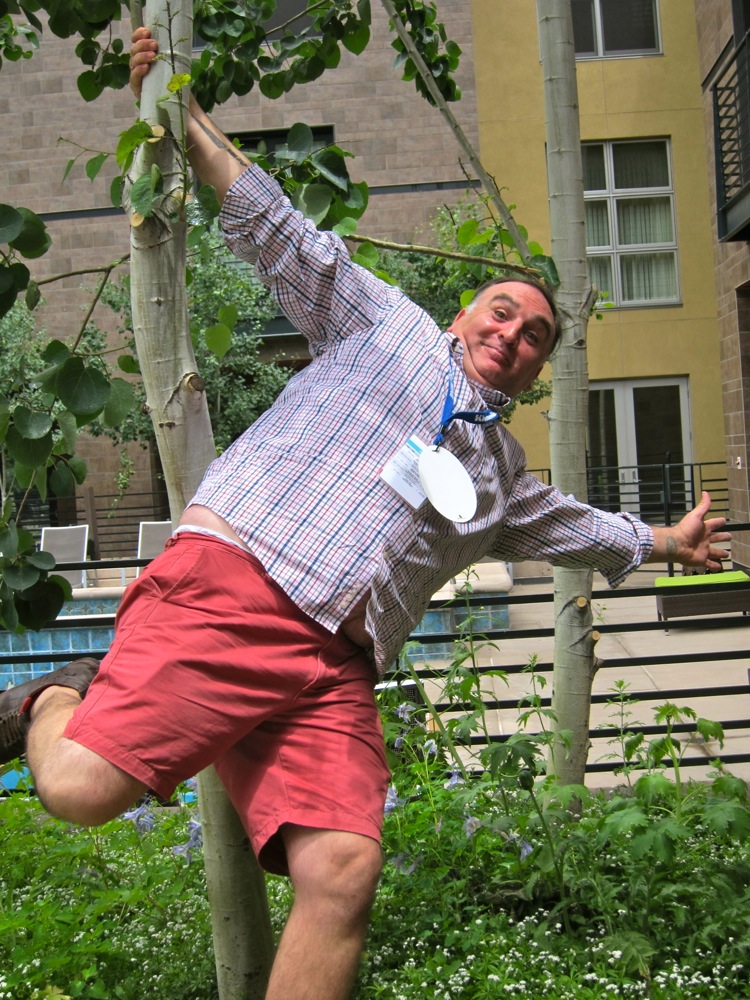 What are you up to in Aspen? Every year, I bring more and more people with me, I guess. [laughs] I don't know if that's a blessing or a curse. I bring more friends, more family members. I see my chef buddies, friends in the industry. This year, I've brought about thirty people! [laughter]

Wow! So business is good, then. Business is good. But it's always difficult times, with what's happening in Europe right now. I feel the pressure. I feel everyone has to do their part: opening places, creating jobs, helping people export, helping people import, helping architects build, helping interior designers to create. That's the side of the industry that we don't get enough credit for, the big family that we are in the restaurant industry in America. We are an important economic motor for America and the world.

I want to ask you specific questions about current projects you have. How's SLS Miami? It's the second SLS—first LA, now Miami—and it's kind of similar to the hotel in LA, but at the same time, completely different.

Did you adapt it to Miami? Yeah, well, the core of the hotel is already very beach-like, very Miami-like. I think Philippe Starck has done an amazing job. It's very personal—his daughter has paintings in the hotel, Philippe has put a lot of his personal time into designing the place. Again, I'm doing the entire food and beverage, so I'm not only the chef of The Bazaar but also the breakfast, and in-room dining, and the beach and swimming pool food. But The Bazaar is the heart. It pumps a lot of happiness into SLS Hotel. There's not many times that you see a hotel and a restaurant being part of each other at the same time. The most amazing thing is that as you come into the hotel the first thing you see is a kitchen, and a bar, and a bartender, and I love that about the hotel.

The menu at The Bazaar is kind of Spain-meets-Florida-meets-the-Carribean. And we're going to be having an homage to Singapore, because that's what we are: The Bazaar is the place where cultures meet. There's a lot of art deco in Singapore and a lot in Miami. I used that art deco connection to come up with five dishes, establishing a bridge with Singapore cuisine. You'll see shumai, and fishhead curry—it's going to be very unique.

The Bazaar is soft-opened right now? We are already taking reservations starting any time now, but we are controlling reservations. Again, I want everyone coming in and leaving with a good experience. You have to be very careful with restaurants at the beginning. But the team is amazing. I've never seen a better opening team in my entire career.

Moving up the East Coast, here's a question from Eater DC editor Amy McKeever. She says that America Eats Tavern is supposed to close in July. What's the plan, and what happens to Minibar when it closes? We close America Eats on the Fourth of July. So it was open Fourth [of last year] to Fourth [of this year]. I own the building, so Minibar is still going to be alive. Minibar is a very time-consuming place. The four, five, six members that I have working full-time on Minibar, we're going to be doing a lot of traveling, to Denmark, to Spain with me, to Marrakech, Morocco, and maybe Singapore. We'll begin taking reservations [for Minibar] in September, and we'll reopen in October. But it's not like we're closing. You can say it's the same style that Ferran [Adria] did at elBulli. For me, to be open every day of the week makes you a slave to the system.

Really? Why not? If you think about it, what America exports today, restaurant-wise, are restaurants like Nobu, which is great. But it's a Japanese restaurant. And then the American concepts are not concepts that America can be proud of, more often than not. For me to be able to have a restaurant that brings the American cheeses and American wines and spirits and the the traditional dishes that don't get the credit they deserve, to cities outside America, would be great.

America Eats, like a lot of other concepts I have, they are only dormant. I have them there, and I know sooner or later that I will bring them back to life.

Confirm or deny: you are opening in Brooklyn. Deny.

Confirm or deny: you are opening in New York. I'm? looking into it. [laughter]

Have you found a space? I'm looking into it. [laughter]

And Puerto Rico? We are opening in Puerto Rico, in December, at the Ritz Reserve, where I'll be doing a restaurant called Mi Casa. It's going to be Spain meets Puerto Rico. It's a very unique property; it's going to be one of the most luxurious properties in North America. It's only the second Ritz Reserve. In the beautiful town of Dorado. I'm going to be curating the golf course. Golf players, finally, they aren't going to play golf anymore. They're going to come to eat an amazing meal while they play golf.

Are you a golfer? Yes.

Who do you like in the US Open this weekend? Well, Tiger's doing great. The Spanish boys are doing terrible!

Finally, here's a question for you from Meadowood chef Christopher Kostow. He asks, "How do you reconcile all the molecular with the new trends towards naturalism and nature?" I don't think you have to reconcile anything. Roquefort is molecular. If I explain to you the process of how the penicillium, how it transforms the cheese, the proteins in the cheese—at the same time it's very natural. So? [laughing] Me, I laugh hard? Come on.

You give me boiled asparagus with hollandaise. But one day you can go deeper and say, man, do you see what really happens with the protein and egg yolk and the butter. So I can explain this from a scientific point, but at the end, it's hollandaise. So I don't understand this issue of molecular. I know the questions keep popping up, but they've been reconciled during thousands of years. We are the only ones making it complicated. Juan Mari Arzak—the three-star Michelin chef, the father of the Spanish nouvelle cuisine movement—he said one day, "There's only two kinds of cooking: the bad cooking, and the good cooking." [laughter]