Share All sharing options for: Drew Nieporent on Pricey Tasting Menus, Pete Wells, and Please Just Give Me a Freaking Vodka Rocks Already 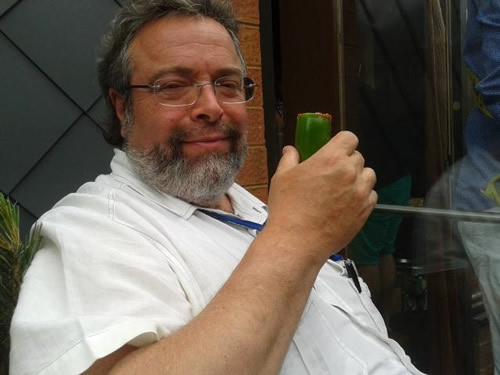 What's in the gossip mill right now? I don't know if it's the gossip mill, but I'd just love to go to a place and order a vodka on the rocks and not have it made with 19 ingredients. When you think about it, these people are promoting their liquor, whatever it is—Hendricks Gin, Patron. You'd think they'd want you to taste the actual thing. But every party I've been to, including last night, it's, "Can I just get a gin on the rocks?" And it's, "Oh no no no." And then the mixologists they've hired for the events, they look at you like, "What an asshole you are. Don't you want to try my fucking creations?" And by the way whatever happened to ice in a drink? We've all become like Europeans. [laughter]

In New York, what's going on? My whole thing is I just would like to get a drink that I want. You go to a place, and go, what is that, it looks like a piña colada, but not really. It's got coconut milk in it. And then you get it, and it tastes exactly like a piña colada. And they only make two at a time, and there's forty people waiting behind you at the bar.

Tribeca's been taken over by trendy cocktails. That's absolutely correct.

Are you going to try to fix that? I'm just going to do what I always do. [laughter]

So what are you doing here in Aspen? Did you see José Andrés yesterday at that seminar? He said very rarely does he do off-premise things because it's hard enough to produce things out of his own kitchen. But for me as a restaurateur, I think the challenge if you are doing a charity off-premise or an event like this, you have to work the logistics. And you're doing it with your chef, and then you see if your chef is really talented. It's like making a soup out of bones.

For me, when I was early in my own career, I could see the other chefs and how organized—or not—they were. That was always fascinating to me. I knew immediately, "I could never work with that guy." Even if they were making one fucking scallop, you could realize that they didn't figure the logistics. Our business is not always about food. It's also about speed. Someone comes in for dinner, they don't want to stay for more than two, two-and-a-half hours. We're always juggling speed and accuracy. We want what they order to be cooked to precision but it has to be done in a timely fashion. That's why I'm upset with the drinks. I'll probably innovate something where if I do a party, I'll have a bottle of every booze and a huge bucket of ice, because the bartender just slows you down.

What do you think of the [NYT restaurant critic] Pete Wells' tenure so far? I'm not so certain he's done anything where it's created a lot of buzz or controversy.

Is that good or bad? I like his individual reviews. I think he's been pretty accurate. But in that position, you are usually defined by the review that you give your best accolade to, or the one that you hose. Ruth Reichl, you always remember the Le Cirque one, "A Tale of Two Restaurants." [Sam] Sifton, I dunno. [laughter] Nah, he's cool.

Have you been to The NoMad? No, actually I haven't. I never run to the newest restaurants. And then they close. [laughter] Nah, that one won't close, I don't think. How is it? Is it good?

It's a pretty spectacular place. I finally got to Isa. And then they changed chefs like five days later. Isa's beautiful. I met Taavo [Somer]—I'd never met him. Gorgeous looking space. Brooklyn, a place like that, reminds me of Tribeca when we started 27 years ago. By the way, the comments you guys got on Eater today on the post about Isa's new menu, comparing Isa to Robertas—you have some clever people who are logging in to your site.

Anything new in Tribeca that you find worthy? Ah, the real estate in New York is just so high. There's been a little restaurant across the street from Centrico that's had like five tenants. In the middle of the night, they just ripped everything out. It was weird.

I give everyone so much credit for trying. But I think small spaces are very difficult, because if you hit a home run, you can only do your capacity. I think you need at least a hundred seats these days to do anything. In Tribeca, it's the stalwarts—Odeon, Tribeca Grill? no more Chanterelle. Fine dining is very tough. For Corton, the movie [about it] won a James Beard Award, it's coming out on DVD and it's going to premiere in London. But at the restaurant, Paul [Liebrant] is Paul. I don't think he fits in any category to be honest. Even Eleven Madison? there might be some restaurants outside of New York that look like Corton.

What do you think of this whole trend of very expensive tasting menus? Frankly, I'm shocked by it. You're looking at the guy, in 1985, who worked at La Grenouille, where the prix fixe was in the $70 range—back then! And when I opened Montrachet, I charged $16 dollars—one six—and David Bouley was the chef! So I've always been like Crazy Eddie [laughter]. I always thought it was my responsibility to pass the savings onto the customer. So if I'm in a low-rent area, I should not be charging a lot of money. But I think what happens is, and I think it happened with Thomas Keller, in Europe where prices were double what we were charging, it takes one person to set the bar high. So when Per Se did what they did, everyone can then come in just under that. I fight with Paul [Liebrant] all the time, because obviously our prices at Corton were raised quite high. But I find it extraordinary when a new restaurant opens that they're charging $150 out of the box. Where is the market for that?

Well, it seems to exist. Well, I don't know if it exists in vast numbers. I think what you have to worry about is, people come once, they experience it. And then? At the end of the day, if it's not worth $150, nature is going to play it out.

Have you been to Atera? No, I haven't, but I've heard very good things. Keep in mind, on those restaurants that charge that much money when they have a really limited capacity, they can really focus in on the diner, so maybe there's a justification of charging that much money.