Share All sharing options for: Bobby Flay on His New Show With Giada De Laurentiis & Reopening Bolo in NYC 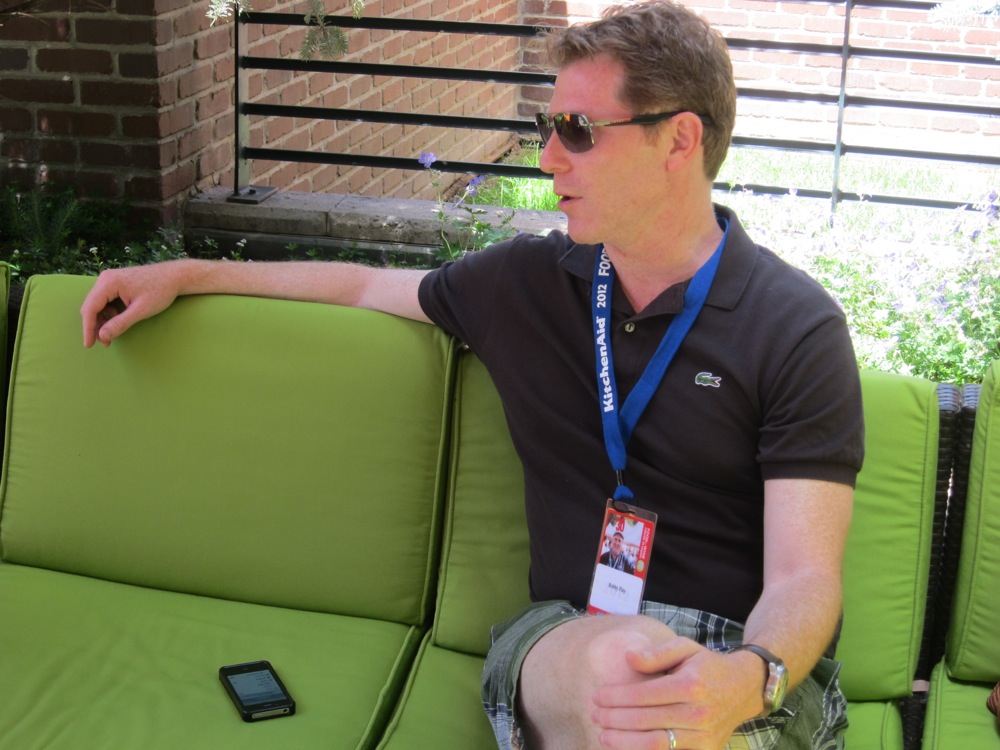 Eater: What are you up to in Aspen? I've done the festival 14 years in a row. And then I took two years off, and now I'm back. I'm happy to be back. I'm doing two demonstrations tomorrow. I'm doing one called "Parisian Flair, American Flavor," which is basically what Bar Americain is all about about. American ingredients, American sensibilities with french brasserie style to it. I'm doing a skate dish with a smoked chili butter, as opposed to skate with brown butter.

Then I'm going to do a version of Crepes Suzette, I'm going to use Bourbon, peaches, and some toasted pecans so it has some real American flavor. That's really the Bar Americain thing. Looks brasserie, tastes American.

That's ten Burger Palaces on top of six restaurants. How many employees is that in total? Sixteen hundred great employees.

Do you know all their names? I know about 1,590 names [laughter]. We're very hands-on. It's the thing that I want to do more than anyone else. People see me on TV all the time because I'm on TV and I'm on cable television so they can show it a lot. The thing that's most important to me is the restaurants.

I dropped out of high school and the first thing I did was get a job in the kitchen. I did the math — I was 17 years old then and I'm 47 now. When I started cooking, they started this festival. I wasn't invited that year. [laughter]

What was the first year you were invited? 16 years ago. Peter Prescott was the publisher [of Food & Wine magazine] then. Getting invited to Aspen as a chef to cook here is really one of the most prestigious things. It's such a well thought of event. I think it has the most prestige. Not to take anything away from South Beach, but that's a big show with so many people. This one's a little more laid back and I think it's more higher-end consumer driven. It's the king of the classics. When I was first invited, it was the pinnacle of my career. It was Julia Child, Wolfgang Puck? Bobby Flay. It's one of those things that I never take for granted.

Now, I've got some rumors for you to confirm or deny. Bring it on.

You're doing a daytime TV show with Giada [de Laurentiis]? The answer to that is yes, we signed a deal with CBS syndicators to take the show out. What that means is, it's very far from happening. What happens is, Giada and I have decided yes we'll do this, CBS says we'd like you to do it, and we've shot what they call a sales tape. Then they have to go out and sell it to affiliates, they need 80-85% of affiliates to sign off. If that then happens, they have to find real estate for it. Earliest it could happen when it would go on the air would be September '13.

Next one: Mesa Grill's moving? We are in the last year of our lease. We've been there 21 stellar years, as busy as ever. We're in our renegotiating year with our landlord. Our landlord, as is her prerogative, put the space on the market. Sometime next year is when lease runs out. One of two things will happen. My sense is that we'll renegotiate and stay where we are. But if not, we'll move somewhere else. We have our eyes open about moving Mesa Grill. It's not going away, that's for sure.

That's all I got for the Rumor Mill. I'll give you some more! Bolo [which closed December 31 2007]. People miss that place; it had three stars. I want to find a new space badly for Bolo in New York this year.

Here's why this is what I want to do. Other people have success in one [restaurant] concept and then they go on to next concept. More power to them. I want to do something that we've been doing our whole careers, again — but better. I wake up thinking about Southwestern and Mediterranean/Spanish food every morning of my whole life. There's no reason for me to go to Thailand and have a life-changing food experience and come back here and open a Thai restaurant. [laughter] I am going to Barcelona next week with my daughter. I'm going to come back raring to go for Bolo.

Quote: "The second Pop-Tart exists solely to hammer home the self-loathing initiated by the first Pop-Tart." He's good. I wonder who it is. It's probably somebody in the business, because they follow too closely. Now there's someone doing something about Michael Symon, too. And have we decided who @RuthBourdain is? I know you guys know. Didn't they say it was the critic from San Francisco?

Michael Bauer? I thought if anyone would know, you guys would know. [laughter] Where should I eat in Aspen?