Share All sharing options for: Dana Cowin on Her Most Embarrassing Moment at the Food & Wine Classic in Aspen 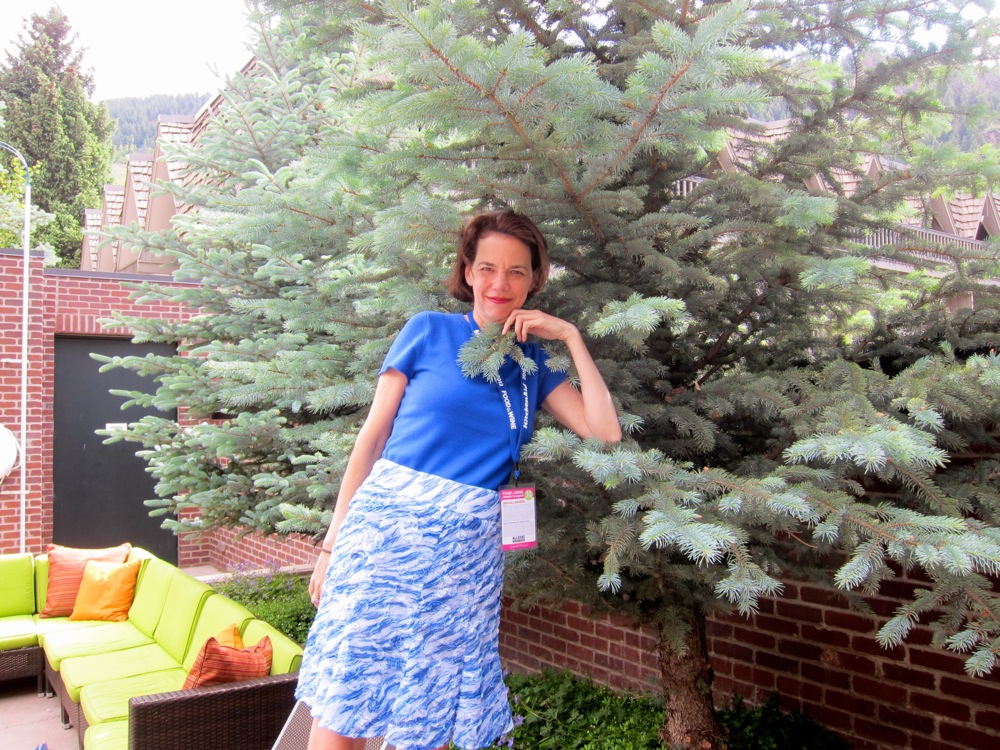 Let's talk about the Food & Wine Classic. Not the usual stuff. How about my most embarrassing moments?

Yes! I've had a couple of really embarrassing moments here in Aspen. When I got the job with Food & Wine, I didn't know that much about food. As editor-in-chief, I was the moderator of a panel of the most esteemed talent that was here. Julia Child, Marcella Hazan, Jacques Pepin, Patricia Wells. I had my questions prepared, I'd studied, I wanted to be sure I brought forth the F&W brand, which we were tweaking to make more about trends, among other things. So my fourth question, in an hour panel, I asked Julia Child, "What trends are you seeing?" She replied, "That is a media question, and I don't answer media questions."

I looked at my list of questions and realized they were all media questions. I was ten minutes in. I couldn't recover. It was in all my time at F&W, my most painful hour.

Did you wing it [on that panel] after that?I didn't go back to Julia Child very often. [laughter] Each of the people on that panel were sticklers in their own ways. They're all experts. They saw the young weak animal that I was [laughter], and, yeah, it wasn't so good.

We retired that panel. We decided that was not the best way to engage the biggest stars here.

How about a favorite moment from your time at the Classic? It's self-centered, I'm afraid. It was my ten year anniversary at the Classic, at the Publisher's Party at the top of the mountain. My mother was there, my husband was there. Suddenly there was this big flurry, people telling me, you need to stand here, you need to stand here. Sure, I said, I get it, the publisher is going to deliver some remarks.

Then I see Danny Meyer and Drew Nieporent pulling a giant three-tiered cardboard cake towards me. The lid pops open, and out come Boulud, Ripert? Mario, maybe? It was an awesome, awesome moment. So surprising. Only in Aspen would you have all these chefs in one place.

Any other festival moments you probably shouldn't tell us about? My time at the Classic is so controlled that it's pretty seamless. Sorry to disappoint.

Fair enough. How about this year's highlights? This year, we're opening the Chef's Club, and that is so cool. The Chef's Club is a collaboration between F&W Magazine and the St. Regis. The menu is created by four past Best New Chefs. That menu is used for six months, and then another group of four chefs is chosen, and they have a menu for six months. It's a completely new concept—when people in the past have taken a magazine and making a restaurant, it's usually just a licensing deal to use the publication's name. Here, it's much more. They want to showcase the point of view of young chefs cooking in America today. We have one from Birmingham, one from Denver, one from New York, one from New Orleans. You get a sense of how people are cooking around the country, but also a sense of their own personal styles. It's pretty big. It's quite ambitious. F&W Wine Editor Ray Isle and Jim Meehan from PDT are doing the cocktails. Now, it's up to the execution.

It's not a pop-up. Not at all. It'll last a year at the least. It's one way for a restaurant to achieve freshness at a hotel.

It's kind of a great idea. Who's was it? I believe it started with the St. Regis. I really admire them for being so passionate about this project! The chefs have put a lot of love on it, too. So many chefs today, they license their name. They ask, how much money are you going to pay me? That isn't this deal. It's their food, their recipes. It's really them.

You started by talking about how you were evolving the F&W brand when you started as editor-in-chief. How is that evolution continuing in 2012? [The brand] is really broad now. It has the magazine, books, events, book club, mobile, digital. We try to have one really strong point of view, which is celebrating new talent and the epicurean lifestyle. The thing that's really intriguing me now, and I'm tipping my hand before I reveal it in the magazine, is that I'm very interested in this notion of when someone is trying to figure out exactly what they want to cook, what are they looking for? Because we spend so much time looking forward, we've captured that life. But I want to add one component to that, which is, how are you going to live that life that we're describing to you? The way is by a series of recipes that we're going to give you that fit into the way you live rather than the way you aspire to live.

It's for print. It's a chunk! The components that will comprise that edition will be perfect for the web. And they'll become reoccurring features. There's nothing we do that we don't think 360 about in some way—can we build a book off of this?

The other thing that I'm really interested in that will debut next year? we created a year-long program. And we've never done that. We take the calendar and we're going to teach something every month.

You know how in the women's service magazines, it's how to get a better body in eight weeks. Or how to get a flat butt—wait, people don't want flat butts anymore. Flat stomachs! So we're developing a series of exercises to make you a better cook, and a better taster.

My originality is not focused on the restaurant world. I'd open a restaurant of the kind I like to eat. I am a moderately meatless individual and so I'd have a moderately meatless restaurant with an emphasis on amazing food from the farm, which is cliche, sorry, but I have this really deep interest in the new American palate. I would try to create a restaurant with that as the backbone. Backbone is fresh, local, a lot of vegetable green and fruit. We had fusion that was really sort of dreadful. But the next thing is the seamless integration of flavors from all different places. That's what I would like to do, because it would appeal to a new diner who would not find this strange because that's what they grew up with. It would lead the way to breaking down certain barriers without being trendy, pushy, or not tasty. And the service would be casual, welcoming, and kind. Of course!