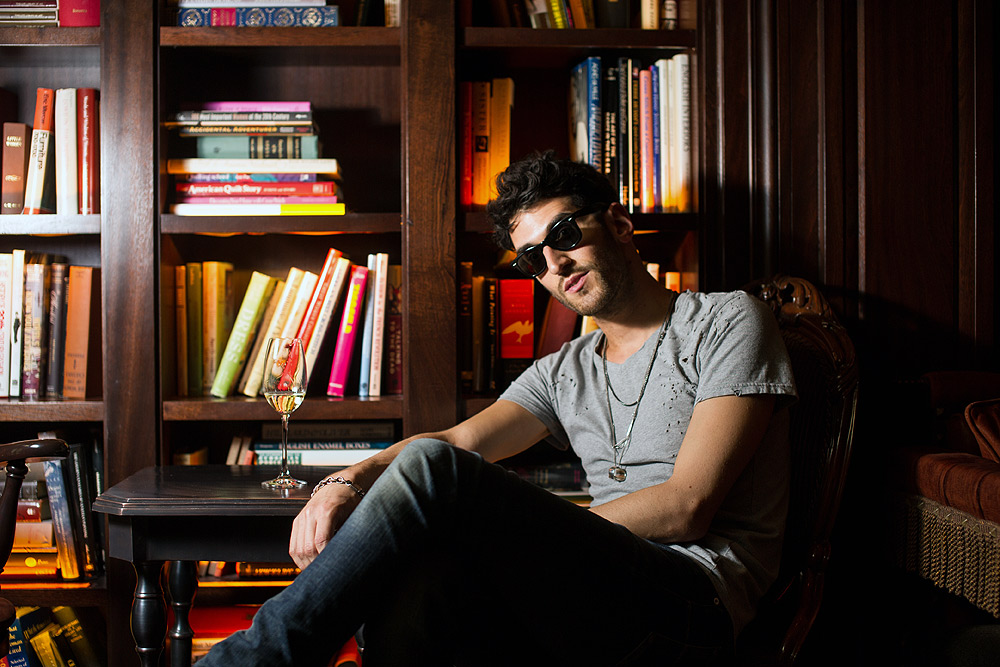 After about a year spent touring in support of their third album, "Business Casual," the band Chromeo finally has some time to breathe. And so, Dave Macklovitch, one half of the electro-funk duo that coyly and brilliantly melds everything from Jodeci to Hall & Oates to Chic, recently met up for an interview at the bar of the NoMad Restaurant in New York City. The sartorially mindful Macklovitch, who taught French at Columbia and goes by Dave 1 when he's onstage, approaches restaurants in much the same way he does music: you have to embrace both highbrow and lowbrow, and snobbery should never enter into the equation. Also, as far as he's concerned, nothing beats his mother's French-Moroccan cooking.

What did you eat growing up?
My mom is from Morocco, so she cooks French and Moroccan food. We'd do Moroccan food once or twice a week, and then the rest were just French staples.

Like what?
French cuisine itself is kind of a hybrid of run of the mill Italian dishes and French standards. My mom is the only person on earth who makes a terrific liver at home. I also remember having to do the dishes after the cioppino on Saturday nights, which was a pain in the ass.

What I prefer is when my mom cooks Moroccan food. There's a typical Jewish-Moroccan preparation that you have on Friday nights. It doesn't sound particularly good, but I'll describe it: spiced meatballs with peas and cooked celery. It's got the Moroccan spices. The other salient feature of Jewish-Moroccan cooking is the salad; there's always an assortment of like five on the table, like a carrot and cumin salad or salade cuite. For the latter, you have to put the peppers in the oven the whole day. I know that smell so well.

Do you miss it?
I would die for that right now. She has such an extraordinary repertoire. I grew up in a modest household, but there was a tremendous cultural wealth. When I moved to America and saw people get excited for a baguette and olive oil, I was surprised because I had grown up with that. I don't want to sound condescending about it, but it's just that those things were taken for granted and not necessarily synonymous with fancy. That European cooking is all about the ingredients. Mom would go to Jean Talon Market and then more ethnic neighborhoods for other ingredients. That's the key.

P-Thugg's mom is also a phenomenal cook. She is half Italian and half Lebanese, so she cooks Italian with strict orthodoxy. P can cook that food, as well.

Did you ever eat out?
We didn't really have the money. It didn't really start for me until I moved out, and even then, when I could try restaurants, I always found it better at home or at P's house.

Any memorable first experiences in restaurants?
I remember the first time I ate at a fine restaurant, when I was in college working as a hip-hop producer. I got my first check and took a girl out on a date to a restaurant my parents could never have afforded. It was like 80 bucks, and I was like, "Man, all right!" You can never take that stuff for granted. Now, we make it a point to try as many nicer restaurants — "nicer" doesn't always mean more expensive — when we're in New York or on tour. I keep a list of my favorites, city-by-city. But I always miss home cooking.

[The waitress comes by. Macklovitch says he's sticking to water, but then spots Vouvray on the menu. He goes with that.]

Vouvray is my dad's favorite. There was always a bottle of wine at every meal. My dad has a policy where he never goes over $17 for a bottle or something like that, which in Canada can get you a decent bottle. He never was a wine connoisseur and says that he just goes by how pretty the label is. But you know, when you do that every night for years and years, you start to learn quite a bit.

Do you know a lot about wine?
I know French wine well, but not so well the Italian stuff. What I did to learn was that when I came to New York to get my PhD at Columbia, I just kept a big book in the bathroom. After one semester, I kind of knew what I was talking about.

Back to restaurants: what are some of the favorites in New York?
I live in Williamsburg, where there is a high concentration of wonderful restaurants. My favorites are Marlow & Sons and Diner, which I go to at least once a week.

There are two other restaurants that opened recently, one of which is Isa. Isa is great, high-caliber stuff, man.

I recently interviewed James Murphy, who also singled Isa out.
I saw that. Personally, I think Freemans and Peels are cool, but Isa is on another level entirely. I tip my hat to that guy, because it was terrific.

The other is Reynard's, in the Wythe Hotel. I had a really good meal there.

There's an Argentinean restaurant on Driggs, El Almacen, that I go to on the rare occasion that I want to eat red meat. It's super slept-on and not hyped.

What about when you venture into the city?
When I venture into the city, I like a tiny, hidden Italian place called Aria that I stumbled upon with my mother one day. I hate Italian food that has too much butter, too much garlic, and too much tomato sauce and obfuscates the ingredient quality. But this place has a beautiful eggplant stuffed with goat cheese, a great lamb, an asparagus dish with poached egg. Everything is tapas size and great. Also Osteria Morini is excellent.

What don't you like?
What kills me is the square plate with the balsamic drizzle. Square plates are middle brow and terrible. I also hate bad fusion cooking and generally douchey scenes. Farm-to-table overhype annoys me. Sometimes, too many Wall Street types annoys me, as well. I don't like places with the neo-yuppie vibe. Marlow, for example, is a scene, in some ways, but it's a good scene. You'll have the young hipster couple taking out their Republican parents, who are visiting from Oklahoma. It's beautiful. I think Williamsburg has a great ratio of fine dining in an unpretentious setting. People think the hipsters in Williamsburg are annoying, but I don't. They make me laugh, and I think they're great.

Let's talk about the high-end places.
If you can allow yourself to do it, it's good to hit the midtown stunners, like Marea, Daniel, and Le Bernardin. The bells and whistles are cool sometimes. It's like getting your chops up. I don't really listen to jazz much, but once in a while, you want to see what people's chops can be. You want to hear some virtuosity. That's why you go to those restaurants.

What about restaurants abroad?
There's a place in the south of France that I'm taking my parents to next week. It's called L'Oustau de Baumanière. There's a cool story about this: my mom had always heard of this three-star restaurant, but when I went last year, it was two stars, so I looked into the history of the place. Turns out this restaurant was the jam in the 80s but then got downgraded at some point. Recently, they hired this Pakistani-French chef who learned to cook in France; his brother is a pastry chef. It's honestly the best food I've had in my life.

Any others?
I was in Brazil and we went to a great place in Rio called Meza Bar. In Paris, I like Le Séptime.

Bertrand Grébaut's place? That's fantastic.
Man, that's the best restaurant in Paris. I don't even like that post-industrial look with exposed lightbulbs, but the whole meal was outstanding, with organic wine. And I had never had a great experience with natural wine. Then, when I'm in London, I'll just hit up the funkiest spot on Brick Lane, and it doesn't really matter which. I like getting the Balti Chicken, since that's hard to find in the States.

Do you drink at all?
I never get drunk.

How come?
I don't really party, even though I am at them. P and I went out in Montreal when we were fifteen. By eighteen, we had gotten it out of our systems. It was time to focus. I don't like headaches. I can't remember the last time I got hammered. I do love good wine, though.

Any last words?
You have to keep it high and low. I had the best burger of my life at El Corral in Bogota, which was at a gas station. It's like the David Chang book, where in the preface he talks about eating Chinese takeout. That's my favorite food-related read ever. The high-low philosophy there is something else. Me and P, we can articulate a cogent discourse about fashion or politics or art, but we could just as easily talk to you about Rick James' leather pants. You can be discerning, but you can't be pretentious.

Video: "Don't Turn The Light On"

Video: "When The Night Falls"