No Reservations' Cook It Raw Episode: Just the One-Liners

Share All sharing options for: No Reservations' Cook It Raw Episode: Just the One-Liners

On last night's episode of No Reservations, Anthony Bourdain went to Japan for the international chef event Cook It Raw, which draws the likes of chefs René Redzepi, Sean Brock and David Chang. (And also some "vicious, abusive, misogynistic, back-biting piece of shit" food writer who never made it on screen.) There was foraging, fishing, hunting ducks with big nets and a whole bunch of world famous chefs tromping through the Japanese woods. Now, on to the Quotable Bourdain — feel free to leave your picks in the comments below. 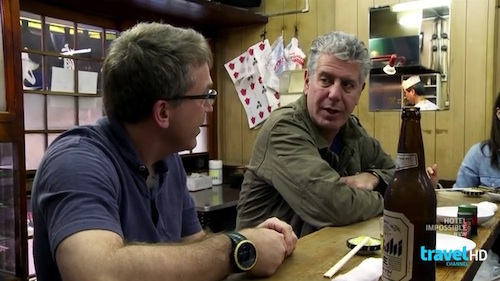 1) On the sounds of eel preparation: "The rhythmic whack of the nail through the head and the zip sound of steel through body."
2) On banned words: "I hate using the word 'unctuous'...If you're talking about a politician, you don't want him to be unctuous."
3) On René Redzepi Copenhagen restaurant Noma: "I don't want to embarrass you but the general consensus seems to be your restaurant is the best restaurant in the world." René Redzepi: "Well, obviously my mother thinks so."
4) On changing up restaurant menus: "Giving people what you know they're going to like, that's soul-destroying in a small way." 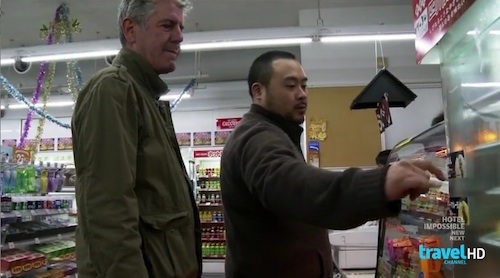 5) On his trip to Japanese drug store Lawson's with New York chef David Chang: "I started to have serious worries for Dave's sanity and health after watching him careen giddily around the shelves and counters of Lawson's, happily stuffing his bag with a cornucopia of apparent terror."
6) On Scandanavian chefs: "Fucking Scandanavians, man. They're ruling the world right now."
7) On cod sperm: Sean Brock: "I'm going to eat more sperm now." Bourdain: "That's a sentence you don't hear a lot in casual conversation." 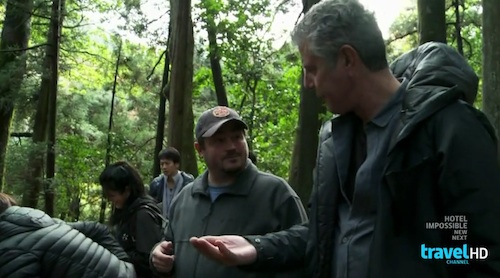 8) On the atmosphere at Cook It Raw: "Welcome to Camp Run-a-Muck."
9) Bourdain goes foraging with Rene Redzepi: "There should be a t-shirt: I Foraged With Rene Redzepi."
10) On the difference between fishing in Japan and fishing elsewhere: "It's totally silent. No unbung the bunghole and grease up the cabin boy and unscupper the scupper, whatever that nautical bullshit is."
11) On hiking through the woods with Sean Brock: "This is second nature to you, country boy... holy crap, I thought Madison Avenue was tough."
12) On hunting ducks using traditional nets: "Okay, I don't want to comes across as ignorant or anything but why don't we just shoot the motherfuckers?"
13) On easier ways to hunt ducks: "Can't we just use a car battery and electrify the pond?"
14) On the unsuccessful hunting trip: "The happy warriors have come up empty. For a second, there appeared to be some hope. Nets were launched masterfully into the air. But at the end of the day, we were disappointed. Looks like Sean will be foraging at the supermarket." 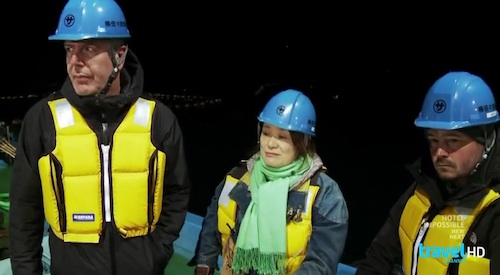 15) On chef Magnus Nilsson's dish: "A really smart guy just served me a plate with a rock on it and a bunch of mushrooms and twigs."
16) On Sean Brock's dish: "The Crown of Thorns... this is his Jungian-themed dish."
17) On dissecting the meal after it's over with his fellow journalists: "We're having this totally Top Chef moment here." 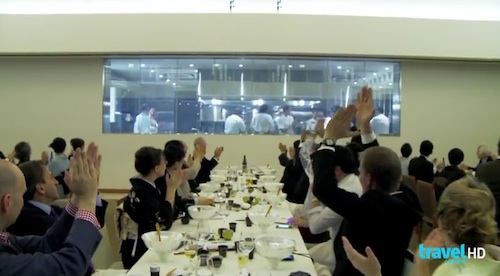