Is a Second Modernist Cuisine Cookbook in the Works?

Share All sharing options for: Is a Second Modernist Cuisine Cookbook in the Works? 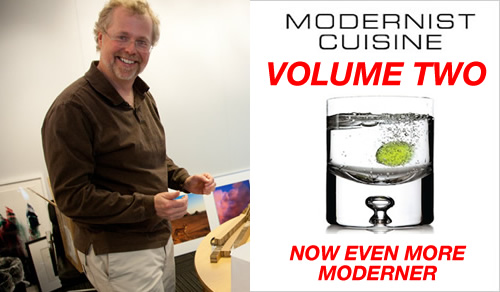 Is a second megacookbook from bajillionaire Nathan Myhrvold and his team of mad scientists in the works right now? A secret Eater mole from inside Modernist Cuisine's Kitchen Lab — whose name may or may not rhyme with "Mathan Nyhrvold" — tells Eater that they are currently working on book number two.

There are no details at this time and the official word from base camp is that they can "neither confirm nor deny." So: is this just a new and improved edition of the original book? An extra volume? A digital version? The long-rumored pastry book? Also, the original Modernist Cuisine took years to research and produce, so who knows when this thing will come out.

But either way: Myhrvold and company are not done yet. And why should they be? They've apparently sold a whole bunch of copies of the first book, and it just won two James Beard Awards, one of which was Cookbook of the Year. Round two, here we go.