Where Is the Cocktail Bar Movement Heading?

Share All sharing options for: Where Is the Cocktail Bar Movement Heading?

Welcome to Vintage America, a column in which Eater Wine Editor Talia Baiocchi takes a hyperfresh look at all things wine (and sometimes cocktail) -related. 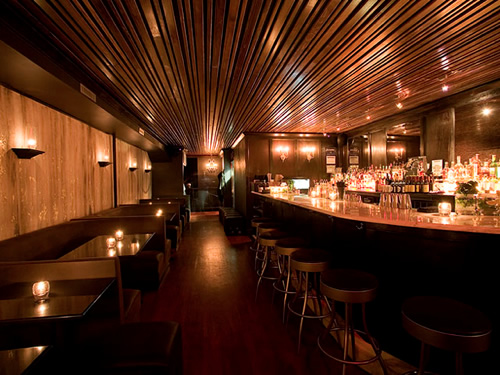 Some say the modern speakeasy boom started with PDT in New York City, which is ironic considering Jim Meehan and his partners never intended to open a speakeasy. The phone booth in Crif Dogs that acts as the entrance to PDT was about practicality: by avoiding a separate street entrance they could bypass having to acquire second liquor license. But Meehan reluctantly became the poster boy for speakeasies at a time when the modern cocktail movement was in transition from higher-end lounge cocktail bars, like Pegu Club in NYC and PX in Alexandria, Virginia to more dressed-down speakeasies like PDT or Death & Co. to the current scene, which is not only more diverse and down-to-earth, but also finding itself more integrated into the restaurant experience.

"When the economy tanks everything changes; what people want changes," says Meehan. "The lack of ostentation and discreetness that the speakeasy places offered became more appealing. For us it was a right place, right time."

But in just five years since PDT opened, the word "speakeasy" is already eliciting eye rolls. Trends move much faster in cocktails than they do in wine. Back in 2003 there were very few cocktail-specific bars in New York, let alone DC, Chicago, San Francisco, or Milwaukee. Then, as Meehan explains, the "Omakase-style" cocktail bar— which hinges on the bartender crafting something special for you based on your spirit preference — was leading the way, but those bars were very few and far between.

"People like Audrey Saunders at Pegu Club ignited the movement, but guys like Jim Meehan and places like PDT were really responsible for getting people excited about cocktails," says Evan Zimmerman, beverage director at The Woodsman Tavern in Portland, Oregon.

A Move Toward Populism

Zimmerman started his career in cocktails in 2005 when he joined Todd Thrasher at PX in Alexandria, Virginia. Thrasher had worked with José Andrés for awhile, so he brought what Zimmerman calls a "Ferran [Adrià]-leaning" ideology to cocktails. Thrasher was less about the classics and more about forward-thinking, esoteric cocktails. The glassware was top-notch and the place decidedly clubby. What bars like PDT, Flatiron Lounge, and Employees Only did was bring the rarefied "Omakase-style" cocktail experience to a larger audience, making it more populist, and less upscale.

Things started to explode around 2008, but it didn't take long for the boom to begin to worry guys like Zimmerman who began to see an increase young people "who were more interested in esoteric ingredients than they were in the guest experience." What began to fall to the wayside was the notion of hospitality. The boom, as many saw it, started to halt the democratization of the cocktail that was set in motion back in 2005.

"What started to happen was that people got a little too serious," says Zimmerman. "You'd go into a bar and order a vodka tonic or a sazerac and someone would roll their eyes at you."

But both Meehan and Zimmerman insist things are beginning to change and cocktail bars are reacting to the need, expressed by both consumers and bartenders, to bring things back down to earth a bit. Cocktails are also becoming more integrated into the dining experience.

"The 80s and 90s destroyed bartending as a career," says Zimmerman. "Then we saw the gold rush of cocktail bars and bartenders, and now it's plateauing in a good way."

Perhaps the "new" cocktail bar is less about décor or a specific concept but more about integration and service. Many of the best cocktail bars are attached to restaurants, like Bar Agricole and Heaven's Dog in San Francisco, The Woodsman Tavern and Pok Pok in Portland, and NoMad in NYC. You don't, as Zimmerman says, "have to wait until after dinner to go somewhere to get a good cocktail anymore." Both he and Meehan agree that we will continue to see cocktails rolled into the beverage experience of a restaurant in a more focused, meaningful way.

But Zimmerman's dream is that the rising tide will lift all boats. Not only does he wish for better drinks in restaurants, but he'd like be able to walk into more dive bars get not only a shot and a beer, but also a great negroni. Meehan's primary belief —or hope, rather— is that service will really drive the next iteration of the cocktail bar movement.

"Even though the fire has been lit with the trade, we're just starting and we still have to get consumers interested," says Meehan. "That means hospitality must be the next big thing."