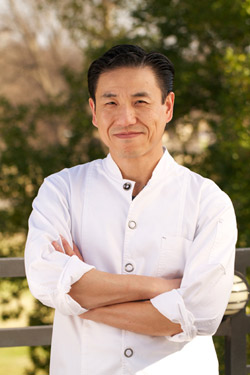 All that buzz a new restaurant builds leading up to its opening can certainly become imperiled when a yearlong buildout turns into more than four years of permitting and red tape. But somehow Acre in Memphis managed to keep the anticipation hot for its opening in early June of 2011. Chef/owner Wally Joe — who first earned his national acclaim in the 1990s as chef de cuisine at his family's restaurant KC's in Mississippi — reflects on Acre's first year, how it was received locally despite the drawn-out opening and why it's difficult these days to get recognition on the national level.

How did the concept for Acre come about?
Well, I guess really stemming from my last restaurant, which was called Wally Joe. I was getting ready to leave there and looking for another opportunity with a new partner. My current partner in Acre was a regular guest of ours at the restaurant. He really loved our food and we got to know each other. This is a very well-traveled man with very sophisticated tastes and a lover of food and wine. And he was interested in becoming my partner in this new venture. So we thought it was going to take a year to get this project up and running. And a year turned into four and a half. It was really a labor of love.

What caused the delay?
Well, we were very certain of the area that we wanted to be in and we looked at properties on this particular street. But it wasn't zoned for commercial restaurant use. So we had to go before the city and get our property rezoned for restaurant use. We had to go petition our neighbors to allow us to serve alcohol. We had to jump through a lot of hoops. It was a lot of red tape and a lot of legalities involved with the city — the zoning board and the alcohol commission and all that kind of stuff. It was a learning process and it was definitely a lot of patience involved.

And at the same time were you getting a lot of inquiries?
Absolutely. It was a very high-profile project. I've developed a pretty nice reputation locally, as well as regionally and nationally. So there was a lot of anticipation. People were always asking, "Well, when is the new restaurant opening?" Every time I would give 'em a date we had to push it back because there was always some kind of delay.

Was there any backlash?
Surprisingly very little. I guess inevitably there was the thought that, "Oh, you're not going to get a restaurant open. You're just making all this up. It's not going to happen." After a year or two, I guess it was sort of like The Boy Who Cried Wolf. Anyway, after we finally got open, it was a reality and it was good.

How did the opening go?
The opening went great. As I said, there was a lot of anticipation and just a big sigh of relief that it finally happened after all this time. So it made a big splash here locally. Of course, there's always a honeymoon period for new restaurants where everybody wants to go and you're going to be packed every night and there's always a wait and there's always a long list of people who are trying to get reservations. But after a year it's still like that for us. We're very lucky. But we're working very hard for our good luck, too, though.

And how did the menu-planning go?
Well, Andrew Adams, the executive chef here at Acre — I'm the chef/owner, chef/partner — has been with me for a long time. He started with me when he was 16 years old at my family's restaurant called KC's in Cleveland, Mississippi. He helped me open Wally Joe and has been with me ever since, 10 years now. So we always have discussions about food. Whenever we're at other people's restaurants, we always talk about the food. We always talk about our ideas for food. So it's an evolving thing with us as far as the menu-planning goes. He's very familiar with my style and I'm very familiar with what he's doing and we have a goal we want to achieve and we have an idea of what we want to serve: things in season. Things that people in Memphis like to eat. And, of course, our own inquisitive nature and our own ideas about experimenting. It's a lot of fun for us.

And how about the design of the building? I understand the renovation was quite intense.
It really was. What we did is we took an existing property, we completely gutted it to basically start from scratch. It might as well have been brand new construction. But Mary Stanley, who is the wife of my other partner Frank Stanley, is very much into interior design. We had many conversations about the look and the feel of the restaurant and we worked with another interior designer and a local architect about how we wanted the restaurant to feel and look. We wanted to keep the integrity of the existing property. We're set on an acre, hence the name. A lot of beautiful oak trees. A lot of lush landscaping here. So that's how we arrived at the look and the feel now.

And what changes have you made throughout this first year?
Naturally the menu changes quite a bit, but as far as everything else, not a whole lot. We're always tweaking things, we're always constantly trying to improve our product and the service that we give. Just the details really, just paying more attention to things. If something goes wrong we always try to learn from our mistakes and try to improve on how we do it and why we do it.

You have mentioned that you got a lot of attention locally and regionally but not as much nationally. I'm curious how that is for you breaking through to the national recognition.
I think nowadays it's a little harder. In the past, when I developed my reputation nationally, we were in the middle of nowhere in a small town called Cleveland, Mississippi. Two hours from Memphis, two hours from Jackson, Mississippi. So really it was a small town literally in the middle of nowhere. But we garnered great national accolades. CBS Sunday Morning did a whole segment on our restaurant and my family. The NBC Today Show noticed and I was invited to come up there to do a segment with them. Esquire magazine picked us as one of the best restaurants in the South. Just a whole list of things. But now I think it's because of all the 24-hour news cycle and all the publications and the internet and everything, it's harder to get more attention, even though people know me. I think it's just much harder these days.

And what's next for you?
To continually improve with this restaurant and to make it an institution. But I'll eventually want to branch out and do other projects as well. Maybe another restaurant. Another concept. Just other projects that might come along.