Share All sharing options for: L'Etoile's Tory Miller on Community & Inheriting a Legacy 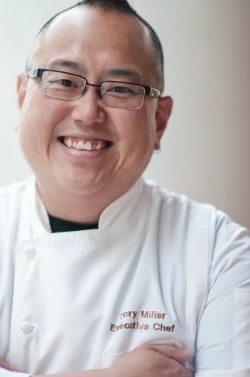 Chef Tory Miller of L'Etoile in Madison, Wisconsin beat out four other distinguished chefs to win the James Beard Award for Best Chef: Midwest at this year's ceremony. He was so surprised that he almost ran over Jacques Pepin on the way to the stage. It's understandable: in a culinary world that often seems to be dominated by the big names and the big cities, it ended up being the guy who abandoned all of that who got the prize. In the following interview, Miller talks about leaving the haute kitchens of New York and keeping the historic L'Etoile at the top of its game while putting his own touch on things.

I imagine things have been crazier than usual.
Oh yeah, but it was going to be kind of intense anyway because of the University of Madison graduation.

Let's start by briefly talking about the restaurant and its history, since you inherited a legacy, basically.
It was started in 1976 by Odessa Piper at a time when Chez Panisse was happening out in California. There was this push to the old school, European way of thinking about food that counteracted the mass production and all of that that dominated in the preceding decades.

At the same time that that was happening, the farmers market in Madison was starting up, and Odessa was a crucial part of that. It's grown since then to become the largest one in the country.

I came on the scene here in 2003, having never lived in Madison. I had trained in New York. When I moved here, I got a job at L'Etoile and became chef de cuisine. I equate it to a relay race, when the baton is handed off to someone with fresh energy and will continue on. That's what happened. My sister and I bought the restaurant and continued on the tradition that Odessa had started, while putting our mark on it, I guess.

You could have gotten a job anywhere, pretty much. Why go to Madison, Wisconsin?
Yeah. I really wanted to move away from New York because of my personal feelings [laughs].

What does that mean?
Well, I got tired of the theater of restaurants, in a way. I had this feeling that people cared more about where they were eating more than what they were eating — what was on their plate versus who was putting it on.

So you were turned off by the scene?
In some ways, yeah. It's the idea of saying, "I'm eating at Jean-Georges or Eleven Madison Park," and not caring necessarily about what you were eating. Where was it coming from? How did it get there? To me, what was important was that, and not what happened to it once it got in the building and who was preparing it. The celebrity chef thing is strange for me, since all chefs work very hard. I had this sense, taking the subway from my house to these richer neighborhoods to prepare food, that the people that were eating it sort of didn't care. That's what made me want to get out.

Did you quickly feel at home when you got to Madison?
Not really! When I first came here, it was a bit of a shock. Everything shuts down at 9 PM, and it's a much slower pace.

When did it get good?
The farmers market, when I got there, was just nearing the end of the outdoor season. So the following spring is when it really picked up for me. There are more than a hundred farms out there, and to go out there and communicate with these people and hear about their operations and learn about who they are and what they do is great. You feel a deep connection. And I found that we were mutually supportive. I started feeling a great sense of pride that I wasn't only giving these people a tasty meal but also contributing to a community.

You mentioned before that you and your sister have put your mark on the restaurant. How do you see that?
In the first years, we started cultivating relationships with farmers and continuing to show these people that we were there for them. We needed to prove that we were going to keep on doing what Odessa did. After a couple of years, we took on another business partner, who strengthened our company and helped us grow the business. She made us think of moving the location, which we did, and a whole bunch of other important things.

When the opportunity to move the restaurant came about, it was an intense process. There were a lot of people that were skeptical, that thought we'd ruin all of this history. It was scary, to say the least, but I think it's worked and that people are excited about it.

Now, to the most difficult part: talking about the food you make.
Yeah, it's tough, because I just go in and make it. That's I think how most chefs are. Dishes aren't done until they're done in our minds. Maybe that's why chefs talk so much about their food, because it's so hard to describe but they want people to know where it comes from.

But for me, beyond farm-to-table I would say — this is going to sound so dicky — that I do globally-inspired regional food.

Can you try to dissect that?
I know where I am, I guess. I know what people like to eat in Wisconsin, whether that's rich food or something else. Here's a way to describe it: I have four main cuisines that inspire me. One is the French background and technique, which most chefs have, especially those that have gone to culinary school. That is still relevant and important. I also love Italian food, because I am inspired by the freshness of the produce around us, which lends itself to that simplistic elevation of those ingredients. Then I have my own personal tastes — I love everything Asian. I draw from Vietnam, Korea, Japan, and China a lot. I blend them all together and then bring in the fourth element, which is midwestern or Wisconsin cuisine.

Like I'll use sesame, kimchi, and soy in one dish that might shock a person from Vietnam.

What's an example?
I have a rice bowl on my lunch menu, and my friend from Korea said, "This sounds great, but I can't believe you put peanuts on it!" But it tastes really good. It's a rice bowl, which is inspired by Korea, but I'm using sushi rice and I'm using Vietnamese vinaigrette and then I have hoisin-glazed pork, kimchi, and then peanuts.

You touched on it before when we were talking about New York, but I wanted to bring up the idea of the ambitious chef that isn't in Chicago or New York or San Francisco.
Yeah. I have ambition and all of these things that drive chefs, but to me, what is really important is having that sense of community with other chefs, farmers, customers. It doesn't mean you can't find that in a big city, but this is just the right fit for me.

Any last words?
It's just been such a crazy ride, and I still can't believe that they called my name at the Beards. I'm getting a lot of letters from chefs across the country. I'm also getting beautiful notes from locals, but at one point, stacked three in a row, were letters from John Besh, Daniel Boulud, and Thomas Keller. How is this happening to me right now? I know they send those out every year, but to be the one getting it is a big deal.