Share All sharing options for: Spike Mendelsohn Shilling For Pharmaceuticals Now, Too 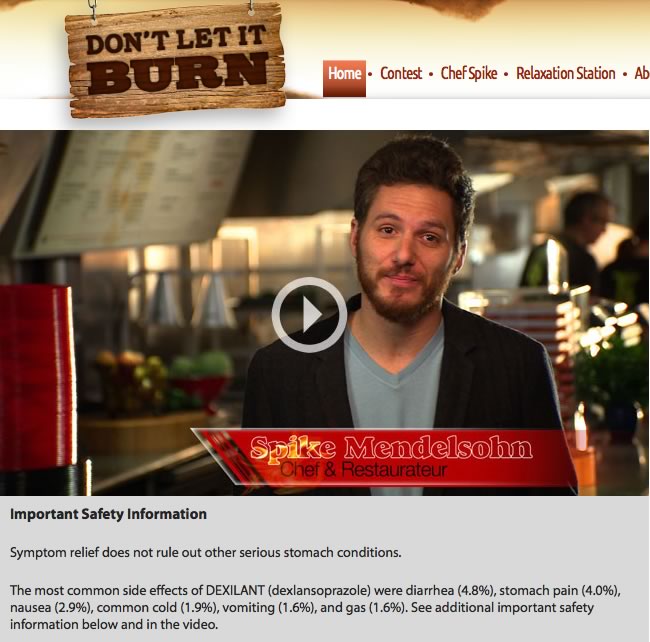 Cheftestapant/pizzeria/burger joint owner Spike Mendelsohn announced to the world today that he suffers from acid reflux disease and that he's endorsing a heartburn drug from Takeda Pharmaceuticals U.S.A., Inc., one of the top pharmaceutical companies in the world. In a move super-reminiscent of grease queen Paula Deen's diabetes announcement/big pharma sponsorship, Spike is just the next in line to be a Big Pharma Sellout Chef.

Spike is going to pimp a drug called Dexilant, and part of the deal is offering "kitchen tips," recipes, and shit-eating grins on the website Don't Let it Burn. The press release will probably give you heartburn, as well:

Chef Spike Mendelsohn is known for his fun and inventive recipes, but a lesser known fact is that he also suffers from acid reflux disease (ARD), also known as gastroesophageal reflux disease or GERD...

"Food is not only one of my passions, it's my life and as a chef, I know all about long days and nights. And, for me, certain foods and stress can aggravate my symptoms," Chef Spike shared. "But as the saying goes, if I can't take the heat, I should get out of the kitchen. So I've worked with my doctor to come up with a treatment plan that, for me, includes taking DEXILANT, which helps me to manage my acid reflux disease."

There's a contest where someone can win the prize of Spike cooking in their kitchen. Also: free music downloads. Tom Jones and Duran Duran anyone? Here's one of the ridiculous videos with Spike, preserved for posterity: