Welcome back to Sound Bites, an Eater original video feature in which footage of the city's most badass chefs crafting their signature dishes is paired with tunes from up-and-coming musicians. Regarding the volume: turn it up. 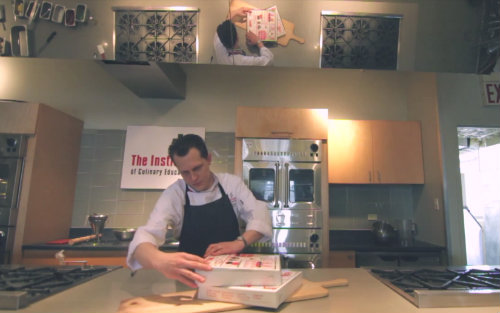 Pastry titan Michael Laiskonis is no stranger to Eater videos, having been the subject of the first to ever appear on one of the sites. And today, for Pizza Week, he resurfaces in the kitchens of the Institute of Culinary Education, his new home after having stepped away from his dessert nook at Le Bernardin.

What he's making this time, to the tunes of the excellent Chrome Canyon: a dessert pizza that eschews gooey gimmicks and instead focuses on adapting the essentials, namely crust, tomato, and basil. Also: there are cream cheese spheres. But best to let Michael show and then explain:

I don't know that I've ever found anything billed as a "dessert pizza" all that appealing — the notable exception would have to be Brooks Headley's genius eggplant crostada, but I don't think he's ever really played up that association anyway. Perhaps my issue with a typical sweet approach is in the initial concept: rather than attempt to replicate familiar textural cues with warm, gooey components far removed from any traditional notion of pizza, I decided to push the idea toward a fresher, ingredient-driven direction.

What would happen if we took the pizza in its simplest form — say, the margherita — and reduced it to its essence? Crust, tomato, cheese, and basil. What could I then apply, with some measure of poetic license, to inspire a highly refined dessert that might also stand on its own, without the wink and nod?

I chose a classic pâte sucrée over puff pastry, or a yeasted dough, to create more of a thin, textural contrast with the topping. And apart from any homage paid to Alain Passard's iconic tomato dessert at l'Arpège, I can't help but reference a dessert of gently candied tomatoes I saw Johnny Iuzzini do almost a decade ago; I'm adding touch of stewed raspberry to balance. Dairy arrives in the form of barley sweetened, liquid-center cream cheese spheres, and basil is expressed as a dense almond-based pain de Gênes and caviar-like beads of hydrated basil seeds. At the risk of overdoing things, I add a final flourish with grated Sicilian pistachio, lemon zest, Maldon salt and virgin plum oil.

Have I done justice to any strict purist's notion of a pizza? Probably not. But the exercise resulted in the creation of a new dish, and that's kind of cool.