Share All sharing options for: No Reservation's Lisbon Episode: Just the One-Liners

Anthony Bourdain found himself in Lisbon on last night's episode of No Reservations, where tons and tons of seafood was consumed, cherry liqueur was drunk by the shotful, and Bourdain developed a love for canned fish. Also, there were several "sandwiches slash booze mops." Now, on to the Quotable Bourdain — feel free to add your picks in the comments. 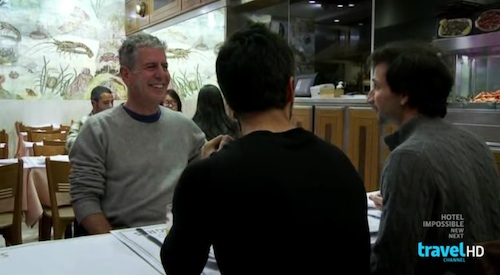 1) On shrimp brains: "Basically, if you don't like what's in a shrimp's head, I can't be your friend."
2) On a steak sandwich served with yellow mustard: "There are certain American dishes for which you want the nasty mustard."
3) On prego: "For dessert — and you gotta have dessert right — prego, a steak sandwich slash booze mop that puts you right over the edge in a protein overdose." 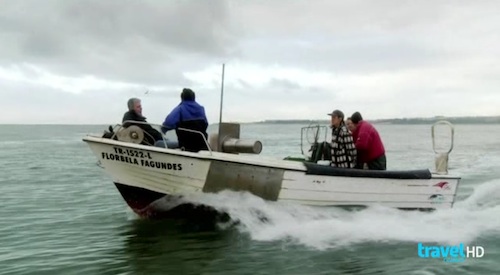 4) On octopus: "Sharp knife to the brain and then faster than a high concept travel show that didn't have enough first week numbers, our catch is given a swift and merciful end."
5) On the bar he's going to: "The crummy part of town, a strip populated by cruiserweight hookers with bad dentistry."
6) On what he's into these days: "I have recently acquired a true and deep love for really good stuff — eels, sardines — that come in cans. Really." 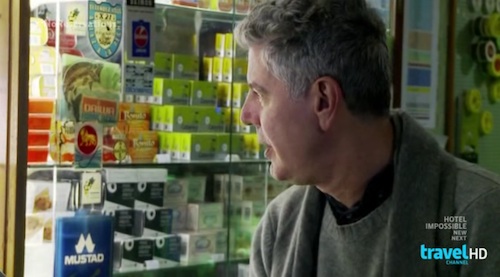 7) On hipsters: "Do you have hipsters here? Do you have these people walking around with fucking socks on their heads? Like Brad Pitt. They look like Smurfs. They've got a fucking sock on their heads. We've really gotta stop that shit. Sockheads. I hate them."
8) On drinking cherry liqueur first thing in the morning: "Cancel the meal scene. I'm going down."
9) On not canceling the meal scene: "Now pleasantly drunk and stupid enough to consider that endorsement to consider that endorsement deal from Antabuse, I stumble the street only dimly aware that I've got a big lunch ahead of me."
10) On the game of chinquilho: "Horseshoes and hand grenades, together, sort of, in one game."
11) On playing the game: "Into the chinquilho court. Like Thunderdome, only not really." 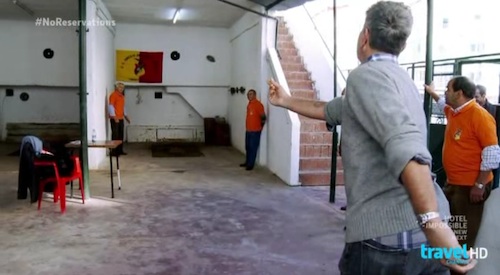 12) On people's reactions to horse meat: "The horse thing, people start to be like 'oh, the poor horsey.'"
13) On whether laughing at pain is universal: "Yeah, I don't think the French and Italians do that so much. It's mostly pussy jokes. I mean, that's funny everywhere. It's worked for me seven years."
14) On bifana pork sandwiches: "Yes, give me your hot porky love." 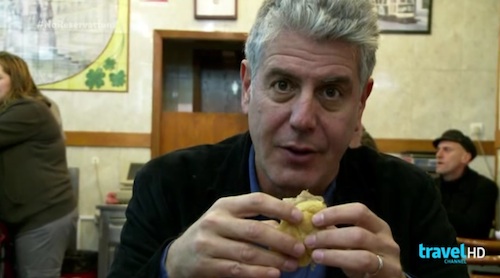