Share All sharing options for: The Hemisphere Club / Tower Suite on Mad Men

Editor markup for Mad Men - The Hemisphere Club/Tower Suite. This is only visible in the story editor.

The Hemisphere Club/Tower Suite was opened by Joe Baum of Restaurant Associates in late 1960 on the 48th floor of the Time-Life Building in Rockefeller Center. RA was also responsible for The Four Seasons, La Fonda Del Sol, the Rainbow Room, and The Forum of the Twelve Caesars (which was previously featured on Mad Men). By day it was The Hemisphere Club, an exclusive lunch club for executives. According to Life magazine, in 1961 The Hemisphere Club charged a thousand dollar initiation fee and then $360 a year in dues, in addition to food and drink. The Saturday Review wrote in 1964 that it was the "first executive lunch club to acknowledge women as executives."

By night it was the Tower Suite serving multi-course dinners for $8.50. Said the Heinz executive in Mad Men, "You know, I've always wanted to eat here. I thought it was just for Time-Life employees." The stated theme of the restaurant was to provide "elegant dining in a homelike atmosphere, complete with butlers and maids." According to Gael Greene, each table was "tended by a butler, maid, and footman." Life described the meal: "In fact, it has no menu at all. Diners pick one main course from a rolling cart that features three different selections each evening — perhaps a choice of filet of beef, pheasant or roast lamb."

Editor markup for Mad Men - The Hemisphere Club/Tower Suite LOC. This is only visible in the story editor.

In the late 1950s/early 1960s there was a big trend of exclusive lunch clubs perched high above the city. See the August 1960 New York Times piece, "Lavish New Club Marks a Trend," talking about the hot trend of "exclusive," "expensive," and "elaborate" lunch clubs. Quote: ";One thing all of these clubs have in common, of course, is their altitude — a factor that seems to fulfill some inner need of the executive ego." They reflected "the growing role of a new ritual in United States industry — that of the business lunch." In 2005, Charles McGrath explained it thusly: "It used to be a rule in New York that the higher up you were in the world, the higher up in the sky you ate your lunch."

New York Times restaurant critic Craig Claiborne reviewed the Tower Suite in January 1961, calling it "for the most part, excellent." The novelty of an intermezzo of "fresh cranberry sherbet" was still new, and Claiborne swooned, calling it "a most welcome interlude for a several-course dinner." Wrote Claiborne of the "many matchless views of the city": "Although New York viewed from a great height is one of the visually exciting places on earth, there are astonishingly few restaurants that take advantage of the fact."

An October 1964 issue of the New Yorker noted that "seven evenings a week and at Sunday brunch, a butler in a black tailcoat and a maid in a fluffy white apron and a soft green dress dance attendance on each and every eight-seventy-five prix-fixe table."

Things went downhill, however. Gael Greene, in New York Magazine in 1970, with the headline "Doom at the Top," wrote, "The Tower Suite in the baneful cumulus atop Time Inc. is dinner in your rich uncle's penthouse minus old Uncle’s snores, belches and boring reminiscences." Dinner in 1970 was $11.50. Sunday brunch, priced at $7.50, was "still grandly baroque, and bounteous enough to paralyze a Victorian trencherman." Greene concluded: "the Tower Suite is still ideal for enchanting sheltered in-laws, teenagers, the hopelessly in love and out-of-town clients from Saginaw."

Prices increased considerably over the years, with a 1991 New York magazine citing prices of $70 to $130 per person. The closing date is unclear. 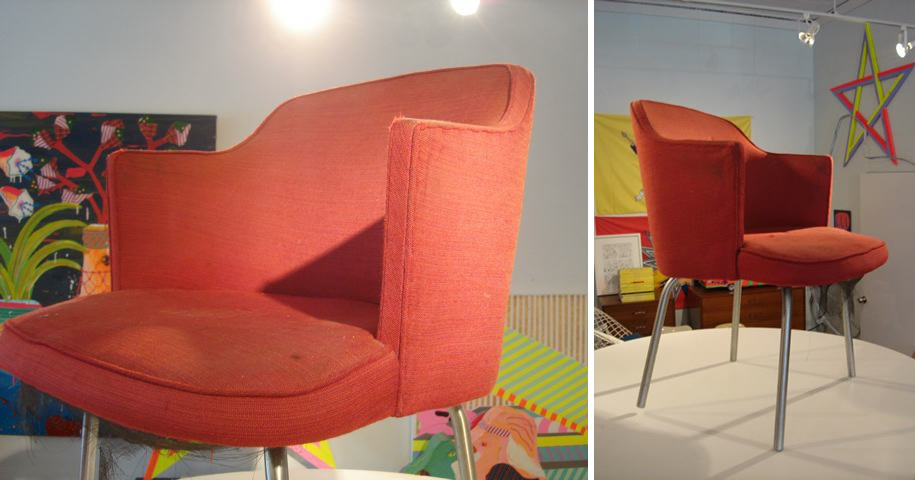 Also of note is the "Hemisphere Club Chair." Designed by George Nelson exclusively for The Hemisphere Club/Tower Suite for the Herman Miller furniture company (they also did the restaurant's interior). According to Bright Lyons, "the chairs were never put in to production."

Above is the logo for The Hemisphere Club, also designed by George Nelson. Source: American Trademark Designs: A Survey With 732 Marks, Logos, and Corporate