The Era of the Sommelier as Delphic Oracle Is Over

Share All sharing options for: The Era of the Sommelier as Delphic Oracle Is Over 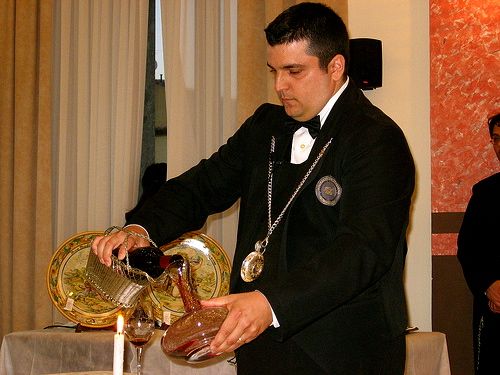 "People are no longer looking for the best wine, they're looking for the most distinctive wine," says Levi Dalton, sommelier at Boulud Sud in New York City. While that may just sound like semantics, it's actually the single most significant development in the diner-sommelier relationship over the past 20 years.

In the 1990s when someone came to a restaurant and said, "give me something good" you'd know they meant: big fruit, soft tannins, and less than 1,000 cases produced. If what you brought back wasn't cult California cabernet, it better be something with the same degree of rarity.

Dalton remembers pouring Marquis Phillips Shiraz by the glass at a restaurant that focused on Campanian cuisine and thinking nothing of it. No one really cared whether shiraz and scallops went well together, or whether that Shiraz was grown in a cool site or a warm site. Context and cohesion came much later. All that mattered was that he received all of the 15-case allocation of the wine for his state and that the wine tasted like California cab for a fraction of the price.

Raj Parr, the wine director for the Michael Mina group and the co-author—along with Jordan Mackay—of Secrets of the Sommeliers said that in 1996, when he first started as a sommelier it wasn't about anything but what the guest wanted. Now, he says, the sommelier is less of a steward and more of an ambassador. Sommeliers are no longer just there to give the diner what they are familiar with; they're there to expose them to something they probably wouldn't have discovered on their own.

The new diner is also more open in response. Parr says one big change in rhetoric is that people are not asking for specific grapes like cabernet and malbec as much. They're asking for characteristics like bright and minerally, or for a wine that's simply "balanced."

Minerality is now a word that diners use with greater frequency. It means different things to different people, but its usage is the diner's way of communicating that they are open to a wine that has flavors and textures at odds with big fruit and soft tannins.

Pinpointing the origin of this change is difficult because the influencers—the sommeliers and writers—have also changed. And the changes all parallel each other in interesting ways.

The Era Is Over

The era of the authoritative, slightly aloof, sommelier is over. It's no longer about simply delivering facts based on extensive tasting experience or guiding a diner to choose one vintage over another with few words exchanged.

"The sommelier as Delphic oracle is wildly out of fashion now," Says Dalton. "You're no longer there to deliver verdicts from Mt. Olympus."

The sorts of wines that you now find in restaurants—everything from Savoie and Jura to the Canary Islands—are not wines fit for verdicts; they are wines that require explanation. Thus, in response, the role of the sommelier has adjusted to be less about absolutes and more about anecdotes.

It's no wonder then that sommeliers who are getting the most attention now are those, as Dalton points out, who are "inspiring excitement" by giving the wines on their list context. But it's hard to tell whether the consumer has been influenced by this change or if the sommelier has has been inspired by the consumer.

The same exact change is also apparent in the way journalists and bloggers communicate about wine. The score and tasting note delivered as an absolute, without context, is less fashionable than telling a wine's story. And those stories are now being delivered in a variety of new ways—from the literary approach of Alice Feiring to the wine comics of Hawk Wakawaka.

Not only has the consumer changed, the rest of the wine world has changed with them. We have all found new wines to talk about and new ways to talk about them.

Dalton very eloquently sums these changes up in three words: