Share All sharing options for: No Reservations' Mozambique Show: Just the One-Liners

Season eight of No Reservations premiered last night, and host Anthony Bourdain found himself in Mozambique where he says the food "is the best I've had in Africa." While he was there, he sampled the famous piri piri chicken, was served a crayfish the size of a small child, and ate some curry deemed worth "some extra time on the thunder bucket." Now, on to the Quotable Bourdain — feel free to add your picks in the comments below.

1) On accidental vegetarianism: "What promoters of vegetarianism maybe don't realize is that much of the world already is living a vegetarian lifestyle, and they ain't too fucking happy about it." 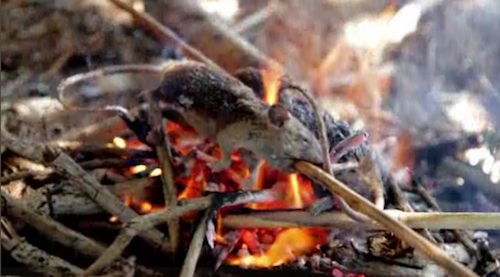 2) On what villagers eat: "Major source of protein around here day-to-day? Rat."
3) On niceties: "Everybody is being way too polite waiting for me to eat."
4) On Mozambican curry: "Food like this I'd cheerfully shit like a mink for two days for. This is worth some extra time on the thunder bucket." 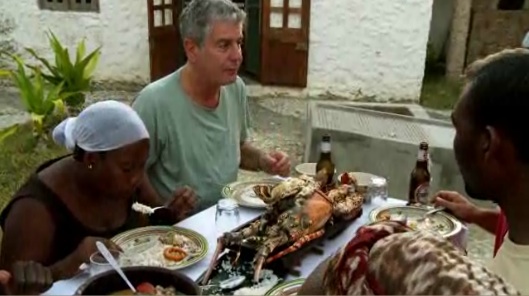 5) On the giant crayfish served on Mozambique's coast: "I think we need another table."
6) On piri piri chicken: "It makes it easier to imagine the vacation wonderland — for white people, anyway — that Beira once was."
7) On what he'd rather be doing: "If I was not beholden to the bitch-goddess television, I probably would have spent my morning lying on that beach, guzzling the local beer, have a nice piece of chicken, enjoy this moment of zen."
8) On Mozambican controlled substances: "You notice whenever they put the piri piri sauce on the table, they dole that shit out like it's pure cocaine. There's never more than a tiny little bit in there. They don't trust you with a lot of it." 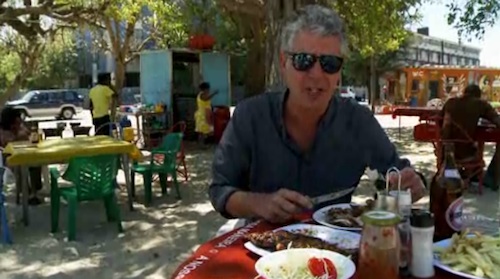 9) On eating piri piri chicken wings: "You don't want to hold onto this spicy chicken and then go take a leak later. That would hurt."
10) On needing a napkin: "I'm just a greasy mess here. I guess I could wipe my hands on my french fries."
11) On colonialmism: "Ah, Portuguese bread. I tip of the hat to the old country and their former oppressors. It's funny what the occupiers leave behind."
12) On what the FRELIMO party did to Mozambique when they were in power in the 70s: "Basically doing what young, idealistic, communistically-inspired countries always do: fucking things up really badly." 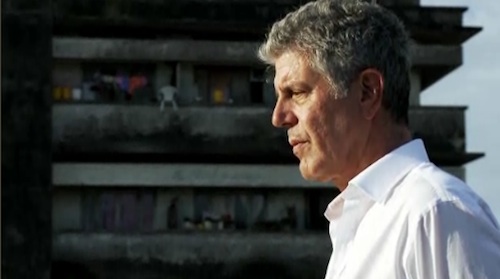 13) On the former Grande Hotel in Beira: "There's not a single toilet in that entire structure or electric power and 2,700 people live in it. That's enough, call it a day. Nothing more to say."
14) On the food in Mozambique: "The food here is the best I've had in Africa."