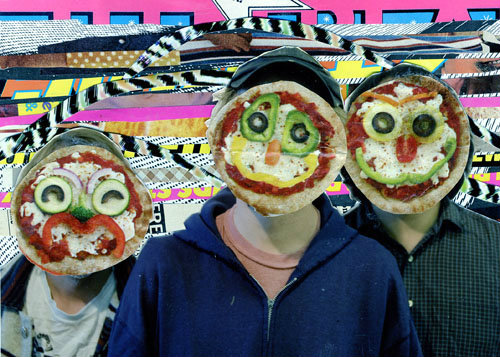 When Pitchfork declared Black Dice's "Pigs" as some of the best new music out there, they wrote, "The comfort in knowing Black Dice are still out there pulverizing the crap out of their instruments is matched by the discomfort their music can generate." The underground electronic trio has influenced a ton of bands, including Animal Collective, Real Estate, and Liars, and their forthcoming album Mr. Impossible (out April 10th) will only add to a legacy of kicking ass and doing it their way. In the following interview, band member Aaron Warren talks about his eating habits, which range from New York pizza fixations to fried seafood meals in South Carolina to unexpected feasts in San Sebastian, Spain.

What places do you like in New York, where you are based?
Now that I have a kid and a family, I'm not eating out as much, but I'm really into a few great pizza places. I love Tony's on Graham Avenue, which does an excellent Sicilian. And there's also Best Pizza in Williamsburg, which is a little fancier or hip.

Can you describe why you like them so much?
Well, Tony's was really the first place I went to in New York when I moved to the city and was crashing with the other members of the band. It was in a warehouse just under the BQE. So Tony's was basically what sustained me for months and months, with that great focaccia bread and thick crust. I'd just go with the straight up cheese pie.

As for Best, it's a little more new school and gourmet. They have a great slice with beets and all sorts of vegetables, which is wonderful every time. It's not an O.G. type place — it's young and new and all that stuff. I guess it's fancier.

Any other spots in New York that you like that don't do pizza?
The place Matamoros — I haven't been back there in a while but I really, really miss it. It's a tiny Mexican bodega, family-run, that had great tacos and burritos served in the back. It's reasonably priced stuff, and you'd sit at a table under a fluorescent light. Pretty damn cool.

Is it a hipster spot, an authentic spot, or a bit of both?
For the most part, it was hipster kids, but there were some Mexican customers. What are you gonna do about that? Everyone was psyched to be there. Even though the rent was going up, they were packed all the time.

What about places you've hit on the road or in your travels?
Some of the greatest meals I've are in Portugal. It's not worth mentioning names, since we didn't really research where we would go, but had wonderful experiences everywhere, basically.

We've played there maybe three or four times, and I've always really liked it. First, it's really inexpensive. You can go to any of these family-style restaurants and get a whole fish that's beautiful. Maybe some potatoes and rice. That whole deal — fresh and nicely prepared — will be less than 10 Euro. I went there with my wife for our honeymoon, and one of the most memorable meals was when we dropped into a random place on the ocean and just ate some great Dorado and rice.

The best meal I think we ever had on tour wasn't really at a restaurant, actually. We were in San Sebastian, in the Basque region of Spain, and we had to go to a rec center. All the street signs are crazy and hard to understand and the roads are really small, and at that time we didn't have GPS. We were freaking out and saying we were fucking lost, on the coast, in the middle of nowhere. But we realized that the venue was at this soccer bar facing the ocean. Inside the place, there were a bunch of salty locals watching the game, drinking beers, and singing songs. We were like, "What the hell are we doing in here?"

Basically, that soccer phase of the night ended, and the same space turned into a restaurant for us. They prepared an incredible seafood meal that had some crazy expensive small eels. It was delicious.

Oh, man. Angulas?
Yeah! It was a really fancy meal, somehow, with tons of expensive wine. Just madness. We basically had the whole place to ourselves for hours and hours. Then, at midnight, that phase ended, they took out all of the tables, and they set it up for our show. Pretty soon, all these kids started showing up and it became a rave, basically. It was killer.

Any places you like in the U.S.?
I like places in South Carolina, where I go at least twice a year. There's a place called The Wreck, that does really nice fried seafood. You sit in a porch area and chow down on simple, delicious food on cardboard plates — fried scallops, hush puppies, clams and oysters, lima beans that all come from that area. That's my favorite.

Does the band plan out where to eat, or is it usually just whatever you can get your hands on?
Usually when we tour the U.S., we try to pack in as many dates as possible since we don't tour too often, so its usually whatever we can get our hands on. We eat at a lot of dreadful gas stations, but we're happy when we go to places like Chicago or Minneapolis where there's Whole Foods or health food stores that have good stuff.

Most memorable meal ever?
That's a question I don't know how to answer, but I will say that the veggie burgers in Norway, especially Oslo, are incredible. Usually, veggie burgers can be really crappy and mushy — anything but meat — but there they were amazing in ways I don't know how to describe. They'd do them on brioche buns, with some mayo and some pickled vegetables. It definitely had a Nordic twist and it was great stuff.

Do you pay attention to the music in restaurants or do you tune out?
Under the best of circumstances, I will zone out. If I really don't like it, though, I'll definitely notice it. Sometimes a friend's band will be playing, which could be good. But there are times when I'm like, "Oh, God. I cannot get away from this!"