Share All sharing options for: Director David Gelb on Jiro Dreams of Sushi

The documentary film Jiro Dreams of Sushi (see an excerpt and trailers here and here) premiered at last year's Berlinale, got picked up right after its North American premiere at the Tribeca Film Festival, and hasn't stopped picking up steam since. The wildly positive assessments so far would suggest that when the movie opens in New York this weekend (and many more cities after that), the audience won't be limited to just sushi and food freaks. In the following interview, the director of the film, David Gelb, talks about how the the project came about, his relationships with subjects Jiro Ono and his son Yoshikazu, and how the human element — the story — makes the film something more than just a piece of food porn.

I've read that you've been in love with Japan and sushi since you were a kid, but I'm wondering how you settled on making a film on Jiro Ono?
I did lots of research on the internet and spoke to lots of sushi chefs, as well as non-sushi chefs, about which chefs would be interesting to film for this movie that I at the time was just calling "The Sushi Movie." It was actually Daniel Boulud who really emphatically told me that I had to go to Jiro and that I had to eat there and shoot it. Then, when I finally got there on my Japanese research trip, I was just blown away by how amazing the sushi was and how delicious the rice was. It was as if I had never had sushi before.

Beyond that, I saw that Jiro was such an interesting person with an incredible story — an interesting family dynamic, too. His eldest son, Yoshikazu, works with him at the restaurant in that pursuit of perfection. It began to dawn on me that this could be a movie about more than just sushi. It could be a film about a very inspiring person and about a compelling philosophy of work and about a family. 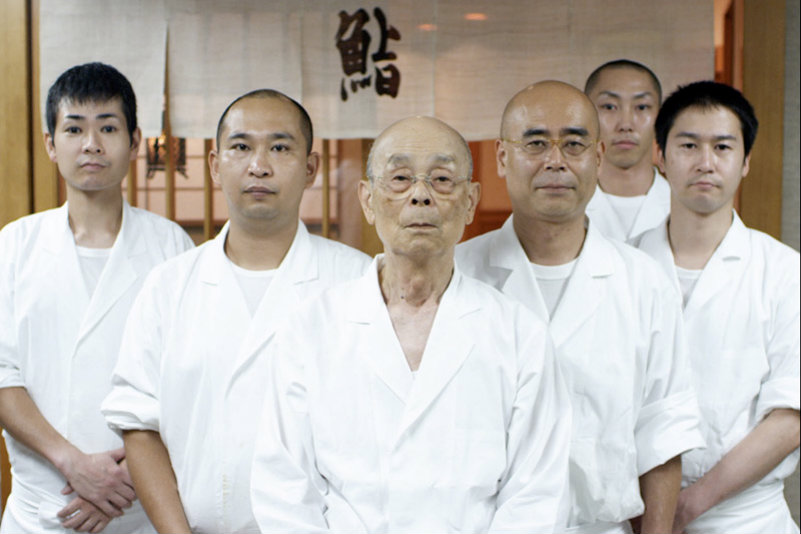 How did you get them to participate and let you in? There was a time, I believe, when Jiro didn't let people take pictures at the restaurant, and he seems like such a focused, stern figure in much of the film.
I owe so much to the food writer Masuhiro Yamamoto, who appears in the film. He's almost the narrator of the movie. He's kind of a big shot in the Japanese food scene. He was a judge on Iron Chef in Japan and has published many guidebooks. He's a well-respected figure and he and Jiro are old friends. So, when I was talking to Yamamoto, he really encouraged me to make the film and also convinced Jiro to appear in it. He really is the unsung hero of the movie, because his whole philosophy on sushi is pretty incredible. He's almost like a sushi poet.

What do you mean by "sushi poet"?
The way that he describes sushi is very compelling. To give you an example, he's the one who first came up with the analogy between classical music and what Jiro does — the notion of the sushi concerto, a clip I think you just posted on Eater. These are the words of Yamamoto. He's the one who has found many of the parallels and facilitated a visual interpretation of the sushi making. He's full of great ideas. He's also a wonderful presence on screen.

You're an American who isn't fluent in Japanese. Did you ever feel like there was a barrier — that you couldn't totally break through and connect with your subjects?
That was my greatest fear going into the project. I speak a little bit of Japanese thanks to having studied it a bit in high school and college, but yes, I had a translator with me. While I was shooting it, there were moments of true anxiety, because they speak very quickly. I would conduct the interviews through the translator, but there would be times when I'd think to myself, "What am I doing here? What the hell are they saying?"

Jiro and his son were very patient with me. They saw the effort coming from me, I think, to keep improving my Japanese and continue learning. I think we achieved a mutual trust because we were observing each other perform our respective crafts — being around each other and working hard. The translator was also crucial in helping build that rapport and letting them feel comfortable showing me things. I think they also regarded me as a student, in some ways. I just wanted to learn and show the story of sushi. I didn't have a preconceived notion of what the film would be. They liked that I was a blank slate.

You say you didn't have a preconceived notion of what the film would be. Can you describe what you were bouncing around in your head going into the project, and how that developed as you shot it?
Originally, I wanted to make the BBC Planet Earth for sushi and show the art of sushi with very high-end cinematic elements and music and featuring the best sushi chefs in the world. I originally wanted to include several major sushi chefs, but that changed after I met Jiro and began shooting and seeing that the story between him and Yoshikazu kept coming out.

It actually became so much more than what I originally had in mind. That's the magic of documentary filmmaking: you think you're shooting one thing, but then a whole world of possibilities opens up. It became about a person, a family, a philosophy. Most of the documentaries that I admire are about a person in an interesting setting.

Having good cinematography and sound design and editing are incredibly important elements, but I think what makes the movie transcend being just a food documentary or something along those lines is the human element. It's Jiro's character. The editor of the film, who is an incredibly talented person and longtime friend, really worked with me to focus on that aspect, because that's what's going to make it compelling to everyone. Shots of beautiful sushi are great, but that can't sustain a film. And I think we found a balance between the sushi shots and the information about the craft and the story between son and father.

On to the human element: Jiro talks about how necessary it is to fall in love with your craft and to have passion, but at the same time, he seems so disciplined that it's worth asking if you think he is having fun and enjoying himself.
Oh, sure. This is what he lives for. He's not smiling most of the time, but that's because he's concentrating so hard. The sense of satisfaction he gets from working as hard as he can every day is unparalleled. Nobody in the world sleeps better than Jiro every night, since he knows that he's given his all every single day and is pleased with it. He even says, "When I make sushi, I feel great."

There's that very tough moment when he describes his father's drinking habit and how he was on his own before he had even turned ten. It's hard to think that experience didn't contribute to his legendary work ethic.
I think he learned from his father what not to do. He has taken a very opposite approach to his life. I think a lot of people, when they are mistreated by their parents, they themselves become bad parents. Jiro is the opposite. Now, he's creating an environment for his children to thrive, even though he comes off as a stern father. He does it for the family the whole time.

Yoshikazu said that Jiro is happier than he has ever been. His work is recognized around the world and his sons are both the heads of their own restaurants.

Now, let's talk sushi. Throughout the documentary, there are variations of the phrase "this is next level" in reference to the food. It's like nothing else out there. How do you see it?
The big difference is the rice. I think a lot of sushi restaurants in the U.S., even the high-end ones, still overlook the rice. Jiro's rice is a little more vinegary than we might be used to and it's more body temperature. They cook it at very high pressure, which allows the rice to be fluffy, but at the same time, each grain retains its shape. So when you eat it, you get this wonderful blend between the fish and the rice. Jiro's mastered it. It ends up tasting like something completely new.

I've never tried snapper like I did at Jiro with that sushi rice. The combination brings out the purest essence of the fish — that's why they call it the purest sushi. His balance is flawless, and all the flavors complement each other.

Another thing that comes up in the piece is the possibility that there'll never be sushi as good as this once Jiro retires or, as Yamamoto puts it, "the inevitable comes." Do you agree with that?
I think that those are the stakes of the situation. Yoshikazu is going to be in the spotlight at some point and will have to fill his father's shoes. But I do think all of his apprentices and followers face an uphill battle because the fish supply and the ingredients are dwindling. It's getting harder to get good ingredients, and the prices are going up and up and up. It's a very difficult business, and to build the clientele to allow you to provide that quality is not so easy. My hope is that the film will help encourage younger sushi chefs to work as hard as Jiro and follow his philosophy.

In my opinion, Yoshikazu is a brilliant chef, and his sushi is incredible. I know that he will continue to strive for that excellence when he eventually takes over. I'll point to what Jiro mentions towards the end of the film, which is that 95% of the preparation happens in the kitchen before he even gets there. And that's an amazing testament to what a great teacher he is. His sons have picked all of that up, and the quality of Jiro will always be there with them.

Do you keep in touch with them, or did this not go beyond the documentarian/subject relationship?
I keep in touch with them and send them updates all the time. When we won the audience award at the AFI Fest, I sent them the certificate. I am so grateful to them and consider them to be dear friends. They went above and beyond the journalist/subject relationship because of how open and kind and patient they were. They did everything they could to make this the best film it could be. They are beautiful people I want to be friends with for the rest of my life. I'm planning a trip to Japan this summer to see everyone — the chefs at Jiro, the apprentices I interviewed, the guys at the fish market. I'm bringing everyone sake.