Earlier this week, New York magazine profiled Diane Chang in the story "When Did Young People Start Spending 25% of Their Paychecks on Pickled Lamb's Tongues?" Here now, Chang on things that were "taken out of context" and "left out of the article": 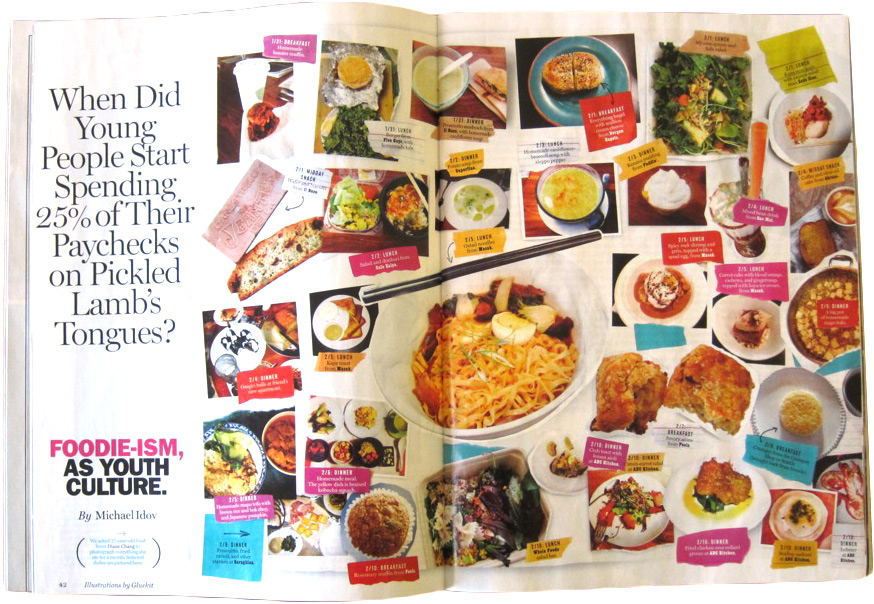 Here is the part that’s missing from my friend Michael Idov’s article about the somewhat sensationalized foodie movement that he believes has superseded indie rock culture, and my role as the scene’s insufferable torchbearer: Well, to start, my eating/spending habits are actually pretty unremarkable. I eat three meals a day—most of which I cook at home. When I eat out, it’s mainly about getting together with friends in a convivial atmosphere. Various points/quotes from the article were taken out of context-- when someone is prodding me for an opinion about food, I’ll give one. Do my friends and I sit around and talk about chefs/restaurants/food every chance we get? No. We’re usually bitching about work.

Sure, I might obsess over food a little more than some, and sure, I might sometimes spend a large chunk of my paycheck on food as revealed in the tally of one week’s worth of receipts. I’m also no different from most people who enjoy the company of their friends over a glass of wine or a bowl of pho, and who want to make sure that their hard earned money is being spent in the most efficient—and delicious—way possible. Which means, when I dine out, the experience has to be worth the time and cost—for me and whomever I’m with. Ironic considering I apparently spent $38 on a cab ride to Flushing for Han Joo’s amazing pork bbq, I know—but I shared the cab with four friends, we were running late, and Michael (the story’s author) had been waiting for us at the restaurant for over 30 minutes. (He had taken his car; I was commuting from Park Slope.) Previously, I had taken the 7 train all the way to Main Street and then a bus over to the restaurant—spending over an hour in transit. The pork-fat-drenched kimchi was well worth the tedious commute, but the $38 cab fare was better—which came out to be approximately $7 a person.

I thought Michael did a great job shedding light on an obvious, cultural phenomenon: young people are showing a hardcore dedication and interest in the culinary arts and express their passion for it on the internet, in their day-to-day conversations, in their idolization of chefs. They, we, flock to sites like Eater, Grubstreet, Serious Eats, Food52, Foodspotting and devour shows like Top Chef, Chopped, No Reservations etc. Food has undoubtedly become a legitimate hobby and a creative outlet—whether you’re hovering over the stove or waiting to be served. I appreciate Yelpers posting photos. It’s fun to know what fried mayonnaise looks like even if you can’t afford to eat at WD-50. I just hate when Yelpers slam restaurants without divulging on the “why.”

But I guess Michael’s POV on foodie culture wasn’t the controversial part. It was the fodder about me that ruffled some feathers. Captured in the article was one week of restaurant going and grocery shopping. Some weeks, I spend way less. Depends how my bank account is looking; depends whether or not I have time to eat out or cook elaborate meals. Outside of rent, most of my paycheck goes to paying taxes and student loans. I live in Park Slope and was lucky enough to find a great, affordable apartment with an enormous kitchen that I share. I don’t splurge on cable but I like records, and books. Some people want to pay over 2k in this city for their own one-bedroom in Manhattan; I prefer to spend the difference on eating out with friends. Prioritizing food over a “ballin” pad does not make me a foodie. It does make me a typical 27 y/o New Yorker trying to be strategic about where my money goes. This also means, for the time being, I might avoid places like Eleven Madison Park or Per Se and opt for places like Mile End—a restaurant that I know makes awesome food, offers great service, and is a place my friends and I can afford. I’ll always leave satisfied. My meal at Momofuku Ko (more than 5 years ago) was great but it just didn’t satisfy me the same way the Momofuku burrito at $8 dollars had seemed to. And all the work it took to eat at Ko—the hours of refreshing the webpage to get a reservation at 7am PST (10am EST). As for my experience at M.Wells—I waited 1.5 hours for a table, loved the maple donut, but I just didn’t think it was all it was hyped up to be. But that’s not stopping me from wanting to try their newly opened outpost at P.S.1.

And another crucial tidbit left out of the article: while I am a “civilian” now, I worked in food publishing for 4+ years on the editorial team of Bon Appétit magazine. I never considered myself a foodie because well—food was part of my job. I worked with an amazing team of editors/art directors who, like me, were as passionate about other topics as they were about food. But I had the luxury of being exposed to unique ingredients, upscale restaurants, and not judged for my awareness of chefs/restaurants/culinary trends. Now, I’m lucky to have friends who are in the food industry— and thanks to them I have had the chance to eat at ABC Kitchen, Le Bernardin, Daniel and all the other “high end” notables in NYC. But when I have to pull out my own wallet, I prefer eating a burger at Diner, fried chicken at Peaches, pho at Sao Mai, or making Chinese beef noodle soup at home for my pals.

Speaking of home, growing up with my grandmother influenced how I currently feel about food. In the 40s, she fled war torn China with my grandfather for Taiwan, poor and uneducated. Food became knowledge she could share with her children and a way to communicate with her American-born grandkids. At 97 years old, she’s still wok-n-rolling and her food is the best! From her, I learned that food engenders camaraderie and stimulates curiosity. It brings people together; it offers insight into different cultural experiences and perspectives. I’ve also learned that good food doesn’t need to be expensive. It wasn’t in the San Gabriel Valley (where I was raised), but here in New York, it can be.

If you ask my friends, they’ll probably agree that I really love to eat. They’ll also acknowledge that I’m equally as passionate about cooking and inviting friends over for home-cooked meals. In fact, many of them are far more aware of new restaurants and food trends. I always go to them for recommendations. So as you can see, I’m actually pretty unremarkable and in retrospect, maybe not the most appropriate subject for Michael’s research. And as my friend Nelson said in response to a question by Michael about the foodie movement—“who the fuck doesn’t love food?” But that, along with several other very intelligent things my friends said about what food means to them, didn’t make it into the article.