How to Get a Reservation at Le Pigeon in Portland

Share All sharing options for: How to Get a Reservation at Le Pigeon in Portland 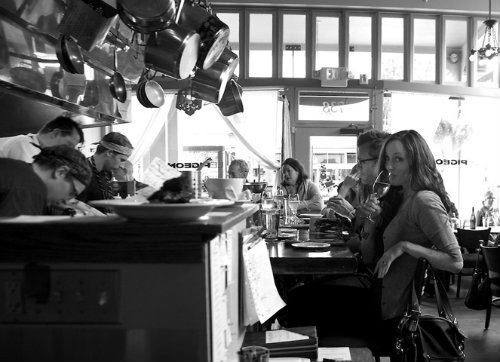 Last year chef Gabriel Rucker earned a James Beard Award for the witty, product-driven cooking he puts out at his Portland neo-bistro Le Pigeon. The restaurant is small and manic, with just under forty seats, and it's perhaps the most popular eating spot in town. In the following interview, general manager Andrew Fortgang discusses Le Pigeon's fairly straightforward reservations policy, unpredictable walk-in situation, and the best ways to navigate getting in.

How would you characterize the restaurant's popularity?
Demand is very strong. We never like to say that we want it to be that no one gets in, but we are happy we are busy.

How does your reservations system work?
We do over the phone and online through OpenTable. There are 36 seats altogether, so it is a small restaurant, and about 10 of them wrap around the open kitchen. That's the chef's counter, which is only for walk-ins. We reserve the other 70 per cent or so of the restaurant.

How far in advance can someone reserve?
If you really wanted to think far enough ahead, you could make a reservation a year ahead. We're really busy, but we're not the French Laundry, so we're not too worried about that.

How far in advance will a night fill up?
Reservations will fill up two to three weeks ahead. Prime time tables maybe a little more than that.

For the walk-ins, is the food the same?
The experience is the same in terms of the food, but some people frankly kind of prefer it because you are right there watching the action. It's a wrap-around counter in an L-shape. It's the best seat for the show, and you can talk to the chefs. You wait, but you get the best seats.

And how bad do the waits get throughout the week?
Waiting times are such a funny thing at a small restaurant like this. They can change so drastically. Oftentimes, on a Monday or Tuesday when it's not that busy, those walk-in seats won't fill up right away. But suddenly they will, and the wait will jump to two hours. On busier nights, it can of course get pretty bad, but if you come in a tad early, it's not miserable. There's a nice rotation. But depending on things are going, it can be ten minutes or it can be two hours.

I'll tell you what I tell people over the phone. The God's honest truth is that it's really difficult to guess here before the night gets going.

It seems like it's a bit difficult to get an idea of how long you're going to wait on a given night. So, what's the best advice you can give on getting in?
I think the best advice always is to call. If we don't have the reservation you want, we take a cancelation list. And it definitely doesn't hurt to call the day of, since things change so frequently. There's a very good chance there'll be an opening if you follow up.

And if you're coming in without a reservation, come down and assume that you aren't going to have dinner for about 45 minutes. There's a good local brewery, a cocktail bar, a dive, and you can go get a drink. We don't mind people leaving for a bit. We'll call when it's ready.

How often do you turn to the cancelation list?
We almost always go to it. People will often think that they won't get a call, but honestly, it's the first thing we look to. It's so worth doing.