Jeremiah Tower on Cookbooks He Just Can't Get Rid Of

Share All sharing options for: Jeremiah Tower on Cookbooks He Just Can't Get Rid Of

Welcome to The Cookbook Shelf, in which Eater talks to all manner of food professionals about their book collections. Warning: serious book nerdery ahead. 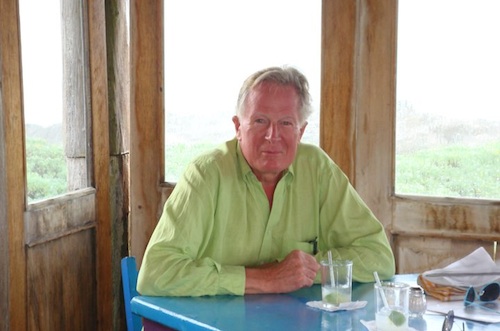 When legendary Bay Area chef Jeremiah Tower of Chez Panisse and Stars fame sold his vast cookbook collection to culinary bookstore Omnivore Books earlier this year, the inscribed copies and tattered first editions quickly sold to the likes of Thomas Keller and Alice Waters. In the interview below, Tower discusses which books he has decided to hold on to after the sale, how cookbooks (and champagne) lead to inspiration, and the books he's writing. Note: the below is half interview, half a sort of annotated-bibliography.

Which books and authors have you found to be the most influential over the years?
You mean apart from Norman Douglas' South Wind and Rex Stout's Nero Wolfe books? Nero's assistant and cook in those books, well, he was both of them, is great reading for American food. The kind that 21, Mortimer's and all those followed served.

Fernand Point's cookbook, for its perfect sensibility and individual classicism. The Delmonico's Cookbook by Charles Ranhoffer. It's a great American book that says it all about the history and tradition of American food. Félix Urbain-Dubois, who came between Careme and Escoffier. And of course Escoffier's Ma Cuisine, which I started reading when I was 17 and cooked my way through in college. Elizabeth David and Richard Olney, of course. The Jean-Louis Palladin Cookbook, that was the first to use what are now ubiquitous presentations. All of the photography from Australian Gourmet Traveller.

What do you find useful or good in a cookbook? And what do you dislike seeing?
The photo and the recipe on opposite pages from each other, that's useful. I still cannot figure out how to use a Kindle in the kitchen. Oh, and I like it when the recipe's list of ingredients is formatted like a shopping list.

According to your memoir, much of your culinary education came from cookbooks. How do you think that affected your cooking, if at all?
All of my ideas came from reading cookbooks published between 1600 and now. I read them and put them away, and in the ensuing weeks ideas for dishes, restaurants, fast-service concepts come to mind. This usually happens after one glass of champagne but before the third.

If you could have the new generation of chefs read any book, which would it be and why?
Just one book? Well, so they can stay on track and not fall off — you wouldn't want a critic devaluing one of New York City's best restaurants for using "ingredients we have seen before," for example — Escoffier's Le Guide Culinaire. Just to know where it all came from.

Your website mentions you're working on some upcoming books?
Yes! One is about the tradition of healing though the things you eat, but a history going back 2000 BC as well. The other was inspired by a quote from the great A. J. Liebling, about the extended Mediterranean that reaches from Istanbul to New Orleans, Havana and the Yucatan.

[The Quote: "You are right. We are Mediterranean. New Orleans resembled Genoa or Marseilles, or Beirut or the Egyptian Alexandria more than it does New York. Like Havana and Port-au-Prince, New Orleans is within the orbit of the Hellenistic world that never touched the North Atlantic. The Mediterranean, Caribbean and Gulf of Mexico form a homogeneous, though interrupted, sea."]

I know you sold a lot the majority of your cookbook collection recently. Were there any that you kept? If so, why did you keep those books?
These are in no particular order.

· A Flummery of Food by Andre Simon — Because the little English food writing essays spur me on to write similar ones.
· History Laid Bare by Richard Zacks — Not a cookbook, but about “love, sex, and perversity” and that is food as well. It's great material for my book on Aphrodisiacs and Shamanistic Food.
· Food, A History by Felipe Fernandez-Armesto — Because I need it also for the above book.
· Cochon by Philipe Roman — Because the poems that go with the recipes are quite amusing. I read it once a year.
· Le Grand Dictionnaire de Cuisine by Dumas — Since it's one of my favorite books, and I read it nonstop. Also, I need it for writing the same book I mentioned above.
· Found Meals of a Lost Generation by Suzanne Rodriguez-Hunter — Because I wish I wrote it, and in one book I am writing, I make up my own fictionalized true stories about people who dined together or should have and what they ate or should have.
· Consuming Passions by Philippa Pullar — Because it's one of my favorite books on food, and I have read it every five years since it was published in 1970. Massively intelligent.
· The Gourmet's Companion, edited by Cyril Ray — Because Ray is very good.
· Kettner's Book of the Table by Eneas Sweetland Dallas — Because who can live without it and besides it was in too bad condition to travel or be sold.
· The Penguin Companion to Food by Alan Davidson — Because I need it all the time.
· Thou Improper, Thou Uncommon Noun by William Espy — It's not a cookbook, but filled with very amusing bits on food. I need it for the Aphrodisiac book.
· South Wind by Norman Douglas — Just so I can read the most perfect comment on what a chef should be, again every five years.
· Culinary Cultures of the Middle East by Sami Zubaida — I need this for the book inspired by Liebling.
· Sweet Myrtle and Bitter Honey by Efisio Farri — Same as above, and it's a wonderful down to earth book.
· Week In, Week Out by Simon Hopkinson — Since everyone needs a book like that.
· The Barcelona Cookbook by Sasa Mahr-Batuz and Andy Pforzheimer — Fine restaurants, fine book.
· The Art, Culture & Cuisine of Ancient & Medieval Gastronomy by Phyllis Pray Bober — The best history (with passion) from the beginnings in Mesopotamia. Love it.