Top Chef Finale: The End Is the Beginning Is the End

Share All sharing options for: Top Chef Finale: The End Is the Beginning Is the End 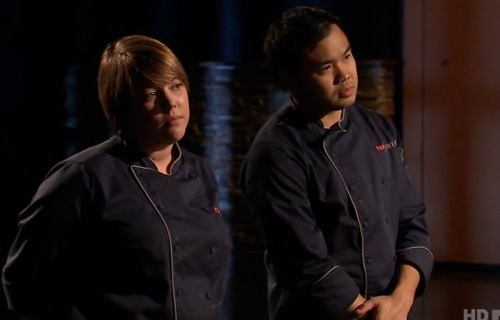 It seems like only seventy weeks ago we first met this season's crop of Top Chef hopefuls, when in reality it was about eighteen weeks. Eighteen weeks is a tremendous amount of time. Isn't that how long a baby takes to grow? I am no wombxpert but I am pretty sure there is a Julianne Moore movie about pregnancy called Eighteen Weeks Later. Either way, we've spent a lot of time crying and sweating with those chefs in Texas. (They cried and sweat on account of the challenges they were forced to endure, we cried and sweat on account of the challenges we were forced to endure watching.) Remember when Padma rode a horse? Or the time a state police officer nearly ended the season with a routine traffic stop? Or when Heather was caught digging in the dirt for beetles to eat? So many memories. They will stay with me for a lifetime, or at for least a few days after last night's finale. I better write fast. They are fading already.

So what happened this season? I have spoken to no one that has any great love for Top Chef: Texas. But I don't blame the chefs. This year was full of talent, and also full of unlikable jerk-offs, but so is every season. The conceits of too many of the challenges were too complicated. It was frustrating to watch people lose, or win, because of things like heat and bees and bicycle rides. It is a silly reality show and there is a time and a place for Double Dare-style cooking relays, but my patience was worn thin by having to watch James Beard-winning/nominated chefs dig around in the giant nose for a flag every week.

This year's finale, as many of them are, is mercifully simple. Only Paul and Sarah remain. Paul, the lovable bundle of nerves and imaginary boyfriend of MANY of my friends, is the favorite to win, as he has been much of the season. He rarely stumbles, and he always puts great food on the plate, so much so that I think he's already banked over sixty grand from various challenges. Meanwhile, the villainous Sarah has been on a roll. She says herself that she's has "a lot of momentum," like if she was walking down a hill. She needs this and she wants this. She reminds us for the one hundredth time that she put her wedding on hold for this. No one watching this show is asking, "When's her wedding?"

The final challenge for the chefs is to create a four-course tasting menu in the restaurant of their dreams. In Sarah's dream restaurant, all the customers are Charlize Theron wearing a t-shirt that says "Sarah has a good personality and people like her." In Paul's dream restaurant, he graduated college but also still sells weed. Paul and Sarah will get some help in the final challenge from a handful of sous chefs, all familiar faces. Heather's there, and sadly she received a head injury sometime after being eliminated.

Competing for the eight sous chefs positions are contestants from earlier in this season, as well as master chefs Barbara Lynch and Marco Canora. Those two run extremely well-regarded restaurants and it's odd to have them competing alongside people like that guy who had his foamer tip break in the very first episode. That poor guy. I hope his nickname at home is Foam Tip. Everybody's got 45 minutes to compose one dish to impress Paul and Sarah. The best Top Chef contestant of all time, Tyler Stone, is back. "I am a 22 year old personal chef and America isn't ready for the level of quality I can bring to the table. I have a great face and good personality and I think people aren't immediately disgusted by my presence." He has not become any less punchable. 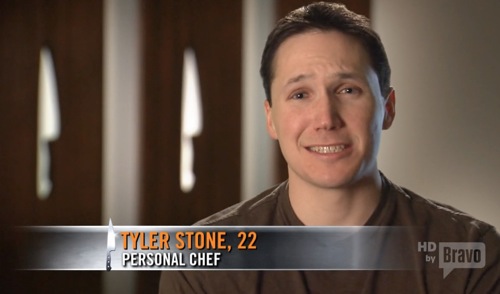 The chefs prepare their dishes, and Paul and Sarah come in to taste and pick their teams blindly. It'll be tricky, as each chef wants certain sous chefs and have to play at guessing them by their dish. Malibu Chris Crary made an Asian dish to try and lure Paul into picking him. Chris of course is a master of luring people into places that might not normally have gone. "You mean you've never been inside a men's room stall before? That's crazy, you should come with me." Chris is also a master of modern art and having an apartment full of boob paintings, as we remember. His rapey ploy works, and Paul picks him as his sous chef, alongside Master Chef Barbara Lynch, Ty-Lor, and Keith. Sarah's angling for Heather, as it's easier to hunt and eat raw boar when you've got someone to flush it out of the woods while you flank it, but her calculations fail her at first. She gets Heather, Nyesha and Grayson, but she also gets Tyler. Yes! This is the best thing to happen all season. No one is happy, and I feel a little bad for Tyler. (I don't at all.) Sarah says she won't let him butcher. No one wants to make eye contact with him. 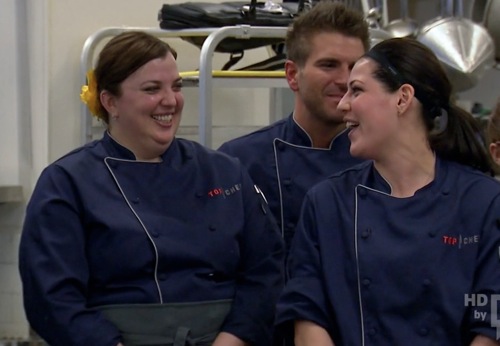 Everyone heads to the Farmer's Market and to Whole Foods to shop. Tyler's the worst and seems bent on Sarah doing things she's not comfortable with, so she tries to corral him by giving her simple tasks. "Tyler, can you count how many aisles there are in the store, then can you find a man with a red hat and ask him what his favorite ice cream is? If you can count backwards from a thousand real slow it'll really help my dish." Paul says his parents were disappointed when he failed out of college. Did we know he failed out? To hammer the point home that he did not finish college, they show him counting money at the register and looking a little confused. He must have trouble keeping track of figures. 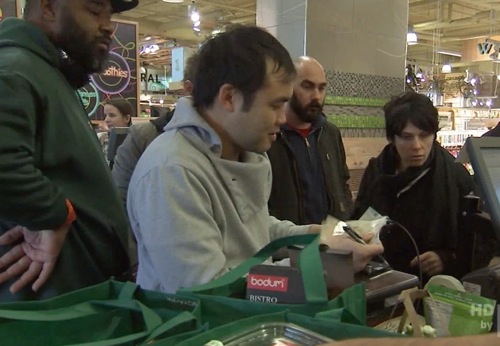 Sarah's restaurant at Black + Blue merges her German and Italian side and also the side that has to answer a million questions for Tyler. He's relentless. "How much celery do you need? How small should the slices be? Why does my face and nose look like this? Is there a way to fix my voice? How uncomfortable do I make you when I point really intensely at things?" Sarah yells, "Just chop the celery!" At Coast, Paul watches his teammates closely. They don't know the type of food he wants to cook for this, which is Japanese with Asian influences. That's a little confusing. Isn't that like a Square with Rectangle influences?

Sarah and Paul sit down to taste some Terlato wines with Tom and Emeril. Man, of whom do the Terlato guys have photos of? It's crazy the placement they get on this show. Almost as crazy as the Eyes Wide Shut study that Tom and Emeril are sitting in. "Want to strangle a working girl?" 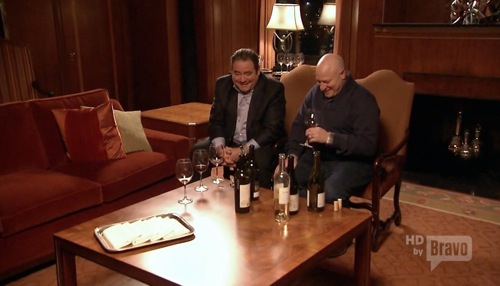 The day of service arrives, and Tyler Stone shows up in dress pants and dress shoes. That's incredible. He is so elegant! You'll definitely taste it in his food. People will bite into his diced celery and ask the waiter, "What elegant person made this food here? My mouth feels like it's wearing an evening gown." He also works incredibly slowly, despite prodding from Sarah. The best they can do is ignore him. Grayson says, "We're gonna jam out with our clams out while Tyler does whatever he does." "Jam out with our clams out" is super and I'm nearly positive that's the first time that's been said on TV. Grayson, marry me. I've got my clam out, waiting. (I am pretending to not know what the phrase means.)

Each chef gets a surprise summons to a table, only to be greeted by their family and significant other. There are many tears. As previously noted, Paul's girlfriend is extremely attractive, and his parents are even more adorable. I love them all. Is there room for one more in your family? No? OK. 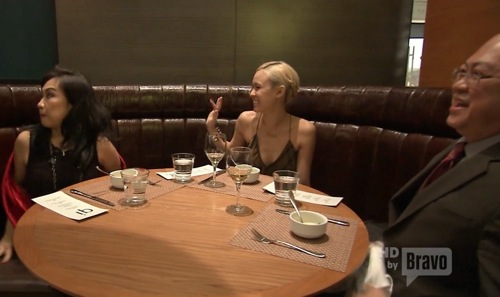 They serve a lot of great food. The first service is not identical to the second, sometimes for better and sometimes for worse, but overall it is very strong food. A whisper from her fiancé saves Sarah from bones in her trout. Paul accidentally instructs Keith to fire the chawanmushi too early for the second service, and it overcooks. Here are pictures and words. 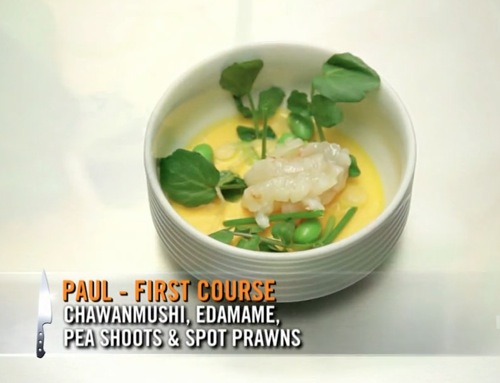 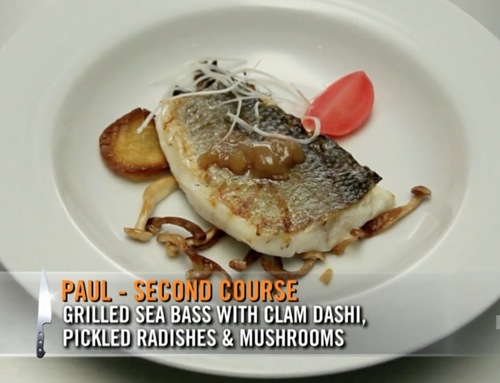 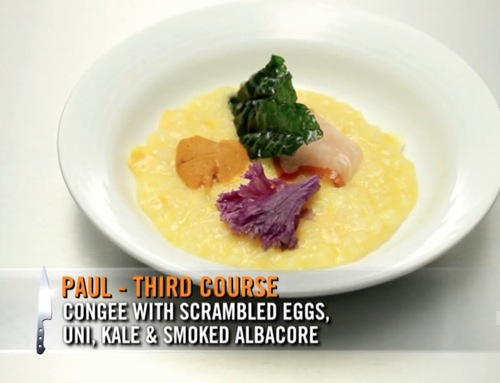 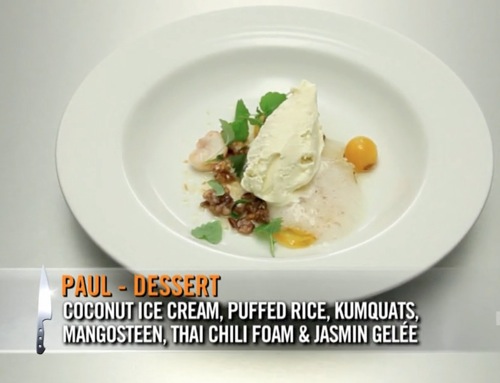 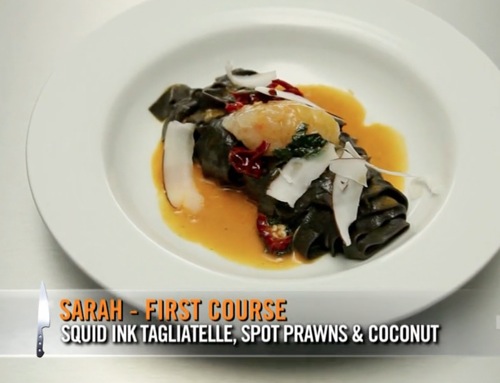 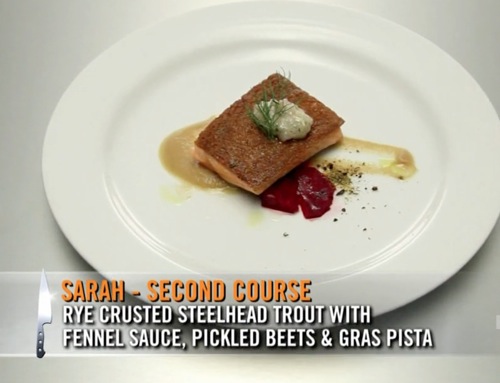 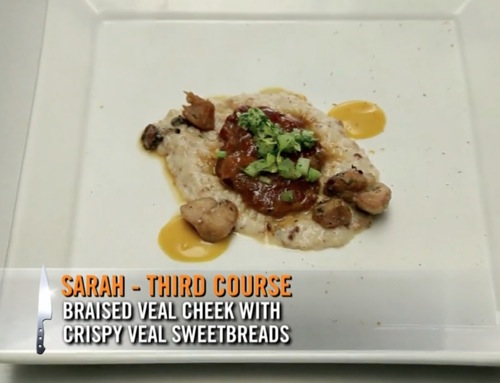 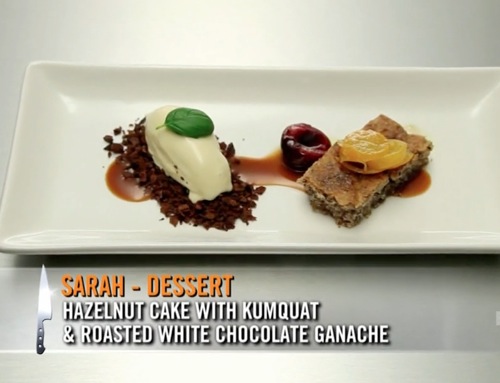 The judges have heaps of praise for the two chefs. Tom says that in nine seasons, including All-Stars, "this the best food we've ever seen in a finale." Padma snaps that she hates white chocolate, but despite that, Sarah's dessert was maybe the finest she's ever had on the show. For the first round of judges, Paul's mushi was perfect. Tom loved his savory dessert, and Emeril can't stop going on about the broth in Paul's sea bass. It's close. Their nitpicks are minor. Some of Paul's mushi was overcooked, Sarah's beets were under-pickled, and the sweetbreads were dry. Paul may have over puffed some of his rice. Overpuffed rice? Let's all calm down.

The chefs head to the stew trailer to sip rum and wait. Then they return to a round of applause from their families and fellow contestants. I am not sure if I see Tyler. I assume he was taken out and shot. Grayson is wearing a rock star fur. 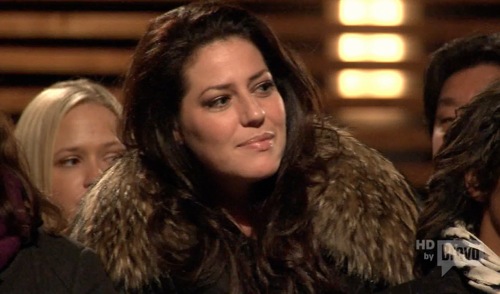 Padma announces the winner. As we could have told you by episode three, Paul wins. That guy is ice cold. He giggles, "Hah. I'm Top Chef. Fantastic! Him winning is the only thing that nearly makes this season worth it. His parents are very excited. His dad is so cute. I am dead.

Sarah does not take it well. She perhaps takes it as poorly as any runner-up I've ever seen. Her family consoles her, and she says, "I think I deserved to be Top Chef." So does Tyler Stone, I bet. But only Paul is. Padma raises a glass to the two finalists, and to their new Top Chef. At last, it is finished. It is boring to talk about so and so being the worst season ever, but, uh, I wrote about thirty thousand words on this season. That's an insane amount. But not one of them brings me as much pleasure as this one: goodbye! 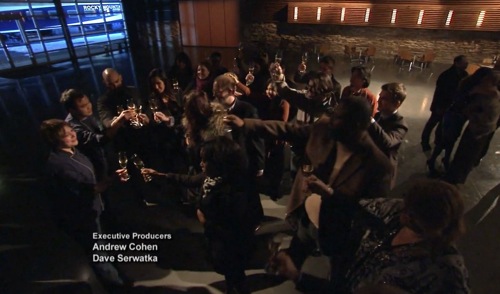