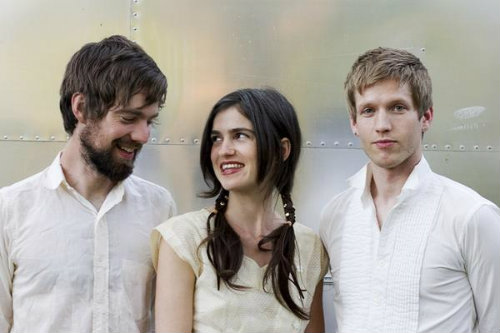 Next month, North Carolina indie/freak/pop folk band Bowerbirds will release their third album, "The Clearing," which many are saying could rightfully catapult the group into the same category as other like-minded and more familiar artists like Devendra Banhart and Bon Iver (listen to a track here). Even with all that attention, their violinist Mark Paulson is still happy to be working at a restaurant in the band's home base in Raleigh.

In the following interview, Paulson shares his experiences in the service industry, which he admits he'll soon probably be leaving, his favorite restaurants in North Carolina, his love for places like New York's Blue Hill, and the importance of feasting while on tour.

I am told you work at a restaurant.
Yeah, right now I work front of house at a place called Frazier's by the university in downtown Raleigh.

What kind of place is it?
It's sort of a bistro — seasonal new American. It's a wine bar, essentially. We do about 68 wines by the glass.

How did you end up working in restaurants?
When I moved to Raleigh, I randomly got a job at a restaurant that's no longer in business. The chef there, Ashley Christensen, is gone, but was very successful and quite good.

I interviewed the guys from Megafaun, and they love her, too.
Yeah, they're very fond of her!

How did you learn about food? Has it been just a gig, or do you love it?
I cooked for a while back in Iowa and have always been enamored with food. Not so much wine, but that changed when I started working at this place. I worked in Iowa for five years for a chef who really followed the Alice Waters way, and that taught me everything I know basically.

How do you manage being in a band that's on the rise while having what is probably a demanding restaurant job?
I do it because it allows you a lot of flexibility. And it's not something I'm embarrassed to do; I love it. At some places, you can be gone a month here and a month there, and it's fine. But now, the place I'm working is much smaller, and our touring stretches are getting longer, so this may be the last service job I ever have. I'm a little sad about it.

What restaurants do you like in Raleigh?
Raleigh is probably the least exciting of the three North Carolina cities, but there's still some great stuff. You've got the place where I work, you've got Poole's Diner, you've got a new place called Mandolin.

A lot of places are kind of doing following the style of the established restaurants like Magnolia Grill in Durham. It's sort of this southern, seasonal, fairly sophisticated cuisine, and a lot of places are following that format. And there's such a wonderful foundation, so much to draw upon, that it's pretty natural for a lot of chefs to get into.

The energy is coming out of Durham and Chapel Hill. There are places like Piedmont, Vin Rouge, Rue Cler, and then smaller spots like Guglhupfs, a great bakery in Durham. There's actually a patisserie out of Cary called La Farm, which is phenomenal.

What are your favorites?
There's a place called Herons, which is connected to a hotel, and it is fantastic.They've got their own greenhouse with micro greens and herbs, and everything is done at such a high, consistent level. It's definitely not a gastropub or the most comfortable place in the world, but it is the place to splurge.

She doesn't really need the press, but Poole's is pretty damn cool. It's a diner space with tricked out southern cuisine, prepared extremely well. Super solid, and contends with anything I've had anywhere, unless you want to get into the high echelon stuff.

How about places you like to go to on the road?
Well, first off, I'll talk about the places that I really want to go to but haven't been able to visit because of the heavy touring or because I just haven't gotten around to it: Chez Panisse, Le Bernardin, and Alinea.

But we tend to go to more organic places, actually. We went to place in Berkeley called Gratitude Café, which was vegan and raw. We didn't know what to expect, but it was just amazing. That was right when the raw craze was starting, and the creativity and quality of it was really surprising.

In New York, I like to go to Blue Hill.

Stone Barns or Manhattan? And what do you like about it?
I've only eaten at the Greenwich Village one. The premium on the ingredients is obviously special. They're sourcing from their backyard, essentially. You can have an endive, quail egg, lardon salad and know that that egg was picked that morning from the nest. I had a pork tenderloin dish that was perfectly brined, perfectly cooked, perfectly pure. The reverence they have for what they're putting on your plate is so evident. And the pricing is actually not so bad.

On the road, Whole Foods is sort of the savior. But in the U.K., Marks & Spencer is just incredible. Being able to stop and buy really nice prep-packaged food that is miles ahead of what you can usually get in the U.S. is a treat. It's relatively awesome.

Any last words?
You know, I wish we had more time to feast on tour. We did a tour with Bon Iver a while back where we did a few dinners where we ordered every single thing on the menu and had a wonderful time. I miss that. The times that you are able to do that, it's just the best.