Share All sharing options for: The Stepkids' Dan Edinberg Likes Dining With Techno 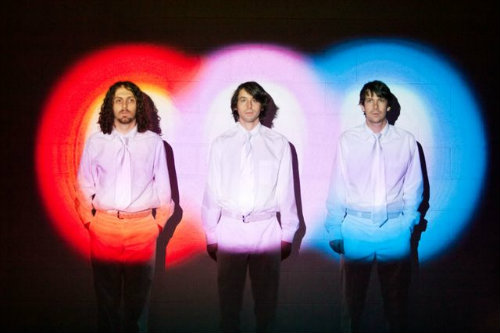 The Stepkids describe their sound as "a fusion of punk and jazz, West African and 1960s folk, neo and classic soul, classic funk and 20th century classical." In other words, it is made up of awesome things. And it makes perfect sense that they'll be heading out on tour with neo-soul phenomenon Mayer Hawthorne (see his Sound Cheque here) in support of their self-titled debut. It is not a bold move to say that these guys will catch on, and fast.

I got on the phone to talk to bassist and keyboardist Dan Edinberg about his eating habits, and as it turns out, not only does he know good food in New York and across the U.S., but he also runs an empanada company with his girlfriend.

What kind did you make?
I don't even know if we have a type of paella. We just use saffron and some seafood stock, some shrimp and mussels, and that's about it.

I actually have an empanada business on the side. I don't even know if my manager knows that. It's just something my girlfriend and I do on the side — she's Argentinean.

Oh, cool. What kind do you make?
I like our original recipe, which is ground turkey, cashew, apricot jam, and dried apricot.

We've only been doing the company for fun, but I think we're starting to make a mark in the New York empanada scene [laughs]. It's very hard to find the homemade Argentine style that we do. We do one that's beef, olive, hard-boiled egg, and raisin, which is actually quite rare. As the band gets busier and busier, though, I'll probably have to find a sub for the empanada company.

Where do you like to eat in New York, where you are based?
The first place that comes to mind isn't in New York. It's Sally's Apizza in New Haven, Connecticut.

What do you like about it?
It's a coal oven pizza, which is very important. The higher temperature it's cooked at, the better it usually is. All the workers get black all over their hands and bodies, which is cool.

I get the cheese-less tomato sauce pie, which I think is the best in the universe.

What about in New York?
I like to go to Smorgasburg, the market in Brooklyn on Saturdays.

Which are your go-to spots there?
I really like Porchetta, which is my go-to. I also really like Bon Chovie for their fried anchovies. It's pretty crazy. I really like Di Fara in Brooklyn and UFC Chicken in Jackson Heights. In Flushing, I like Spicy & Tasty. I also really enjoy Dominick's on Arthur Avenue.

That's a pretty remarkable group. Care to describe what you like about some of them?
Dominick's is my favorite restaurant in New York. They don't really have a menu. You just go in and ask what they have for that particular night, and it's always the best. They usually these baked artichokes that are out of control. Even if you order a simple chicken in a lemon and butter sauce, it's immaculate.

Then UFC has my favorite fried chicken. They slow roast it for a while and then flash fry it, so it's not as unhealthy as most other fried chicken. All the sides there are pretty terrible, but if you stick to the chicken, you're good to go.

What about spots you've hit on the road or during your travels?
My favorite place in the entire universe is Mrs. Johnson's bakery in Austin, Texas. It's a doughnut place. It's an amazing experience to go there, because they actually have fresh doughnuts! And the gentleman that serves there has always just given me donuts without asking me to pay. I went in there once and he just gave me some and refused to take my money, so I just started putting money in the tip jar as I kept eating. Normally I'm not into doughnuts, and that's because they're not usually fresh.

So I'm assuming it's nice and warm when you get it?
Totally.

Other places?
One of my favorite places is Iva's Chicken Dinners up in Sterling, Michigan. It's the simplest, freshest fried chicken. They make their own tomato juice, too. Everything is nice and fresh. Just awesome.

Finally: do you pay attention to the music in restaurants or do you tune out?
I pay a lot of attention, since it really affects my dining experience.

What kind of stuff do you hate?
It's weird. Because I'm a musician, you can catch me hating something one week and then being completely obsessed with it the next. Hopefully the food is so good that I don't notice the music, but often I do.

I tend to like it when there is one particular style of music playing in a place and not a mix, for some reason. There's no one good music for dining, but my girlfriend and I have actually been listening to a lot of techno when we eat at home. It's good eating music, because you can just zone out.

· The Stepkids [Official Site]
· All Sound Cheques on Eater [-E-]