Share All sharing options for: Michelin Announces 2012 Guide For France 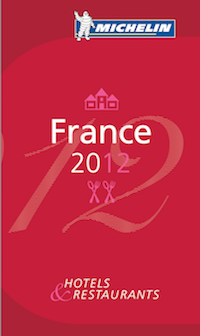 Ten new two stars were announced, including two in Paris: Sur Mesure par Thierry Marx and L'Abeille. A whopping 58 restaurants got their first star, bringing the total number of one star restaurants in France to 485. And now the Michelin Man can rest his weary head until the 2013 announcements start; rest well, Bibendum. Here's a press release:

Scheduled for release in bookstores on March 1, the 2012 MICHELIN guide France offers a unique view of the country’s hospitality industry with 4,457 hotels and 4,289 restaurants recommended, 426 establishments listed for the first time, 1 new restaurant with three stars, 10 with two stars, 58 with one star and 124 new Bib Gourmand restaurants. In ten years, the number of starred restaurants in France has risen by 15% and the number of Bib Gourmands by nearly 40%. Dining every day in a wide variety of restaurants across all price categories, the MICHELIN guide inspectors can attest to the fact that quality everywhere is on the upswing.

A new restaurant with three stars, Flocons de sel now ranks among the 105 restaurants around the world that are “worth a special journey.” Located atop Mege?ve, the restaurant headed by Emmanuel Renaud, a chef whose talents have been confirmed today is on top of the gourmet dining world. His restaurant has become an indispensable destination for lovers of mountain scenery and fine cuisine.

With an expanding array of culinary trends and a constant focus on ingredients, high standards of cooking and renovated interiors, the French restaurant industry is being revitalized and transformed. Despite the current economic environment, young chefs are boldly – and successfully – carving out their own niches with new gourmet restaurants.

As proof, a total of five restaurants that formerly displayed the Bib Gourmand label have this year been awarded their first star: l’Auberge de l’Abbaye in Ambronay (01), L’Arbre in Gruson (59), L’E?ventail des Saveurs in Rostrenen (22), Le Bec au Cauchois in Valmont (76) and Le Julie?nas in Villefranche-sur-Sao?ne (69). From the most prestigious restaurants to simple bistros, the same commitment to quality is lifting the entire French gourmet dining scene and providing the guide’s inspectors, who test the restaurants every day, with new – and renewed – experiences. Dining anonymously like ordinary customers, they systematically pay their own bills. However, as true hospitality industry professionals, they painstakingly judge each dish to ensure that the restaurant meets Michelin’s criteria in terms of product quality, preparation and flavors, the chef's personality as revealed through his or her cuisine, value for money, and consistency over time and across the entire menu. The best restaurants are awarded the Bib Gourmand label or stars, distinctions that are based solely on cooking quality and are always attributed on a consensus basis. Comfort and service are rated separately on a scale ranging from o? to o?.

Throughout the month of March, Michelin is for the first time ever offering the 2012 MICHELIN Guide France Hotels & Restaurants iPhone application free of charge with each purchase of the print guide. The application is the perfect complement to the printed guide, enabling users to consult the Michelin inspectors’ selection of hotels and restaurants at any time. It can be downloaded from the App Store simply by entering the promotional code included in the guide.

The gourmet cooking scene in the French capital is also vibrant. The 2012 MICHELIN guide Paris explores some 453 restaurants and 60 hotels, of which 72 first-time selections. The guide includes attractive descriptions with photos, a special Paris Pratique section containing useful advice, 11 theme lists enabling readers to choose according to their desires or budget, street plans of Paris’s 20 arrondissements and a removable map of the entire city.

For more than a century, the MICHELIN guide collection has been committed to making life easier for travelers by providing them with a selection of the best restaurants, hotels and guesthouses around the world. Today, the 27 MICHELIN guides cover 23 countries on three continents.

2012 MICHELIN guide France Hotels & Restaurants: the iPhone application:
- The full selection of hotels and restaurants listed in the 2012 MICHELIN guide France - Functions: search for nearby hotels and restaurants, by address or name; list of favorites; customer comments; map view of the establishment; sharing opinions and suggestions via social networks, etc. - Available in five languages for iPhone. €7.99