A Beardless Man Stole a Sconce From Heidi's Minneapolis

Share All sharing options for: A Beardless Man Stole a Sconce From Heidi's Minneapolis 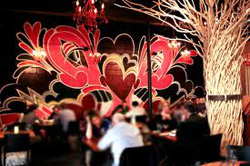 There are some restaurant thefts that you hardly even notice — flatware here and there — and others that turn into epic tales. Today, Heidi's Minneapolis chef and owner Stewart Woodman tells a very detailed story about a wall sconce that went missing in his restaurant. A very sneaky couple — mild-mannered and beardless so totally not suspicious in any way — managed to unbolt the sconce from the wall during their meal and walk out of the place unnoticed. FYI: There are also meat mittens in this story.

"You name it, if it ain’t nailed down some folks will boost it, straight up lift it, craziest shit you ever saw. In fact, we even had a sconce boosted in our old spot. Dick Huss, the notable glass blower, had made a series for the joint. They were bolted to the wall, yes bolted. Now in all fairness I am not a bolt expert, in both the installation nor in removal, but as far as I could tell, you would need some sort of bolt holding and turning device. I think they are referred to as "wrenches" — though I could be wrong about that.

Not only were the sconces, (I’m a big fan of wall sconces by the way, not that is not relevant to this conversation in any way shape or form) bolted into a plaster wall, it was a plaster wall. No small plaster wall, a Venetian plaster wall that some dude had Venetian plastered with his hands. I know because I bought the wall with the business that had the space before me. This Venetian plaster guy showed up one day to tell me I owed him some money. His hands were like meat mittens, fucking huge. I convinced him that I was not the droid he was looking for. Close one.

The best we can figure was that a young couple, who had dined on a tasting menu in a side room, had slowly loosened it throughout the evening, then at the very last minute they up and jacked it, right off of the wall.

I stared intently for some time at the wall the next day, trying to devise a theory. Then I realized that they must have timed the maneuver exactly right. They must have had an appropriate bag to store the sconce in. They had planned ahead. It is likely that the two of them had seen my sconces, had coveted my sconces and had conspired to steal one. And now my sconce is probably in their bathroom, and they look at it and smile — maybe they even show their friends.

It’s not my habit to walk the dining room during service, don’t want to be a buzz kill, all worked and shit, but I distinctly remember the couple. They were two of the mildest-mannered folks with the sweetest demure smiles you had ever seen, they looked as if they had walked straight out of a J Crew ad. There was no reason to be cautious — it's not like he had a beard or something suspicious. I bet they had some hot sex that night, probably with my sconce in their bed. Gross, they can keep it.