The War on Drugs' Dave Hartley Dislikes Pat's and Geno's

Share All sharing options for: The War on Drugs' Dave Hartley Dislikes Pat's and Geno's 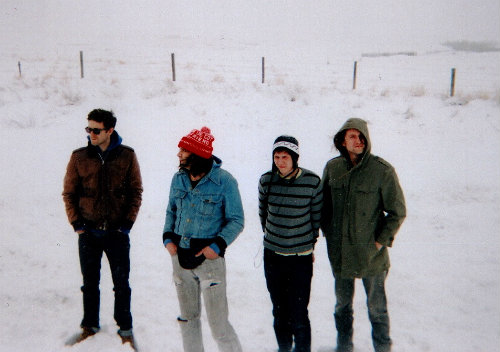 The Philly-based indie band The War on Drugs gained more than a bit of attention for their second release, "Slave Ambient," which critics universally hailed as one of the best albums of 2011. Not even the hard-to-please at Pitchfork could resist the band's updated Americana, issuing fawning and evocative praise when the record hit shelves: "They're the sort of band that believes the journey is more important than the destination. The songs don't necessarily end in a place very different from where they began, but through subtle sonic manipulations and layering... they give the impression that a great distance has been traveled."

As the band gears up for an extended tour, their bassist Dave Hartley got on the phone to chat about where he likes to eat in Philadelphia and on the road, and to explain why there's nothing worse than techno when you're trying to enjoy a meal.

What was the last good meal you had?
The last good meal I had was two nights ago at a place called Loco Pez, in Fishtown, which replaced the bar Crazy Fish. It's a block and a half from from my place. I had just gotten back from tour and ordered three al pastor tacos with barbacoa seasoning and pineapple and cilantro that were pretty slamming.

I think there's a lack of great Mexican food here in Philly, and lo and behold, they opened up exactly what I wanted: a Mexican spot with a pinball machine.

What about other places in Philly?
Another place that I'm very into is Johnny Brenda's, which is also a venue. It's got a gastropub kind of vibe, but they have some really great food that manages to not be pretentious. The gastropub thing is awesome, but it's hit saturation point. I just want good food at a good price.

The menu is always changing there, and they do stews in the winter and great soups.

So I sound like I actually do leave my neighborhood, I'm going to also plug Mercato. The few times a year that I really want a nice meal, I'll go there.

What kind of food do they serve?
It's kind of an Italian fusion thing vibe.

What about super Philly things?
I have to go on the record and say that I'm not a fan of cheesesteaks.

How come?
The culture around them is kind of lame. The whole Pat's and Geno's thing is so lame.

Want to elaborate on that?
Sure. First off, I don't think they taste good. I like junk food and am definitely not that health conscious, but it's just not great.

And then the vibe: meatheads standing in a line, being crass and loud, and then the whole xenophobic thing at Geno's, where they won't serve you unless you order in English. That whole culture doesn't appeal to me.

What about on tour: do you plan ahead or just eat whatever you can get your hands on?
We used to just eat lots of Subway and things like that, especially in the Midwest, where it's kind of your only option if you don't want to do burgers and fries all the time.

But now, we have a tour manager who is a total foodie. It's ridiculous, because he's taken us to some of the best places in every city we've gone to.

Where have you been?
We went to the Salt Lick barbecue spot in Austin. That's the only tour I've gained weight on.

The most memorable thing he's introduced us to, though, is a food truck I went to just outside of L.A. I was actually in a really bad mood, and it just wowed me. It was called Koji.

Yeah, the famous truck. What did you have?
I had the kimchi shortrib taco. Just next-level flavor combinations. I thought I was eating something superior. It was cooked beautifully, and the acid from the kimchi and the general sweetness and tartness and spiciness of it were great. I tried to find it again in L.A., but I tried an imitation which was not up to par. Execution is key, I suppose.

I kind of think we'll be splitting the difference in the future, since I'm just as happy eating out of necessity.

Do you pay attention to the music in restaurants or tune out?
I definitely pay attention. It bums me out when it's really aggressive. You know, I'm not opposed to hard rock or that kind of music, but I don't want to eat with that playing, since it influences the pacing of the meal. I've been on the verge of asking places to turn the music down or off before.

Techno is the other thing that I hate when I'm eating. I will never eat somewhere again if they play techno. It is just strange. The music should be conducive to conversation, not techno.

What's one of the most memorable meals you've ever had?
The one that comes to mind is this BYOB spot called Il Cantuccio, here in Philly. I had a meal the day after I had gotten back from tour. I missed my friends, I missed the city, and we went out there on a whim. The service was great, we hung out for ages and drank wine. It was the sort of thing where everyone was like, "You gotta try mine!" You left that dinner with that heady feeling where you're high off the meal.

Any last words?
I don't eat as much pork as it sounds like from this interview.