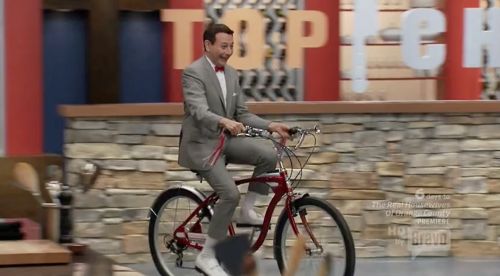 Last night, for not the first time this season, my DVR failed to fully record the new episode of Top Chef. It didn't skip it entirely, or pre-empt it for a House Hunters International; instead, it gave up after about fifteen minutes. After I missed the episode, I recorded the second taping at 11:30pm. That screwed up as well. This never happens with any of the other many television shows I watch. I think the universe, or at the very least Time Warner Cable, is trying to send me a message: give up.

It is saying something that my favorite part of the whole episode was the Luvs commercial that kept airing. Have you seen it? It is a cartoon competition where babies just straight FILL their diapers with waste, like a water balloon under the tap. What an apt metaphor this season. Which baby can make the most feces? It doesn't matter, because Luvs' new diapers have "HEAVY DOOTY BLOWOUT PROTECTION". I don't have a kid. What's a blowout? I no longer want a kid. All of this is to the tune of "POOP THERE IT IS". It's a magical thing, and Top Chef should considering bringing these ad wizards on board.

As we all know, last night's guest judge was Paul Reubens in character as Pee-Wee Herman. I love Pee-Wee. He was very important to me growing up. (I mean, he was important to me as I was growing up. I would have matured and gotten taller with or without him.) Knowing the week's secret word was a must for acceptance when I was a kid, and Large Marge from Pee-Wee's Big Adventure is responsible for more childhood nightmares than any other single movie character. I was very glad to see Pee-Wee on the show. Reality show lighting is not kind to him, and neither the judges nor the chefs knew what to make of a judge staying "in character", but nonetheless he was a delight.

Over 80,000 pancakes, by Sarah's estimation, greet the chefs in the Quickfire kitchen. 80,000? I think her eyes are bigger than her pancake-counting machine. (I have a t-shirt that says "It's Not a Bald Spot, It's Just a Solar Panel for My Pancake-Counting Machine.") (I am kidding, I am not bald. That's disgusting.) Pee-Wee loves pancakes, and the chef who makes his favorite will win five grand. "Wow, that's a stack," Pee-Wee says, referencing both how pancakes are served and how cash is organized. 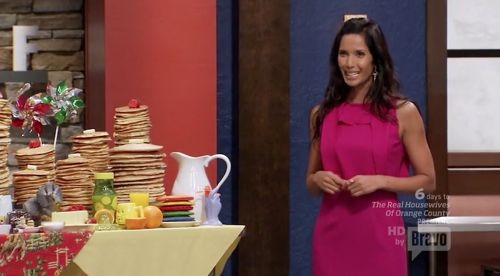 Strangely, everyone doesn't immediately rush to make a pancake breakfast in the shape of a smiley face. Have none of them seen Pee-Wee's Big Adventure? I don't remember lemon-ricotta anything in that movie. Paul does use liquid nitrogen to make champagne Dippin' Dots, which sounds pretty cool. Grayson makes her pancakes into the shape of Minnie Mouse's head. That is playful, Grayson. I think Pee-Wee would appreciate that. Does she put a bow on top? Why would she choose Minnie and not Mickey? The bow doesn't read as well in silhouette. I need to relax and not worry about it so much.

The idea of having somebody completely in character taste and judge food ten inches from your face sounds weird on paper, and it plays out just as weird on television. Pee-Wee makes odd faces as he tries everyone food, and as he goes through each of the five dishes, he repeats, "This is the best pancake I've ever had." The chefs struggle to react naturally. 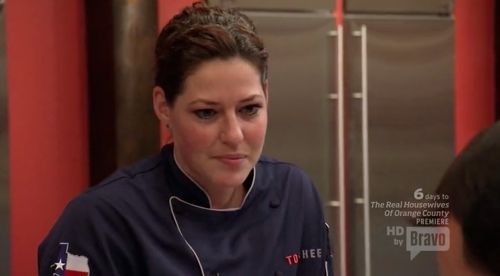 It also becomes clear that the Pee-Wee character does not allow Reubens to go negative. He doesn't announce his least favorite pancakes, only his favorite. Ed's favorite part of pancakes growing up was the little burnt bits that fall off and drip into the pan, and he makes a dish of those alongside blueberries, raspberries, strawberries, bacon and marshmallow. I would eat that! Ed, please come over and make that for me. When you're done, we can blow fat rails and stay up all night grinding our jaws and chatting about our dads and stuff. With five grand in your pocket, you're buying! 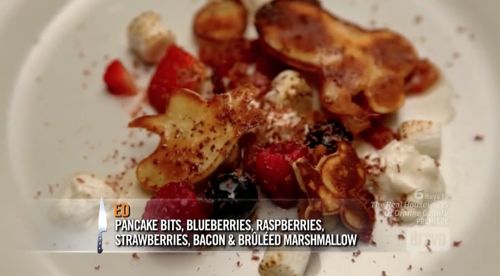 Pee-Wee has a present for all the chefs: his iconic red bicycle. His was once stolen and stashed in the basement of the Alamo. Pee-Wee went to get out, but he learned that "there's no basement in the Alamo!" A classic line. Ed laughs very hard and weird. 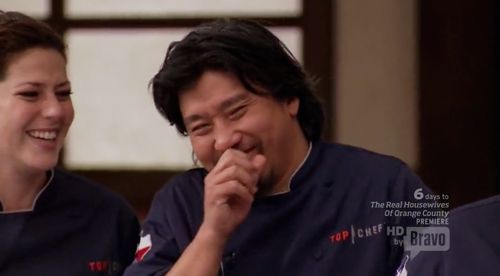 Each chefs gets a bike, and they've got three hours to bike around and scrounge for ingredients and a restaurant kitchen in which to work. They only have a hundred dollars to spend, and no more than one chef can be in a restaurant at a time. After that, they've got to make a family-style lunch for Pee-Wee at the Alamo. Bikes? Random restaurant kitchens? What IS this challenge? We are about three episodes from the finale. Don't some of these people have James Beard Awards? Grayson says it's tough, that "we could fall, we could not find a restaurant to cook in." Falling off a bike and not getting permission to borrow a burner are certainly two of the realest challenges, testing their real-world cooking abilities, a real chef could face. As Jacques Pepin once said, "Cooking is about technique, and technique is about repetition, and also make sure your helmet fits good and that your bike horn is trés loud beep-beep coming through!" 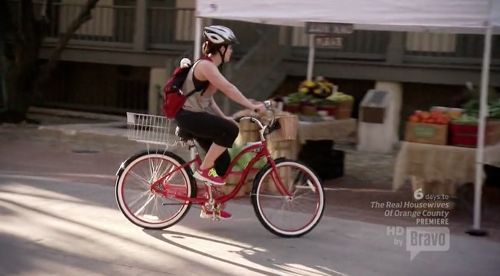 Armed with Pee-Wee's food preferences (chicken, egg salad, healthy, spicy, non-spicy, American and ethnic), the chefs ride to a farmer's market. Paul seems the most comfortable with a bike, riding his to work most days. He reveals a strange, stroke-like bike accident that leaves half his face red when he's drunk. Dude, you need to tap into your own supply wink wink. Sarah's uneasy on the red Schwinns. "We have old school brakes!" she cries. Like, bales of hay? A gaggle of Keystone cops?

When he can't find shrimp, Ed is overly confident whatever kitchen he finds will have what he needs.He ends up at a bed and breakfast, not the sort of restaurant kitchen you expect to be loaded down with shrimp. He would have better luck if his dish was Muffins & Grits, not Shrimp & Grits. (When I think bed & breakfast kitchens, I think of dense muffins.) He settles on chicken & grits. The bed and breakfast owners make him cook some over easy eggs for their own breakfast service, which is funny. I applaud them. 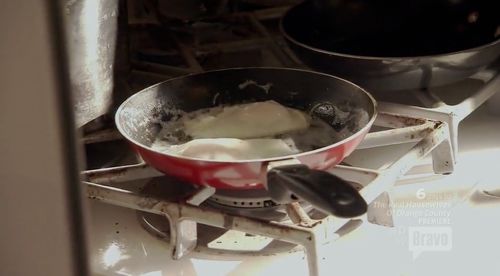 There is lots of horse-shitting around as the chefs "ask" the restaurants for permission to cook. "Hi I'm in a professional cooking competition, hence the bike helmet and face sweat, and I was wondering whether I could prep for a while in your restaurant?" Each and every restaurant agrees ALMOST as if the producers had gotten prior clearances from five and only five San Antonio restaurants. Of course I'm sure the chefs could have chosen any one of the thousand restaurants in the greater bike-able San Antonio area, but luckily they chose restaurants that are surprisingly chill about having a camera crew and sweaty stranger inside them. Is San Antonio a notoriously relaxed city? I feel like that's not what I've heard about it.

Having relied on strangers for help and pantry supplies, the chefs ride their dishes to the Alamo in another embarrassing bicycle montage. They serve their lunches for Padma, Tom, Gail and Pee-Wee. Pee-Wee is still in character, and everyone still struggles with it. When Tom says, "I agree with Pee-Wee," Pee-Wee quips back, "I bet you didn't think you'd be saying 'I agree with Pee-Wee' today." Why's that, Pee-Wee? Considering you are judging food alongside Tom, I think that's entirely within the realm of things Tom expected to say today. 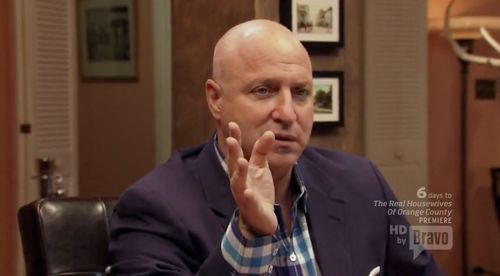 The chefs lay out their dishes, and they look amazing. There is a lot of chicken and eggs and things, but that is what Pee-Wee asked for. Sarah puts a spin on a traditional egg salad, serving soft-boiled eggs with a summer vegetable salad and chicken skin vinaigrette. Grayson stuffs a chicken breast with an egg yolk, something I've never seen before for good reasons, and she serves it along a butternut squash and tomato salad. Lindsay puts braised beef checks in a zucchini boat. Ed makes his chicken and grits with raw corn, kale salad and a red eye gravy. Paul made roast chicken with a red curry gastrique. I'd eat all of those things, but I don't get to.

After the service, the chefs stew in the stew room. There is lots of empty talk about camaraderie. Lindsay says, "I always joke that chefs are like traveling vagabonds," which is just a great, strong joke. Ed says it was an honor to cook alongside everyone. When Padma calls all five in, Sarah says, "We stand as one." Yes, you have been the very model about unity this entire season, Sarah. You are the fourth Musketeer.

Only five chefs remain, and they're all strong, so elimination comes down to nit-picking. Lindsay's salad was soggy and overdressed. Paul's curry was overly sweet. Ed's chicken may have been slightly undercooked, leading to an odd, rubbery texture. Paul hates tomatoes and butternut squash, and Sarah's medium-boiled eggs were oddly under seasoned.

Pee-Wee gets to pick the winner, and he surprises even the chefs when he calls out Lindsay's zucchini boats. Stuffed zucchini was the first thing Tom ever cooked himself, and it holds a special place in his heart. This is Lindsay's first individual Elimination win. Paul also finds out he's safe. 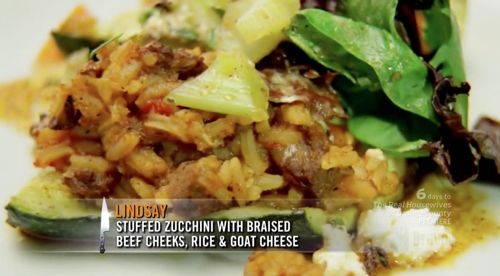 It's down to Sarah, Grayson, and Ed. Maybe Sarah will step forward and suggest they all go home, in a display of team loyalty. Whoops she totally forgot to suggest that. Instead we found out just how MUCH Tom hates cold tomatoes together with squash, and Grayson is sent packing. Earlier, Grayson said that she's extremely competitive, and that game night in her household always meant someone broke down and cried. I think that means your family is emotionally fragile, not competitive, but either way she's not done yet. 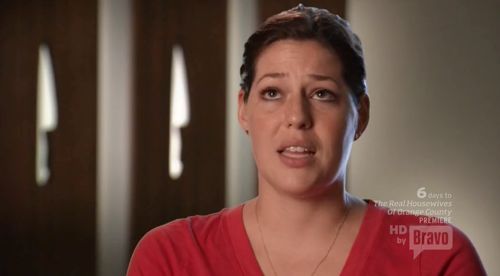 "Last night" was the final Last Chance Kitchen, with Grayson facing off against Beverly. The winner will rejoin the show next week. Oh you thought we were already down to just four? Incorrect; this season has found yet another way to stretch things out. Last Chance Kitchen doesn't even do us the service of telling who will rejoin, so we'll have to tune in next week to see if Beverly or Grayson returns. Let's "hope" my DVR doesn't "forget" to record it again. We're in the home stretch.