Share All sharing options for: How to Get a Table at é by José Andrés in Las Vegas 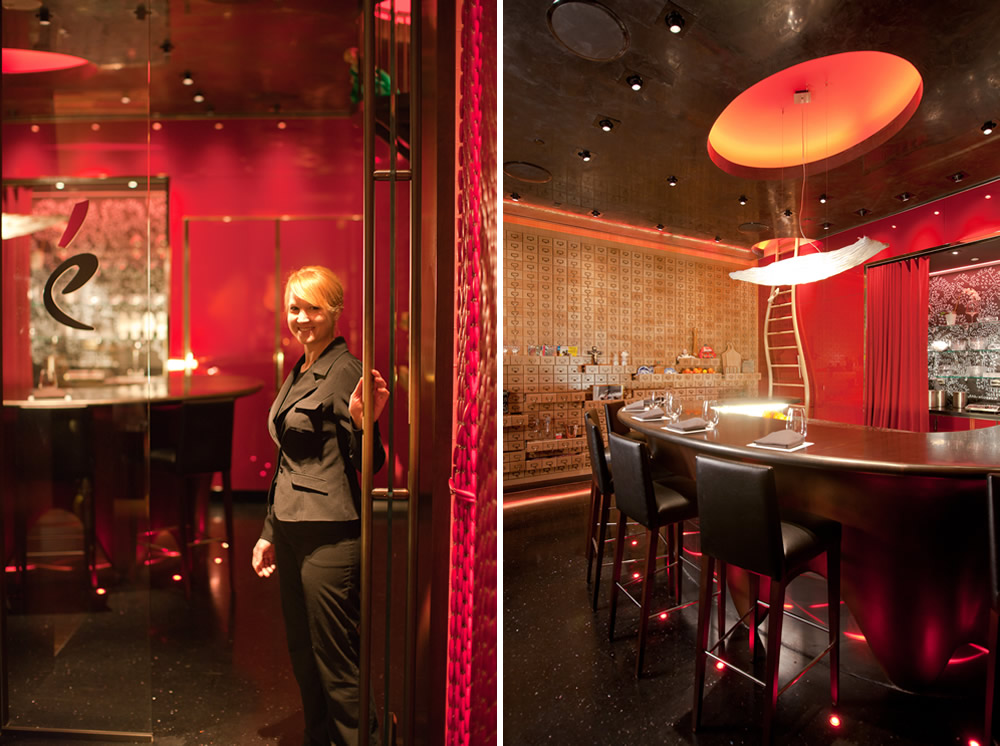 é is one of three restaurants from the prolific chef and restaurateur José Andrés — the others are SAAM in Los Angeles and Minibar in Washington, DC — that could be called an exclusive, intimate experience. Housed within the larger Jaleo restaurant in the Cosmopolitan Hotel, it is an eight-seat bar in which a team of chefs crafts a progressive menu that often exceeds twenty courses. Not surprisingly, it is a bit difficult to nab one of those spots. Here, general manager Michael Ploetz discusses the best ways to get in, and José Andrés talks about the philosophy behind the restaurant.

Can you run us through your reservations system?
Our reservation process seems complicated but it's actually very simple. We take reservations by e-mail a month from the date, at 12 AM PST. They are taken in the order that they are received.

How long does it take to get a response?
Typically, we tend to get back to people within 48 hours. Our reservations desk is manned five days a week and is closed on Mondays and Tuesdays. It's all democratic in that it has to do with order and the date, quite simply.

How many requests are you getting?
These last three months, we've seen the reservations volume increase quite rapidly. Now, we seem to be booking up a day completely within ten days of it opening up. Typically, a day is filled a week to ten days from then. We receive many inquiries throughout the month for that date, usually, and we try to work with people's travel arrangements here in Vegas.

In other words, if the guest gives the restaurant a range of dates, you'll work with them?
Correct. It can be a bit of a back and forth with guests. If a guest asks for a particular date and we don't have availability, we'll propose certain other times and see if we can work something out. People will often send us all the dates that they are coming in, and we try to work it out. We usually come to a resolution, despite how small the restaurant is.

And why is it only one month out, as opposed to other exclusive restaurants that have larger windows?
That was José's vision. If it's three months out or something like that, the reservations get taken up right away. That's the case for a place like Next, in Chicago, for example. We try to limit that a bit so that people don't have to plan so wildly. I do think that the people that want to get in can get in and don't have to plan ahead so much.

Why e-mail?
When we opened the restaurant here — Minibar is the closest comparison — we very much did it organically. We didn't do any press, and very much we wanted it to grow organically. We wanted the guests to spread the word, and that was José's idea. So, with that, the decision was made to do things by e-mail so that we could interact with guests and knowing that people would be planning ahead. We wanted to develop a relationship through e-mail and have a little bit more of a dialogue.

From the operations side, it was also so we could track all the communications and have a record of all the guests that have been with us. In the beginning, though, it was about considering what was best for the Vegas market. I don't know if it will always stay this way, but for now, it's a democratic system.

You may abandon e-mail?
There are some other ideas we are thinking about, but for now, this is what is working best. It's a lot better to receive an e-mail and thoughtfully respond, as opposed to a phone call, where it becomes somewhat more difficult on the fly. We're thinking about how to build on that in the future.

Do you ever take a walk-in?
Good question. There are rare circumstances where people are sick or they've overindulged in Vegas, and for the most part, that results with one opening or so at the bar. We have had a few of those instances, so we do once in a while have a seat or so that is open. It can be hard to get a single diner to fill that seat. The challenge, however, is that the menu is fixed and we need to account for allergies and preferences. All these dishes are approved by José, whether they are regularly featured or substitutions. For instance, tonight (Valentine's Day), there are a couple of seats full. But, for the most part, we are about 98% full.

What is the wait list policy?
We do keep track of people that we turn away on the e-mail systems. So, if someone doesn't get back to us to confirm a reservation in the 48-hour window that we give them or asks to be put on a wait list, we will do so and approach it in a democratic, orderly way.

Finally, can you give a succinct answer to this: what, in your view, is the best way to get into the restaurant?
The best way is very simple: at 12 AM PST, one month away from the date you are wishing to dine, send us an e-mail and there is a very good chance you will get in. It's even better when you send us a window of dates so that we can work with you. 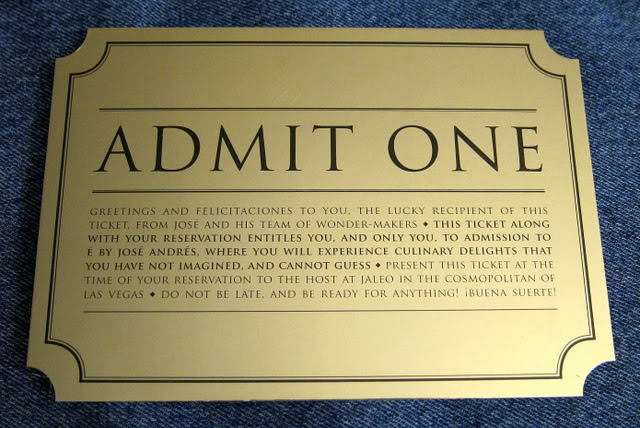 Eater: I wanted to have you reflect a bit on the notion of exclusivity, which you touched on in an earlier interview with us.
I would love it if é were a bigger restaurant, and the same goes for SAAM and Minibar. But what I do there does not allow for it. I say it as modestly as I can — I really wish I could.

The only thing I like about its exclusivity, quite frankly, is that people tend to enjoy it much more once they get there. The good thing about this is that it gives it a certain value and creates excitement, but the problem of course is that you have to meet expectations that can be unbelievably high. I don't worry about that so much, since we make sure to put lots of care and love into it.

You send guests a golden ticket that lists a show time before they visit. Do you view restaurants like this as theater?
I think that restaurants like é and Minibar are places that you in some ways prepare to dine at. elBulli was like that in its moment, and so is Grant Achatz's Alinea. That's a nice thing, the notion that you plan before you go.

I honestly do believe that restaurants are the entertainment industry of the 21st century, and that going to dinner is like going to see a play or show. The guest in many ways is an actor and the restaurant is the stage. That's very important to consider when you and your chefs are putting so much care into your work. It's very important, because without the guests, there is no dialogue. And then there is the food, which is the storyline.

I've always been a fan of Willy Wonka, and this is really my little chocolate factory where people can come and try our creations, which are made with great love and attention. It's not something we decide to put together the day of at 6 PM. I want people to come in hoping to experience a bit of wonder, and that's why we have the golden ticket.

In other words, you don't want this to be and in-and-out experience where someone just comes in and gets fed.
You know, I'm open, and everyone can think what they want. But I do think that cooking in certain circumstances is like going to see your favorite band. You can listen to something in the car, you can listen to something on your iPod, but there's nothing like listening to it and seeing it made live. I want to work more than anything at having people come in with an open mind, with a desire to enjoy, and with a bit of the mentality they do when they might see a show.