Top Chef Texas Episode 15: Don't Point That Gun at Me Unless You Plan to Use It

Share All sharing options for: Top Chef Texas Episode 15: Don't Point That Gun at Me Unless You Plan to Use It 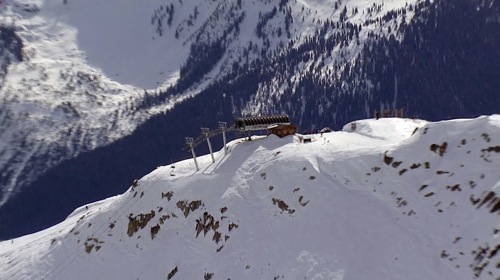 If you thought that a setting change would speed up the interminable funeral march toward this season's end, your thoughts were very wrong. Having milked Texas's tourism councils for as much money as they could spare, Bravo has headed north to British Columbia, taking some extra government funds in exchange for Tom and Padma saying "British Columbia" 500 times during each of the finale's nine hours. Whistler looks like a very pretty place, but it's light on kitchens, and all that makes for a pre-finale that is surprisingly focused on gimmicks. Bravo, these guys have slogged through so many hours of bullshit reality hijinks, so can we please watch them cook now? No, we can't? Alright.

Sarah, Paul, Lindsay and Beverly are all that remains of Top Chef Texas' starting roster of 47 chefs. They've had time between when filming stopped in Texas and began in British Columbia. Sarah is a changed woman. "My goal is to stay calm and be a really nice person." That statement lasts about as long as it takes to drag her ass inside the minivan. Paul asks Beverly about Last Chance Kitchen. She says, "It was totally awesome--" before Sarah snaps, "Look at that tree!" and points out the window. What a jerk. I get that everyone resents Beverly being eliminated once and then having a second chance. Also, I get that Beverly is very odd, and I know how grating it can be to listen to an annoying person tell a story when you can't stand them, but Sarah is on television. If she can't bite her tongue and let Beverly give a ten second soundbite, she should climb up said tree and then jump off the top of it. 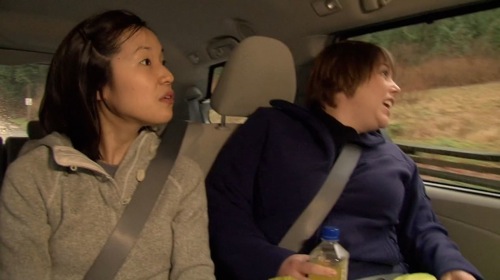 Meanwhile, Lindsay confuses me with how she pronounces "Paul, Sarah, and I." I literally think she says, "Paul's hair and I have a special bond." Tell me more, girl. I bet you'd have an even stronger bond with Paul's hair if he had a mane like his great grandfather, who we learn was the Don Draper of his time. 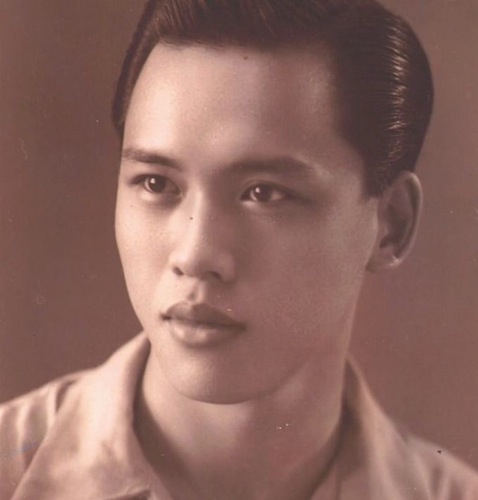 The chefs take a gondola lift to the top of the mountain. (The difference between a gondola lift and a regular gondola is that one is for rich people who ski, and the other is for rich people who like Italian food.) They're greeted by Padma and Tom. Padma and Tom struggle to stand upright in the wind, and Padma struggles to look like a normal person in the pants she chooses to wear. Are they bulletproof pants? The preview for this episode promised guns; someone shoot her in the leg as an "experiment." 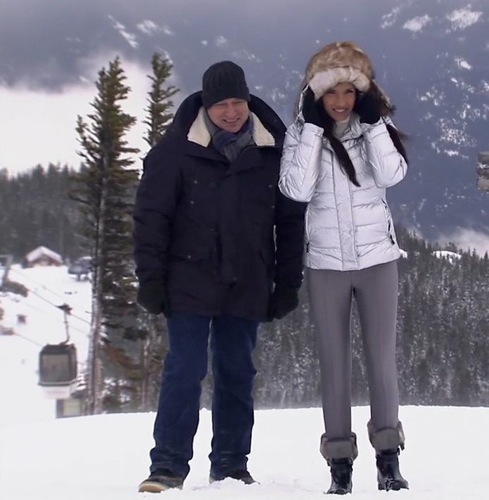 This episode's three challenges are worth ten grand. The winner of each will find themselves holding a pass to the finals (isn't this the finals?) and spared from the subsequent challenges. Maybe each challenge requires them to cook increasingly elaborate and carefully considered fine dining meals. Or maybe they will have to make castle-shaped crowns out of lunchmeat and balance across a tight rope like they're on a Japanese game show. Their first challenge is to create a dish in a moving gondola. That sounds complicated enough, but halfway through their trip, they have to rush and pick out an extra ingredient from a table. They have 22 minutes. What is going on? This is like one of those drinking games you play as a teenager where you have to chug a beer and then spin around a baseball bat three times. It serves no practical purpose and exists only to eat up the minutes of your life and eventually fill you with regret. Just like watching this show. The chefs dink around in their tiny gondolas filled with hot plates and ingredients. They awkwardly narrate what they're doing to the cameraman with whom they are sharing a lift ride. They are already embarrassed to be doing this during the finals, and it shows on their faces. 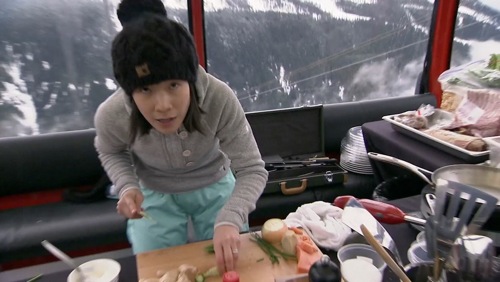 All four chefs are nauseous: Paul because of motion sickness, Beverly because of her fear of heights, and Sarah and Lindsay because of their new haircuts. Do these gondola lifts normally have mini-kitchens in them? Is that very popular in Whistler, British Columbia? I will be honest: I have never skied, so maybe people love deglazing chorizo with prune juice on their way back up the slopes. "What's the salmon belly situation in our gondola lift?" That is a question skiers frequently ask before booking their lift tickets. Lindsay's secret ingredient is her new earrings. 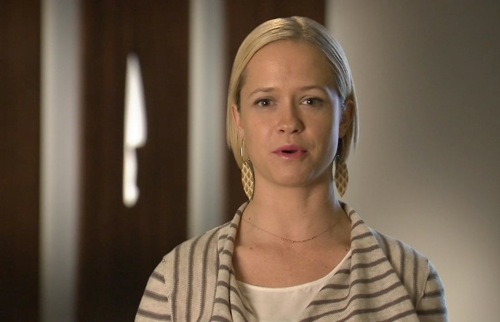 The chefs serve their space food to Gail, Padma, Tom, and an Olympian named Gretchen Bleiler. Whoa, how'd you guys get Bleiler? Sweet booking. Did the Winter Olympics pay for this episode? Paul lands on the bottom with a lamb loin with curried mushrooms and wasabi creme fraiche. Sarah's dish is in third, a prune juice chorizo sausage with pickled mushrooms. Lindsay forgot to make enough salmon for all the judges, but in a stroke of genius she halves all the portions of her seared salmon.. This one's got a gift. Beverly makes a salmon tartare. Does anything sound nicer than some raw salmon on an icy day, fished straight from a frozen lake?

The judges admit they have a tough time deciding, because everyone did so well. Or is it because everyone looks like they are in the Aspen scenes from Dumb and Dumber? The judges silently pass pieces of paper back and forth while the chefs stand and wait What? Can they not ask the chefs to leave for a minute? What do the notes say? "Hey Gretchen, what sport d u do 4 the olympix?" The notes say that Lindsay is the winner. She gets ten grand and a pass to the final. 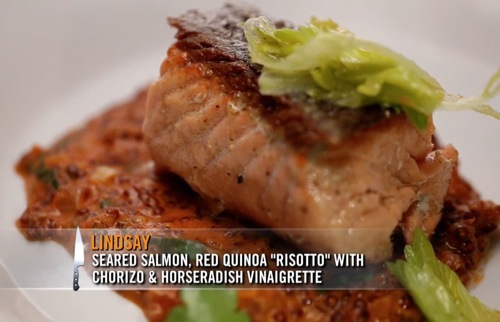 Up next is a giant ice sculpture. There are a bunch of giant blocks of ice filled with frozen ingredients. That will be their pantry. Neat. This is all just so nice. Is there anything more magical than a block of ice? What a winter wonderland. Hand me a Turkish delight and I'll hop into your sleigh. 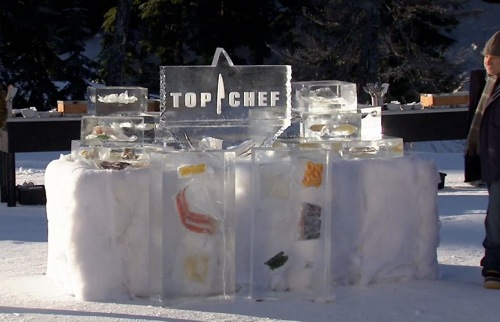 Tom makes a speech about how sometimes fresh food isn't available, and all you have is frozen food. He lamely defends flash-freezing. "But it's just about good food." Honestly, Tom? I'd need to take off my shoes to count the number of contestants who've gone home because they substituted a non-fresh ingredient and got punished for it. It must be hard to now make a challenge out of this. Also, Beverly, Paul, and Sarah will have to chop the ice with ice picks themselves. Very practical. Beverly is obviously a psycho about it. She's lucky she didn't lose a finger. I bet she's amazing at that knife game, Five Finger Fillet. 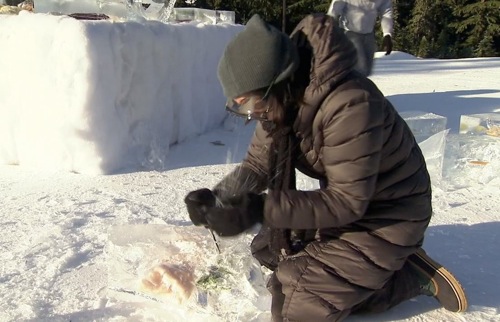 Sarah freezes her ass off, while Paul somehow manages to look casual and warm in just a sweater. Throw on a coat, hotshot. He helps everyone ice pick ingredients out, because he's got extra time. He says, "This challenge is about the food, not the ice blocks you can chop." Sure, Paul, but it's also kind of really about the ice blocks you can chop. He wins with a poached king crab, toasted almonds, mango chutney, and orange marmalade. The judge is Jon Montgomery, a Canadian Olympic gold medalist in Skeleton. I've never heard of that sport and I'm not at all ashamed. 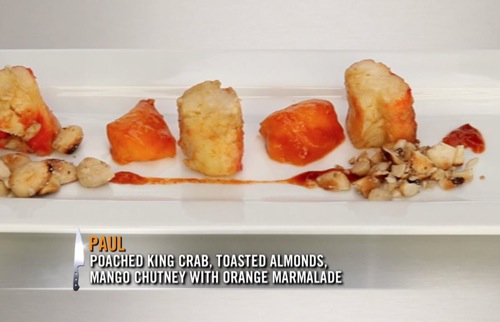 The final spot comes down to Beverly and Sarah. And the challenge involves guns! Padma greets the two remaining chefs and tells them to RUN. They have five minutes before she gets on her snowmobile and starts hunting them. Bev is the most dangerous game of all. 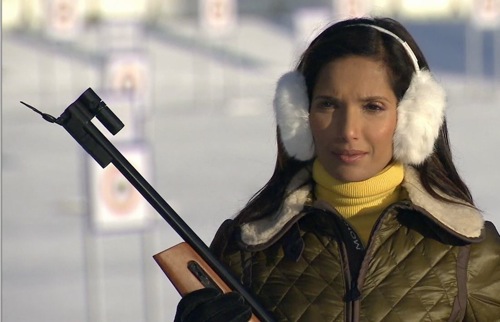 In fact, there's going to be a biathlon. Which one is a biathlon? Is that where you ride a horse and then throw a disc through a hoop? I can never remember. Oh it's the one where you cross country ski about 200 feet then come back and fire a gun at the ingredients you want. We never see it, but I can only imagine how closely security dudes watch Beverly after they hand her the rifle. She could really end things real quick here. Luckily, Sarah and Beverly are too tired from their skiing to cause any real damage. All they do is shuffle and fall, shuffle and fall. Sarah gets snot on her face. 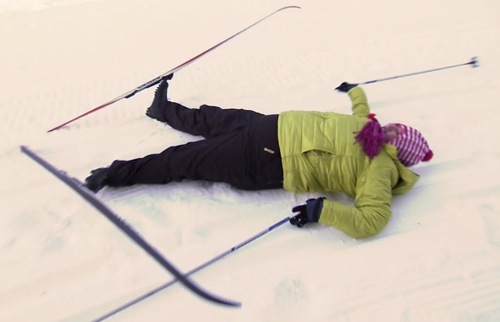 Beverly nails her arctic char and beet and truffle targets. Sarah is furious. Her dad would be so disappointed in her, because he used to take her shooting, and also because of the way she treats other human beings. Sarah gets her rabbit and cherries. 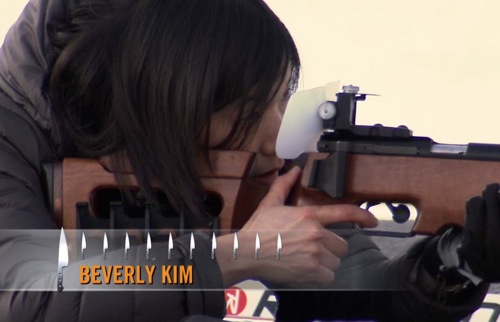 They finally get into a real kitchen to cook, and the tension between them as dissipated as they get this close to the end. Beverly is without her pantry standbys like coconut milk and lemon grass. She serves a slow roasted arctic char, onion and beet compote, celery root truffle puree, and a shaved fennel salad. 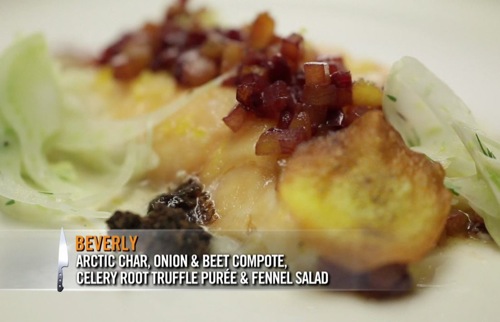 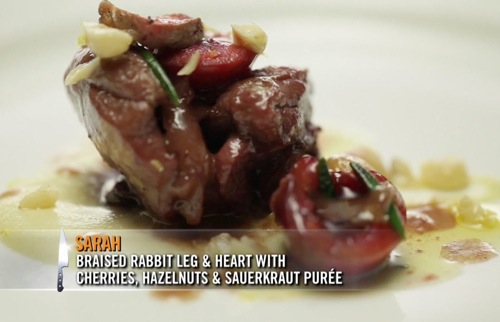 The judges like both dishes, and Tom gives each contestant an opportunity to explain themselves, or a rope with which to hang themselves. Beverly's celery root didn't quite work, and Sarah's leg was a tad tough. Sadly, Beverly must feel the indignity of being eliminated a second time. She's packing her knives and leaving. Sarah hugs her and says lots of empty things about how great it was to cook with her. You are too kind, Sarah. Charmed, I'm sure. Beverly's the best, and I hope she never lets anyone tell her otherwise. 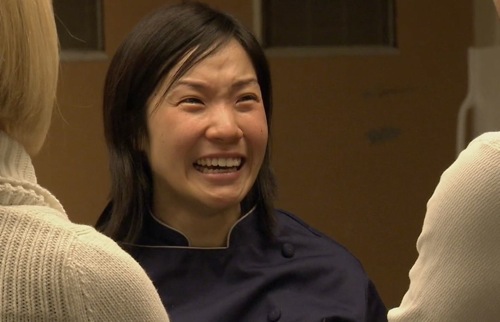 And now we're down to three contestants. Is next week the finale? It's unclear. I imagine this season will go on forever, outliving us all.