Share All sharing options for: Chef Tory McPhail on Cookbooks as Time Machines

Welcome to The Cookbook Shelf, in which Eater talks to all manner of food professionals about their book collections. Warning: serious book nerdery ahead. 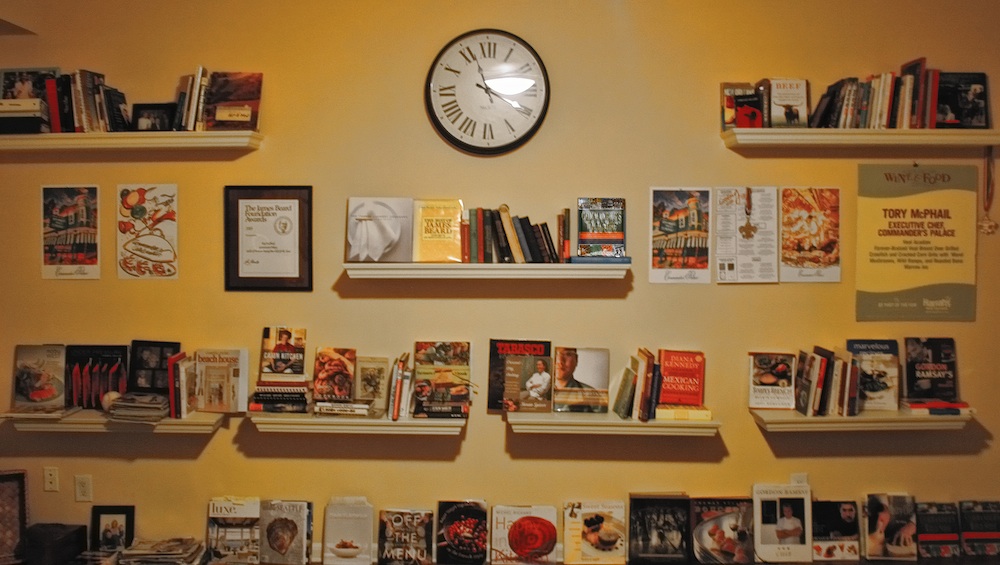 Tory McPhail is the Executive Chef at New Orleans restaurant Commander's Palace, which was built in 1880 and is one of the oldest restaurants in the country. Below, McPhail talks about how his favorite cookbooks are portals through time, the best books for really digging into the (very different) cuisines of Cajun and Creole food, and the time an Emeril Lagasse cookbook changed the entire course of his life.

So let's talk cookbooks.
I have hundreds and hundreds of cookbooks. No, literally, hundreds and hundreds. I've got half at my house and half at the restaurant. The half at the house is probably more important to me because they're special, they're very personal. The ones at the restaurant are more like textbooks, like from the CIA. You know, I need a go-to puff pastry recipe, boom there it is.

The ones I have at the house are much more inspirational: how food used to be, the philosophy of food, the food a particular culture might have, and how different it is today. For me it's kind of interesting to connect the dots between the two, the food of the past and food of right now. It gives me a better insight on where food might go.

What's an example of a great old cookbook, for perspective?
My favorite cookbook is from 1890, it's called the Compendium of Cookery and Reliable Recipes (available in full online). I actually received it as a gift. It kind of set my fire to start collecting antique cookbooks. A guest came into the restaurant, and she was talking to me, trying to understand where I was coming from, what I'm interested in. And I said well, I'd really like to have a better understanding of the culture of Louisiana and all these fabulous foods. So we finish the conversation, and she leaves, we shake hands, and then next thing I know I get this box in the mail. She had sent me this beautiful antique cookbook, and she sent a note that said "My experience at Commander's was so great and I think you might like this book."

It not only encompasses Louisiana food, it encompasses American food of the late 1800s. It's not necessarily the recipes that I'm looking for, it's the feeling of the recipes. Simple ingredients put together in a good way where it's more family oriented. It's just simple stuff, three or four ingredients. Like how to make a quail stew: onions, garlic, celery, add the quail in, add water, boil it. It doesn't give you any idea of how much salt to add or how long to boil the thing, it just says "Boil it down until tender." Cooking back then, it wasn't about exact recipes, it was about passing down recipes from generations, an and generations. Hopefully your children will eat a little bit better than you. Life was about making sure the farm ended up better than when you found it. It was more of a family thing. It wasn't about restaurants, it wasn't about plated food. It was more about good dishes you could do in volume with some speed. Feed ten or fifteen people. And the biggest difference was, well, how much rice are we going to add to the pot?

And that's what I get out of it: basic ingredients this part of the country really grew up on. So how about we take those ingredients, move them around a little bit, understand the history behind them, and reinvent them to something that's very modern and fun for our guests.

Anything else that's particularly old or rare?
I've got one book from 1938 that's the most unusual book I've ever known. It's called The Modern Meal Maker by Martha Meade. It's very unusual because the book itself is rectangle in shape and it's spiral-bound at the top, and you just flip the first section over and it says "Spring and Summer." And then you flip through the recipes, they go through the months, so April, May, June, July, August, September, October. So as you go the recipes become different, like you're flipping pages on a calendar, and find out what Martha Meade really cooked. So like catfish with fresh haricot verte from the farm, or fresh berries for dessert, and that is what she was eating around that particularly time back in 1938. Then heading into the Fall, obviously the recipes differ. You're getting into the wild game, you're getting into the duck and richer flavors. The cool thing is once Fall ends, you flip the book over and go back into Winter on the opposite sides of the pages.

And talk about a time portal from February 2012 all the way back to 1938. To understand this woman's psychology, of how she puts food on the table for her family? She just lays the whole thing out in four seasons, but also it's done in a really interesting manner. I think it's just brilliant.

What books do you think get at the heart of Louisiana cooking?
Well, I think the best example of that is John Folse. He's a great guy, a great, local, Louisiana chef. He was born and raised in Louisiana, and he just has all these great recipes from across the Louisiana coast and he brought them together in probably, shoot, ten cookbooks. So if somebody really wants to understand Louisiana food, definitely go to John Folse.

He's got an extensive library. One is called The Encyclopedia of Cajun & Creole Cuisine, they are shockingly different. A lot of chefs just kind of lump them together but they're really not the same. He's got a book on wild game [After the Hunt - Louisiana's Authoritative Collection of Wild Game & Game Fish Cookery], which I'm all about. And on the cover he's got an alligator slung over his shoulder and he's just cruising down a dock, just on an afternoon hunt. That's pretty cool. And he has another one called Hooks, Lies, & Alibis. It basically documents the movers and shakers of the Gulf Coast, we're actually featured in there as the King of Louisiana Seafood.

You work for one of the oldest restaurants in the country, and while I know that there have been several cookbooks produced over the years, I was wondering if there were any internal records of the food and how it's evolved.
Yeah, there actually is. The computers have a huge archive of recipes that span probably twenty years. Jamie Shannon, the previous chef, was a very dear friend of mine, and he was the one who started introducing a bunch of his recipes to the database. So when food writers needed a recipe, they'd call up and be like hey look, I really want the recipe for crawfish maque choux. And it's just boom, here you go. And since then we have strategically added to the whole thing, just kind of followed in his footsteps, making sure all the original recipes are accessible.

What cookbooks would you say have inspired you as a chef?
I'm going to be honest with you: one of my favorite cookbooks is Emeril Lagasse's first cookbook [Emeril's New New Orleans Cooking ], published in about 1993. When I was 17, 18 years old, I was living in Seattle, Washington, just finishing culinary school, and I was always the kid in high school who got like straight C's. You know, hanging out, partying, and I was in a band, having too much, ah, extracurricular activities. So I finally got into culinary school, I enrolled when I was 16 actually, and I got straight A's. I graduated at the top of my class, and the chef instructors were like, wow, obviously you're talented, what is it your truly want to do? And I said, well, I definitely want to cook because food is my passion, what do you think I should do? So they told me you only have two options: you can either go to New York City and cook in all the great restaurants or you can go to New Orleans and understand the best regional food in America, understand the roots of what cooking is really all about in the United States. But that's it.

And I was like man, I graduated at the top of my class and I only have two options in life? But I said okay, it sounds like New Orleans for me, and they told me to check out this no-name chef from New Orleans, his name is Emeril. He just wrote a great cookbook. So I went to the bookstore that day, and booked plane tickets to New Orleans. So I got Emeril Lagasse's cookbook, read the whole thing, and thought wow, this is just so crazy, so wildly different than anything I've ever known. I bought the book, studied it every day, had it on the plane with me. I actually had it in my hands on the plane from Seattle to New Orleans. And eventually, as luck would have it, I came to New Orleans, worked my tail off, and eventually took his job as the Executive Chef at Commander's Palace.