To thoroughly enjoy the glory that is Top Chef Seattle, we welcome comedian Max Silvestri, who will be here every week to take us through the season. 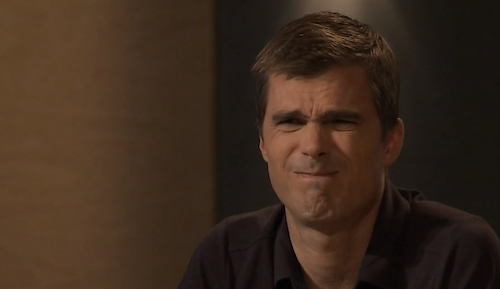 The fifth episode of Top Chef: Seattle felt like The Dark Knight Rises of cooking competition shows. As the once chipper Stefan confronts the inevitable doom of his 40th birthday, exhausted, pale contestants cooked miserable food under the sad grey light of the overcast Seattle sky, only to be berated by Tom for their inability to turn truffled popcorn into a satisfying lunch. Padma dressed like one of the Droogs in A Clockwork Orange; off-camera she probably forces Gail's eyelids open and makes her watch hours of her appearances on the Home Shopping Network. The whole thing left me feeling pretty bleak about life. Because this was the episode Bravo deserves, but not the one it needs right now. 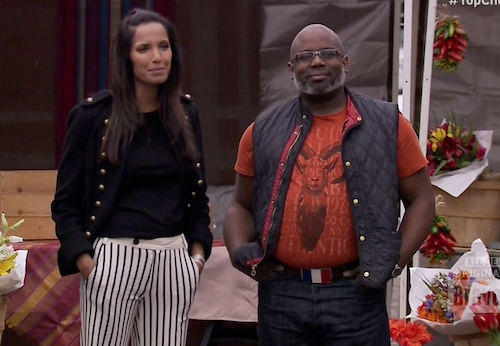 Though 14 going on 30 chefs remain, Stefan feels his time has come. He turned 40 this episode, and on his season people kept getting eliminated on or around their own birthday. It's that famous Top Chef birthday curse, one put on all the contestants after Harold Dieterle ran over an old gypsy with his car and then the gypsy's daughter pointed at him and yelled, "Knife packer! Knife packer!" If you are curious, that was a really overwrought reference to the movie Thinner. Please watch it on Netflix to learn more.

The chefs head to Seattle's Pike Place Market, which is famous because David from the Real World worked there and also they throw fish. Newspaper was originally invented to catch fish but then they were like, "Why don't we write what happened on these here fish catchers?" And that is why the New York Times is called the Gray Lady, because all fish is gray. Padma introduces the contestants to Daisley Gordon, a renowned Seattle restaurateur now also renowned in my household for wearing surprisingly tight t-shirts. The vendors at the Pike Place Market often start work there before dawn, and we are told they work up quite an appetite. The chefs are to form teams of two and cook the vendors an easy-to-eat breakfast, one that fits on a stick. Since when are things on a stick easy to eat? Things on a stick are notoriously difficult to eat. It's unclear whether you are supposed to get your hands sticky by pulling the food off first or just sticking the whole thing in your mouth and risking piercing your esophagus. Even a simple one-bite thing like a Starbucks cake pop usually requires me to put down butcher paper on the ground first and then put a paper towel over my mouth while I eat it so no one can see how disgusting I am.

The episode's icks begin when the chefs forming into teams themselves. It feels like the bad part of summer camp, and even after only a week or so together in this house it's clear how many of the chefs don't get along. Lizzie is uncomfortable with Danyele because Danyele says "interwebs" and "epic fail" every other sentence, presumably, and Josie doesn't say why she doesn't get along with Eliza, but I bet it has something to do with how Eliza followed Widespread Panic on tour and made vegan sushi in the parking lot. Are you kidding me? Eliza must be so chill. Josie says, "Do you know the recipe for ricotta pancakes?" and Eliza's like, "Totally. Step 1: twist one up. Step 2. get hella' mellow. Step 3: put some Cheese on (as in the Stringcheese Incident) and turn. It. Up." 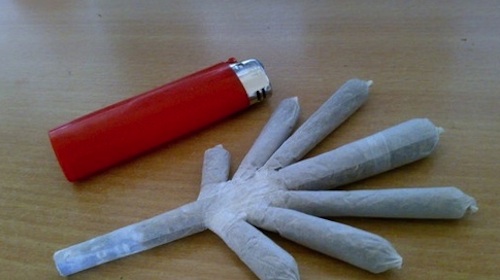 The chefs have an hour to prepare their breakfasts, and part of their challenge is that they have to get electric cooking gear from Sur La Table to cook with. Obviously, Top Chef could have just set them up with grills and hot plates, but instead they scramble around an empty cooking supply store and carry out free panini presses, which is what we are all here to see. Eliza found a hemp place mat in the decor section of Sur La Table and disappears for fifteen minutes. CJ is not pleased to be paired with Tyler, whom he sees as an over-eager and under-creative Coach-like figure. I am talking about a generic coach here, not the Craig T. Nelson sitcom, though if I was talking about the Craig T. Nelson sitcom, Tyler is absolutely a Dauber. 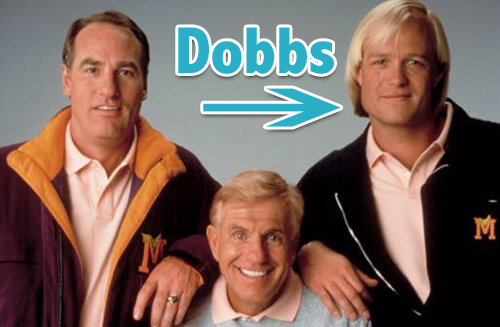 Daisley, who has a name let's all agree to keep pretending is normal, picks his least favorite dishes. Danyele and Lizzie made summer berries with crispy pancetta, but it was not substantial enough or a good enough use of their time. Josie and Eliza made a ricotta raspberry pancake thing, but Daisley didn't like how it was served in a hollowed out cherry-flavored cigar. Josh and John, who have dramatically put aside their minor, uninteresting differences to dramatically work together, served chilaquiles on a stick, and Daisley loved these mini breakfast tacos. His favorite, though, belonged to Bart and Sheldon's green forest breakfast sandwich, which was delicious and easy to eat despite their grill problems. They win immunity, and Sheldon says, "It feels good to get one under the belt." That is what Stefan is always saying, Sheldon. Nothing feels better. 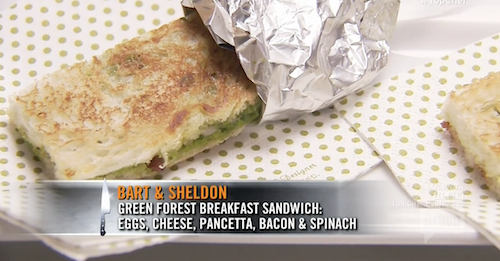 Breakfast and sticks and satisfied vendors are all in good fun, but now things get dark. Pike Place is also a farmers market, and as you know, farmers markets are full of "artisans." Each team has two hours to cook a lunch highlighting a different Pike Place artisan ingredient. Now the word "artisan" can mean a lot of things: it can be someone who has spent half a lifetime perfecting the crafting of bread or knife-making, for example, or it can be someone with a mommy blog who spends every other Saturday afternoon filling cute jars with unusual horse shit only appropriate as a thoughtless gift from and for jerks. Sadly, most of the ingredients our competitors must use in this Elimination Challenge, one worth ten grand, fall into that latter category. This whole thing would be more appropriate for a Quickfire, where they've got twenty minutes and who cares if they make a bad Reese's Pieces ravioli, but to serve an elegant lunch that highlights bagged truffled popcorn, a food Tom wouldn't let through the back door of his restaurant, is embarrassing for everyone, including me. My embarrassment reaches a fever pitch when Padma raises her glass and says, "I'd like to propose a toast. Long live the artisan." I am wincing just writing it. "Long live the artisan." 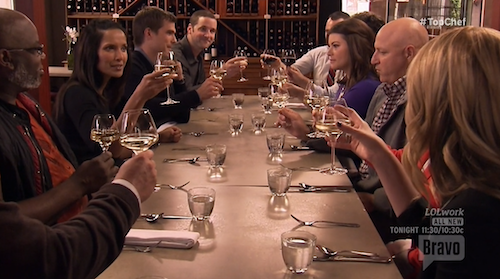 I am not going to spend a lot of time on the food cooked, because it's bad. Stefan and Brooke, though their personalities click more than many of the other teams, jam their cloyingly-sweet rose petal jelly into a glazed duck with cabbage. Josh and John both think the other one is an idiot but they are polite. They cook truffled popcorn grits that apparently taste as gross as it sounds. Micah and Kristen are at least blessed with cheese curds as their ingredient, but they hide it and fry it and force Padma to practically woof the phrase, "I LOVE CHEESE!" and yet she still hates this dish. Sheldon and Bart make a salad with their candied salmon, which definitely sounds like a treat you buy for rich people's dogs where even the dogs would be like, "Nah. I'll stick with my balls." Tyler thinks the pickles could go on top of some kind of chowder, but CJ steamrolls him into making a strange pork burger. His reasoning is that Tom would want them shown simply, and to prove this, he does an impression of Tom saying that. That is not how logic works, CJ. You can't just do an impression of somebody to prove you know how they think. "Yeah, but it's Obama, and we can't serve him chowder, because he'll be like, 'Hello. Uh, I'm President Obama, and uh, I don't like chowder.'" Obama never said that, CJ. You just did an kind-of okay impression of him saying that.

Josie and Eliza use, I think, cardamom bitters to make a curried broth with manila clams and seared salmon. Josie allows Eliza to do very few things in the kitchen, but apparently should have let Eliza pick out the sand and rocks out of the soup, which the judges find. Lizzie and Danyele make a sloppy coconut curry chocolate mousse tart. The coconut-curry-chocolate artisan lady complains that there was other, non-coconut curry chocolate used, and I'm like, relax. You're on TV. You're getting paid. Let them use some other ingredients. CJ and Tyler serve their odd-ass pork burger with spicy dill pickles on crumpets. The crumpets look sloppy. Tom takes issue with how boring the burger is; apparently CJ's impression did not alter reality. Maybe Eliza has a dreamcatcher he can borrow or something? Tom and Padma tell everybody there are no winners this week, only losers. A whole team will go home at elimination. Everybody looks like they got the crapped kicked out of them. Sheldon offers everybody some candied salmon, jk barf. 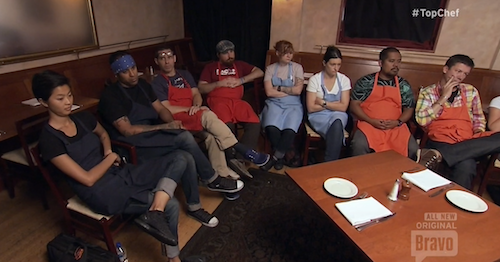 On the bottom are Stefan & Brooke, Josh & John, and CJ & Tyler. There is lots of zooming in on them. Josh mentions that he and Stefan get along because he too is arrogant and likable, which actually means he's just arrogant and that thinking he's likable is one of the many things he's arrogant about. Padma specifies that their food was simply the most disappointing, but it was all disappointing. Hugh Acheson steps up and gets all Center Square on everybody. He's full of Southern zingers! He says Stefan's cabbage was like eating somebody's grandmother, and when CJ asks what they thought of the terrible dessert by Lizzie and Danyele, as it was an abomination, Hugh says, "Uh oh, because your burger was even worse." Haha. "Uh oh!" Uh oh, indeed, Hugh. CJ and Tyler are going home. CJ is crushed to go out this early. He gives lots of weird reasons for how he's a much more confident chef now, and how his career is truly starting. Tyler seems kind of fine to be eliminated. He says, "Take the L out of lover cuz it's over." What a Dauber. "My main goal was to be myself and remain sober." I am glad he stayed true to those goals but also those are a silly goals for a cooking show. Was cooking well or winning money for your family a goal? "I just want to be myself and remember to floss and not go to bed full. That's why I am leaving my family for 13 weeks." 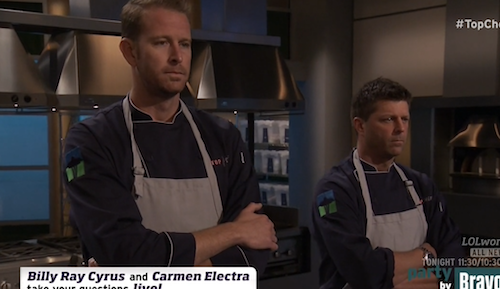