Share All sharing options for: Recap: Restaurant at Meadowood's 12 Days of Christmas

One of the lucky few who gets to attend all twelve of this year's Twelve Days of Christmas dinners at the Michelin three-starred Restaurant at Meadowood, Bonjwing Lee, a photographer, blogger, and regular guest writer for Eater, offers his post-game analysis, complete with photos. (Also see his halftime report from last week.)

Over the past two and a half weeks, thousands of plates, dozens of wines, twelve chefs, and hundreds of guests have passed through the kitchen at the Restaurant at Meadowood. Every day (minus Sundays and Mondays, when the restaurant is closed) offered a different scene, a different menu, a different vintner, a different guest list, and a different playlist. And I have been one of the fortunate few who has seen it all.

This past Saturday night marked the end of the fifth annual Twelve Days of Christmas that chef Christopher Kostow has hosted at Meadowood Napa Valley. Casting a wide net, this year, Kostow brought together a diverse group of chefs from all different backgrounds and places. Some were longtime friends, like Nick Anderer of Maialino, with whom Kostow studied in Rome during college, before either became a cook. Others, like David Toutain, the French chef who was named the Revelación del Año at this year's Gastronomika Conference in San Sebastian, were relatively new voices to the culinary world with which Kostow hoped to generate a dialogue about cooking. 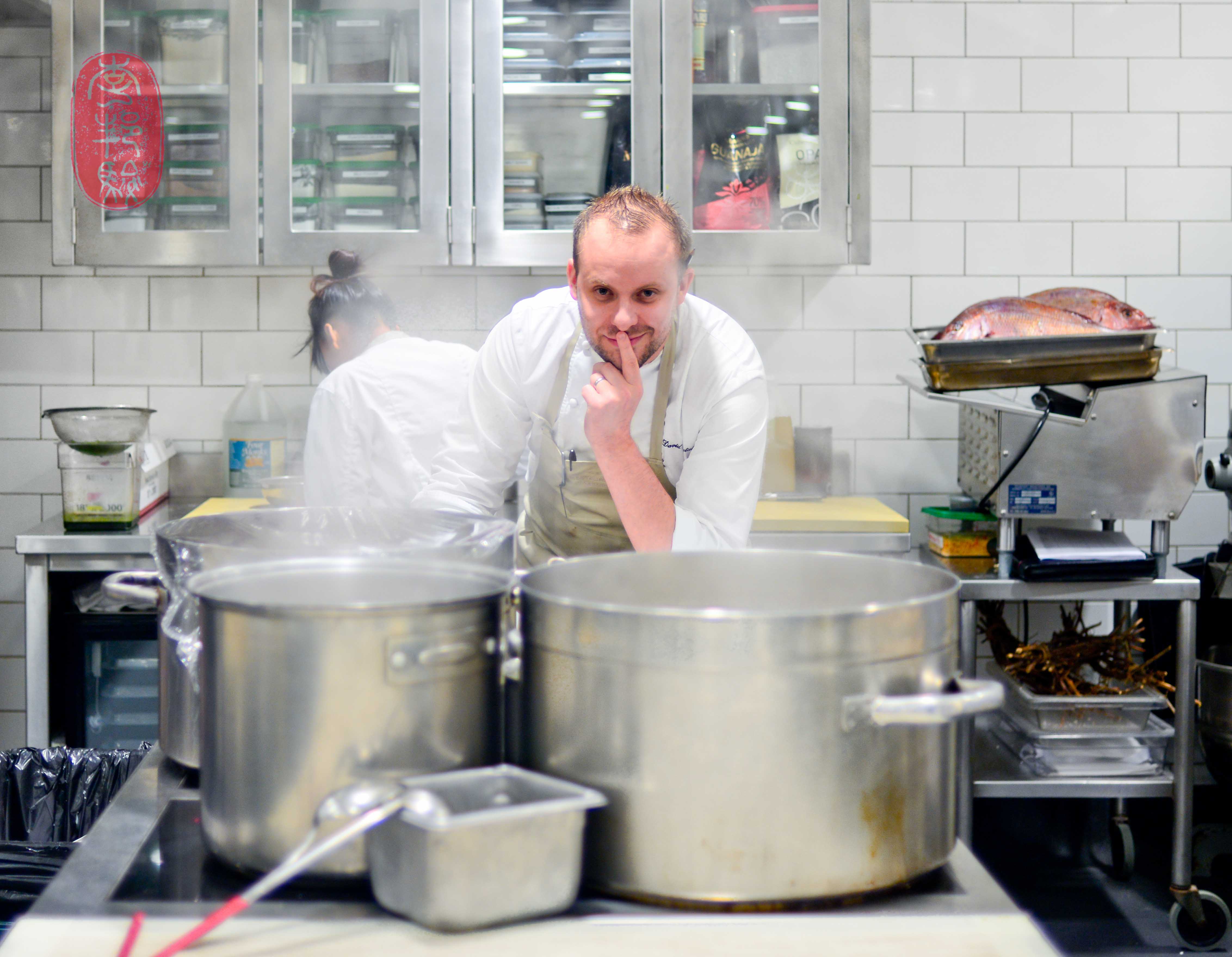 There was very little downtime during The Twelve Days of Christmas, and I was up and down with Kostow and his team for the entire stretch. The cooks were in the kitchen by nine o'clock in the morning, reviewing their prep lists and getting a head start on the day's work (and, often times, prepping ahead for dinners to come). After the line-up with the guest chef(s) at ten-thirty, both the guest chef and Kostow would run through their dishes for the night and the kitchen crew would begin preparing for dinner.

The front of the house staff would usually arrive around two o'clock in the afternoon to prepare the restaurant for service.

By four o'clock, everyone in the kitchen would be finished with their prep, more or less. Together, they would sweep and wipe down the entire kitchen with soapy water — countertops, reach-ins, and floors. Only when the kitchen had been thoroughly cleaned would the staff — both front and back of the house — break for family meal. Over twelve days, I sampled everything from Thai chicken and rice (courtesy of James Syhabout of commis) to Peruvian roast chicken (a gift from Veronica Vallejo and her husband Chris Laramie of Brasa in Oakland who had been guests at one of the dinners). My favorite staff meal was the one cooked by chefs Josh Habiger and Erik Anderson of The Catbird Seat. They made hot chicken, a Nashville staple, and shrimp and grits.

At five o'clock, the front of the house would meet for line-up. The service staff would get a thorough run-down of the night's menu (both food and wine, noting any allergies on the guest list that night), the markings (silverware) for each course, and a short biography of the guest chef and vintner.

At six o'clock, guests started arriving in the kitchen for canapés and Champagne. They were seated by seven.

The dinners would usually end by ten o'clock, after which the cooks would clean their stations, and then meet briefly about the next day's menu. The front of the house often stayed a little later, serving guests until the last one left, so they could reset the tables, and waiting on a lingering few, who would stay for drinks in the restaurant's lounge. 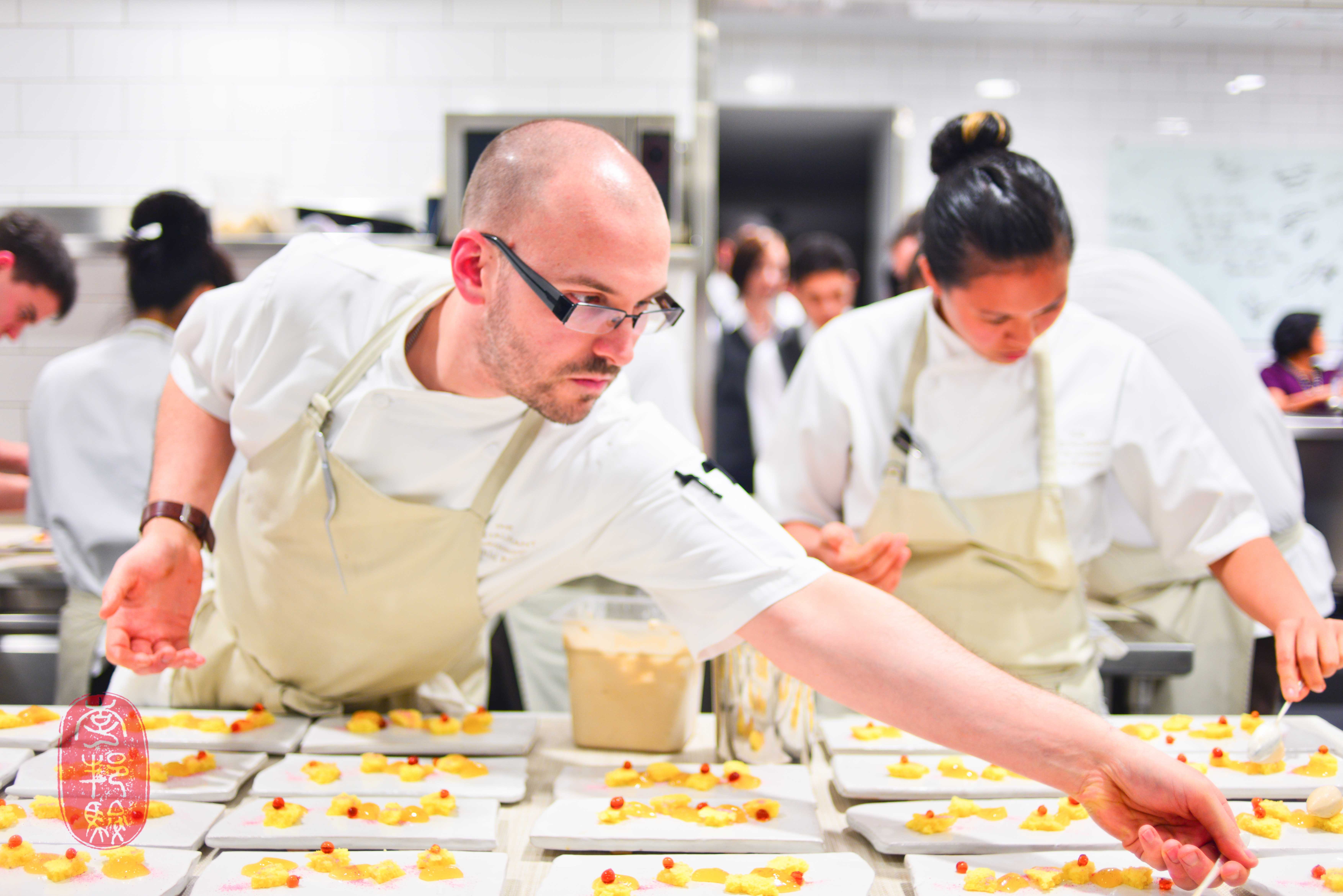 Few restaurants in American could pull off this kind of event with as much precision and style. Over the course of the twelve days, Kostow and his team (which includes Heidi Brown, the restaurant's culinary liaison, and Nathaniel Dorn, the restaurant's general manager) coordinated over a dozen chefs' itineraries and ingredient lists, made and thoroughly reviewed hundreds of reservations, prepared and cooked dozens of dishes and canapés, organized wines from numerous vintners, and catered to guests every night with a smile. They not only made it look effortless, they made it look like an immense pleasure.

The demands and stakes in a three Michelin-starred kitchen, like the one at the Restaurant at Meadowood, are high. But Kostow has assembled a talented and ambitious cast of individuals. Kim Floresca (the executive sous chef) and Daniel Ryan (pastry chef), for example, have worked in the kitchens of Mugaritz, per se, The French Laundry, alinea, TRU and el bulli, between the two of them (in fact, Floresca is on the cover of Lisa Abend's book about Ferran Adriá, The Sorcerer's Apprentices, and both Floresca and Ryan are pictured on page 226). Jeremy Rupp, the restaurant's expeditor, was formerly the expeditor at The French Laundry for many years. And Alexis Davis, the restaurant's head sommelier, came to Meadowood Napa Valley from the recently closed Cyrus.

Needless to say, there is a high level of professionalism among Kostow's staff. But, more impressive to me was that there was a high level of passion. Every member was self-motivated and highly disciplined, allowing Kostow the luxury of running his kitchen with a longer leash than I've seen elsewhere.

The pace in the kitchen was brisk, yet relaxed. There is always music, every day a different playlist. When I arrived at the kitchen around 9:30 in the morning on the last of the Twelve Days of Christmas, as I had every day of the dinner series, Kostow's iPhone, which was plugged into a speaker, was cycling through an upbeat mix of Michael and Janet Jackson, Prince, and Rick James. The day before, it had been country music, and the day before that, Christmas songs. 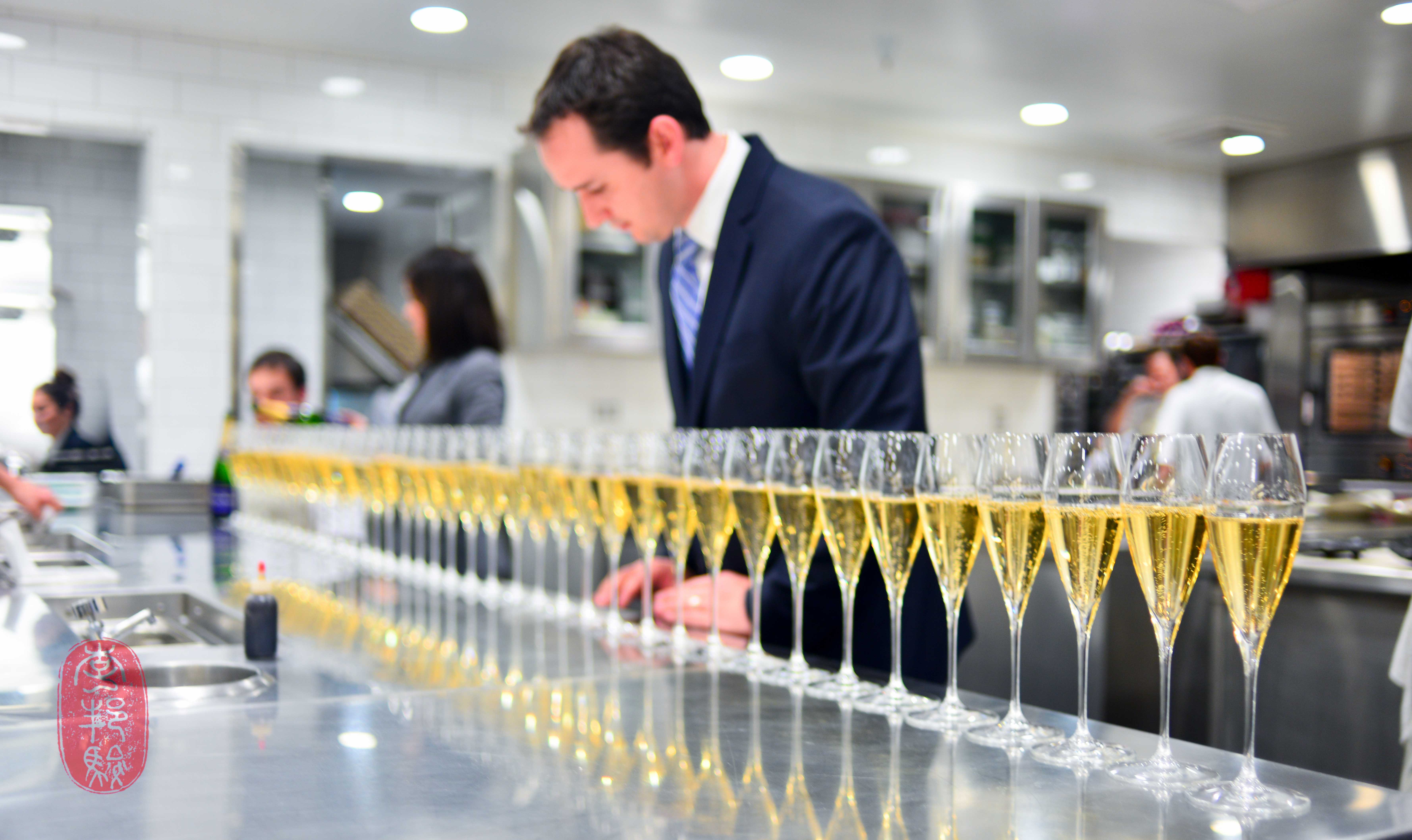 Nathaniel Dorn, and a row of Champagne [Photo: Bonjwing Lee]

The second half of the Twelve Days of Christmas brought some of the most-anticipated chefs of the dinner series to the Restaurant at Meadowood. David Toutain's, The Catbird Seat's chefs Josh Habiger and Erik Anderson's, and Christopher Kostow's dinners were all oversubscribed.

Regardless, every night was a spectacular celebration of the holiday spirit, full of generosity and enthusiasm. Every night, as he inspected the dishes during service, Kostow would remind his cooks not to skimp on the caviar or the truffles, or whatever luxury ingredient they were plating. "'Tis the season," he would shout, like a little kid. And they would respond in unison, "Oui, chef!"

The staff of the Restaurant at Meadowood. [Photo: Bonjwing Lee]

It's true, 'tis the season. And the Twelve Days of Christmas at The Restaurant at Meadowood captured its spirit wonderfully. It was collaborative, it was communal, it was charitable (20% of the proceeds went to Share Our Strength), and it was delicious. As far as culinary events go, this one was a great one. I hope Kostow hosts a sixth one next year.

For a full list of the guest chefs and guest vintners, visit the Restaurant at Meadowood's Twelve Days of Christmas website.

To read more about the first eleven dinners (on the twelfth night, hosting chef Christopher Kostow cooked), and see the photos that I've taken at each one, refer to the links below: