2012: The Year in Restaurant Industry Scandals

Share All sharing options for: 2012: The Year in Restaurant Industry Scandals

Everyone loves a scandal, and 2012's restaurant world had plenty of them. From employees behaving badly to CEO's behaving badly, all kinds of people got in all kinds of trouble (and Yelpers were outraged by all of it). Paula Deen was the big scandal of the year: the uproar over her diabetes diagnosis and subsequent pharma deal lasted for months. Chick-fil-A's president Dan Cathy started a media shitstorm when he claimed to be "guilty-as-charged" when asked about the company's anti-gay marriage stance. Iron Chef Cat Cora got a DUI, someone (Charlie Palmer) served Ottavia Bourdain a mediocre steak, an LA restaurateur broke an Eater editor's camera, and much, much more. Check out 2012's most scandalous scandals below. 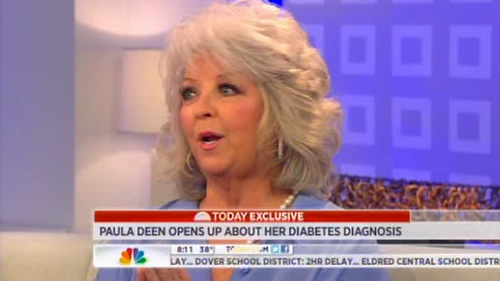 After years of slinging butter-laden Southern-influenced food on the Food Network, Paula Deen admitted to having Type 2 Diabetes, and (kind of) made an effort to lighten up her act. People weren't happy about the whole thing; Deen said she was "surprised by the depth of hate." 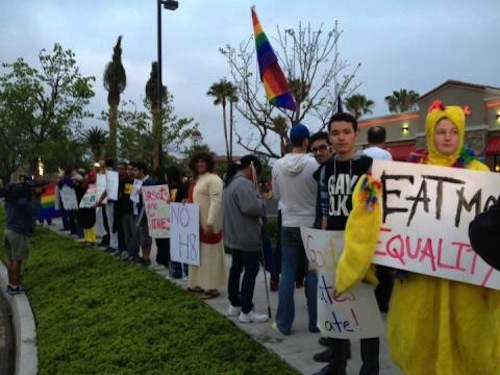 Chick-fil-A's Dan Cathy replied, "Well, guilty as charged," when asked if his company had an established position against marriage equality. People were and were not happy: Boston mayor Thomas Menino and San Francisco mayor Edwin Lee both tried to ban the chain, protests were organized both for and against Chick-fil-A, parody commercials were created, a guy lost his job after he ambushed a Chick-fil-A drivethru employee and put the video on YouTube, and, a year later, Cathy is still talking about biblical families in the press.

Iron Chef/Around the World in 80 Plates co-host/Miss USA judge Cat Cora was cited for a DUI in June after causing a minor accident. (No one was hurt, thankfully.) There was video from the scene (she calls the people filming her "two nerds") and audio of the 911 call (that claimed she was "yelling" and "driving insane").

After Anthony Bourdain's wife Ottavia mentioned "the worst steak [she'd] ever had in [her] life, an abomination" in an interview with Grub Street, the internet got to work trying to figure out who'd served it to her. AB got fed up with the whole thing and took it out on Vegas blogger John Curtas, calling him a "dipshit," "fuck-nuts," and "lazy" on Twitter. Turns out it was Charlie Palmer, who apologized after a number of other restaurants were falsely accused of serving the steak. 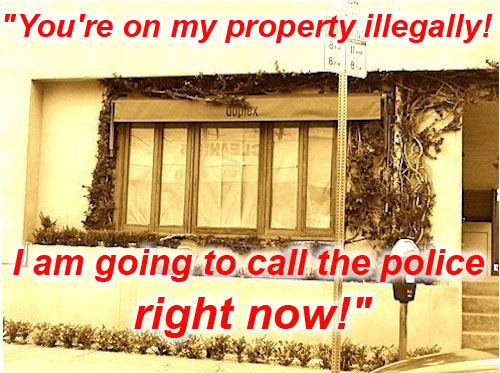 Eater LA's Daniela Galarza was getting a tour of forthcoming restaurant Duplex with its chef Ressul Rassallat when she was confronted by the enraged owner John Makhani. Makhani told Galarza, "You are not allowed in here, if you publish ANYTHING about ANYTHING I will sue you and sue your website. I swear to God." And then he broke her camera. 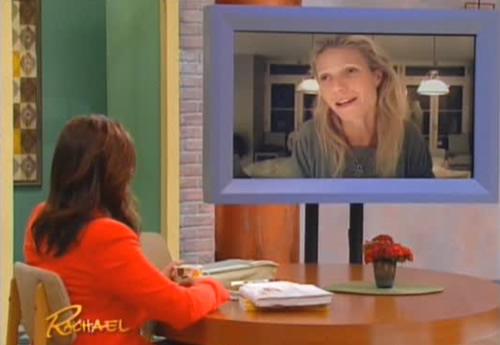 Julia Moskin wrote a piece for the New York Times called "I Was a Cookbook Ghostwriter," in which she claimed many celebrity chefs use ghostwriters to write their cookbooks. That part is true; the problem is, the authors of some of the books she cited claimed they didn't use ghostwriters. Rachael Ray was livid, Eater patron saint Gwyneth Paltrow got involved, the NYT public editor Arthur S. Brisbane called the piece "misleading," it was a whole mess. 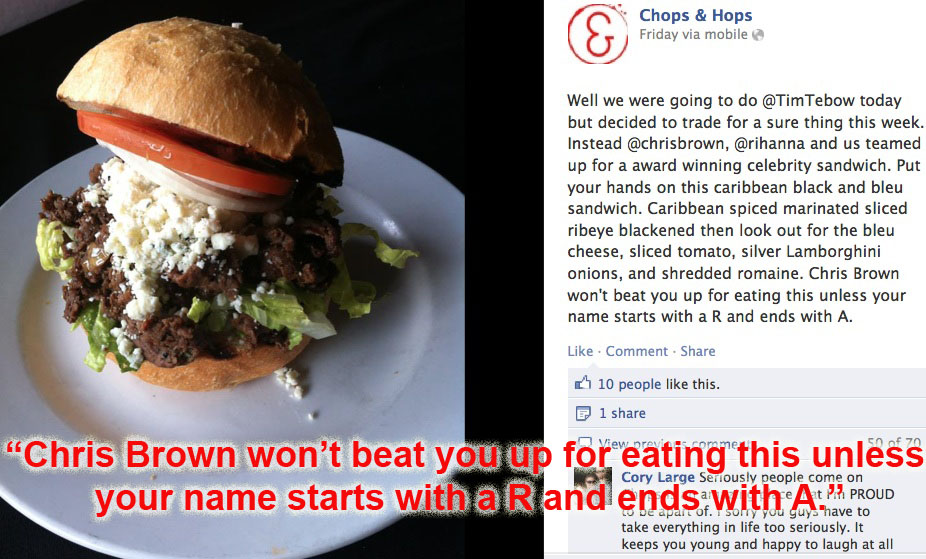 Georgia restaurant Chops & Hops ran a (fairly common) Black & Bleu Burger as their special back in March, but for some reason decided to dedicate the "celebrity sandwich" to Chris Brown and Rihanna. You know, because Brown was arrested for physically assaulting Rihanna the night before the 2009 Grammys. The restaurant has since apologized.

Yelpers Were Outraged by Everything 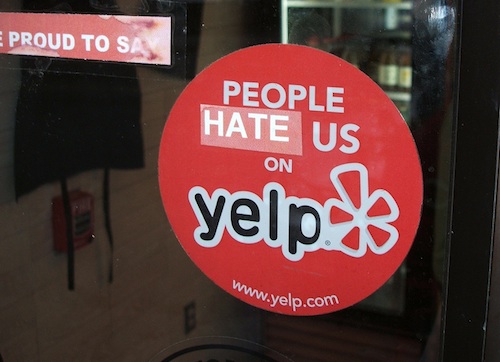 Yelp and its yelping Yelpers got upset about all kinds of scandals in 2012, including (but certainly not limited to) Ryan Gosling not going to his LA restaurant frequently enough for their liking, a San Francisco restaurant owner who blamed "demoralizing" Yelpers when his restaurant shuttered, businesses that buy fake reviews, a restaurant owner who got a hug from President Obama, Restaurant at Meadowood chef Christopher Kostow, Sacremento restaurants in general, crying kids, and who knows what else.

Ottawa restaurant owner Marisol Simoes was found guilty of libel and sentenced to 90 days in jail after she went on a two year revenge spree against a diner who write negative reviews of her restaurant online. Simoes sent an email to 75 coworkers of the author of the online review claiming the reviewer was looking for kinky sex, among other things. 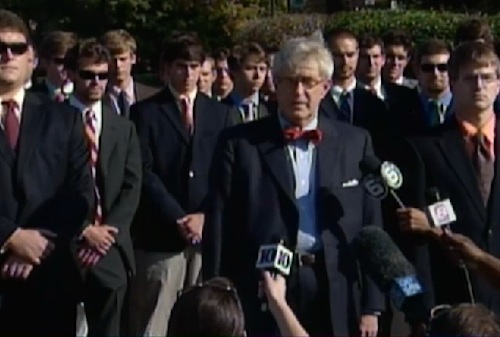 Butt chugging was already covered in Eater's Year in Irresponsible Drinking, but what's better than irresponsible alcohol enemas? How enraged the frat brothers involved were that anyone, anywhere might think that they had participated in such an activity. To clear up the matter, they ensured that everyone, everywhere would associate them with the words "butt chugging" forever by holding a press conference in which that term was repeated over and over again by an attorney in a bowtie.

Couple Refuses to Stop Having Sex on a Restaurant Patio

A Florida couple shocked their community and perhaps the world when they refused to quit having sex at the restaurant Paddy Murphy's. In front of kids. Even when a manager asked them to stop. The incident was a big enough deal that the manager's 911 call was released to local media. 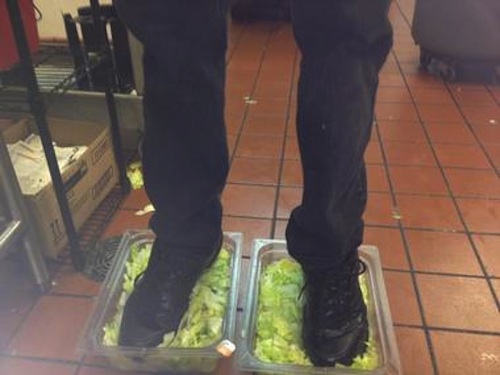 If there is one thing America's fast food employees learned from 2012, it is that posting photos online of yourself doing gross things at work is maybe not a good idea. First, a Taco Bell employee tweeted a photo of himself fake peeing on some nachos (it was Mountain Dew). He got suspended from work. Later in the year, a Burger King employee posted photos of himself standing in lettuce to anonymous internet playground 4chan, only to have the users there track him down. He was fired.