One of the lucky few who gets to attend all twelve of this year's Twelve Days of Christmas dinners at the Michelin three-starred Restaurant at Meadowood, Bonjwing Lee, a photographer, blogger, and regular guest writer for Eater, gives us a halftime report from St. Helena, California.

This event, known as the Twelve Days of Christmas, brings some of the world's most exciting chefs — names like Sean Brock, Enrique Olvera, Trey Foshee, Josiah Citrin, and Curtis Duffy have appeared on the roster in past years — and most-coveted wines (many, which are considered cult in status) to one restaurant in a three-week stretch leading up to Christmas. (Observing the restaurant's regular schedule, the dinner series pauses every Sunday and Monday.) And I am very fortunate to have been asked to be a part of it. Seven dinners have already taken place, and tonight, the eighth chef, James Syhabout of commis in Oakland, takes the stage, with wine pairings from Grace Family Vineyards. 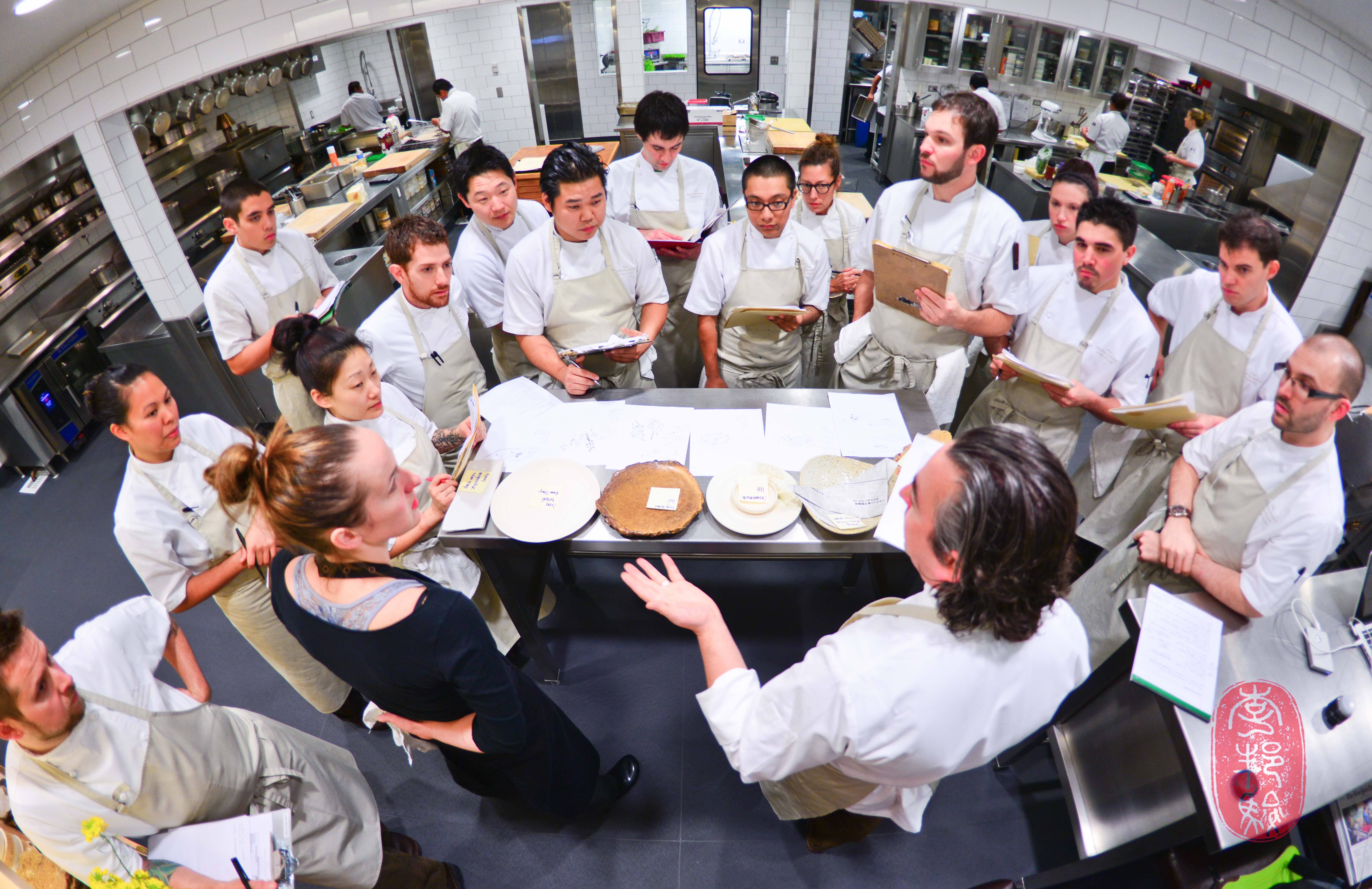 Matthias Merges at line-up with the staff at Restaurant at Meadowood [Photo: Bonjwing Lee]

A platform for collaboration.

This year, Kostow wanted to use this event as a platform for showcasing newer, and perhaps lesser-known names in the industry. He canvassed the world and assembled a diverse group from all over this country, and one from Paris, France.

More importantly, Kostow wanted to increase the collaborative dialogue among the chefs this year. In the past, invited chefs were given free reign over their respective dinners; Kostow and his team were merely the hands that helped assemble the plates. But this year, Kostow engaged each chef to learn about their individual philosophies and approaches to cooking so that he and his team could create and also present dishes that are tailored to each visiting chef's vision and voice. (For example, Kostow's team made yam-sesame mochi balls with curry spices as a canapé for Matthias Merges's dinner; Merges's cooking leans heavily on Japanese and Asian flavors.) 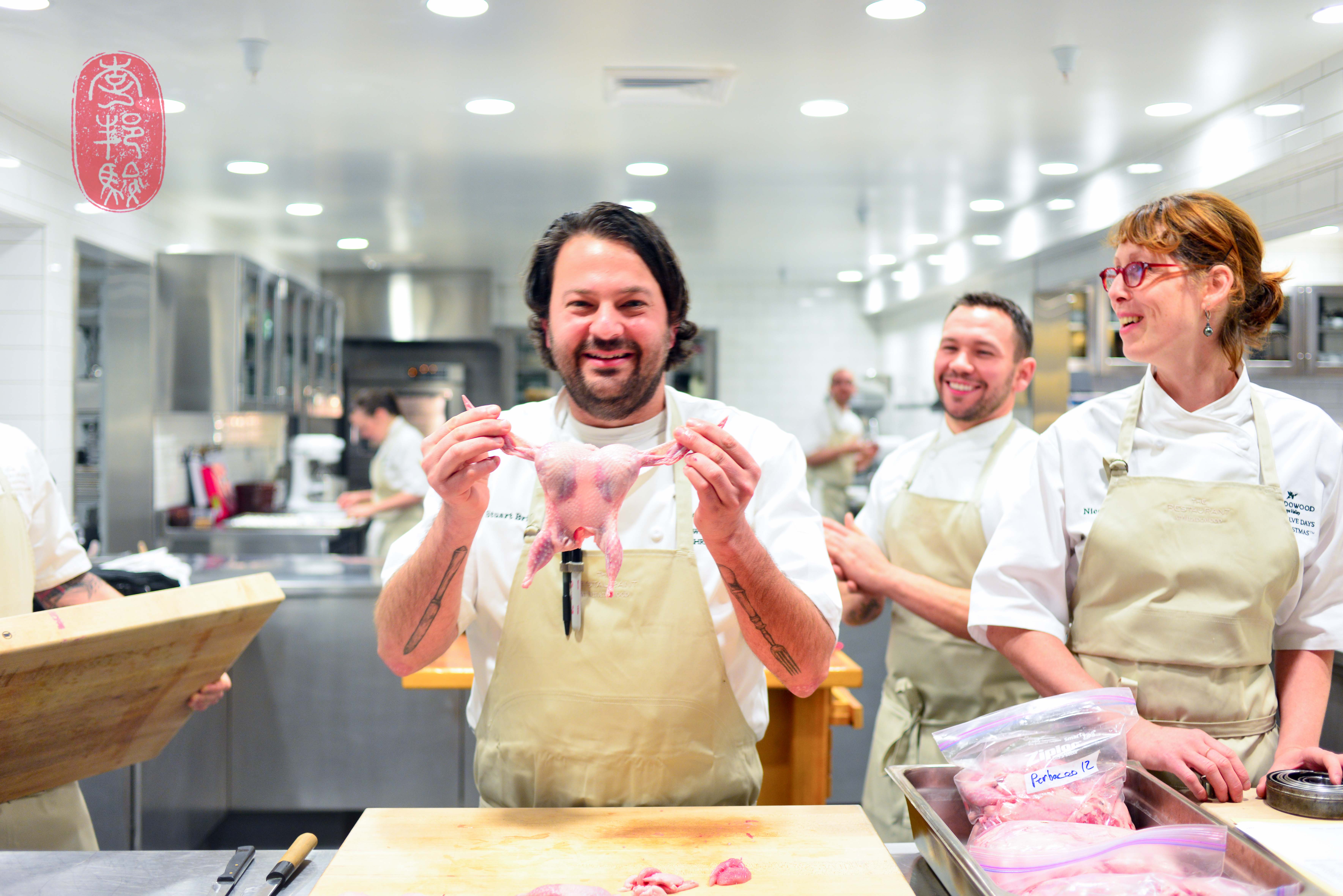 Also, chefs are invited for two nights each, which allows them to meet and work alongside other guest chefs. Overlapping in the kitchen, Scott Anderson (Elements; Day 1) and John and Karen Shields (husband and wife team formerly of Town House; Day 2) helped each other prep and tasted each other's food. Matthias Merges (Yusho; Day 6) and his chef de cuisine, Jennifer Petrusky, spent their nights off working the line to help Stuart Brioza and Nicole Krasinski (husband and wife team at State Bird Provisions; Day 4) and Jason Franey (Canlis; Day 5) get their dishes cooked and plated. And Josiah Citrin (Mélisse), a former guest chef at this event, donated his time, flying up from Los Angeles, to help his good friend Morihiro Onodera (formerly of Mori Sushi; Day 7) prepare and cook his dinner. It has been amazing for me to watch such a great concentration of talent and ideas gather in one kitchen in such a short period of time. And, to see them working in cooperation and collaboration has been a highlight. They are true professionals.

Kostow also reached out to the west coast branch of the Culinary Institute of American at Greystone to host a series of question-and-answer sessions featuring the guest chefs, so that culinary students in the area could join the dialogue (the last one will take place this afternoon with James Syhabout of commis and David Toutain, formerly of l'Agapé Substance). I have had the immense pleasure of moderating these sessions, which have brought together three or four chefs at at time to discuss inspiration, approaches to cooking, and advice for aspiring culinarians. Karen Shields urged students to "think outside the box," both in terms of cooking and location. Both Brioza and Phillip Foss (EL Ideas; Day 3) cited their travels and experiences in other industries as sources of motivation and inspiration. And Kostow emphasized the importance of cooking from the heart and trusting the internal compass. 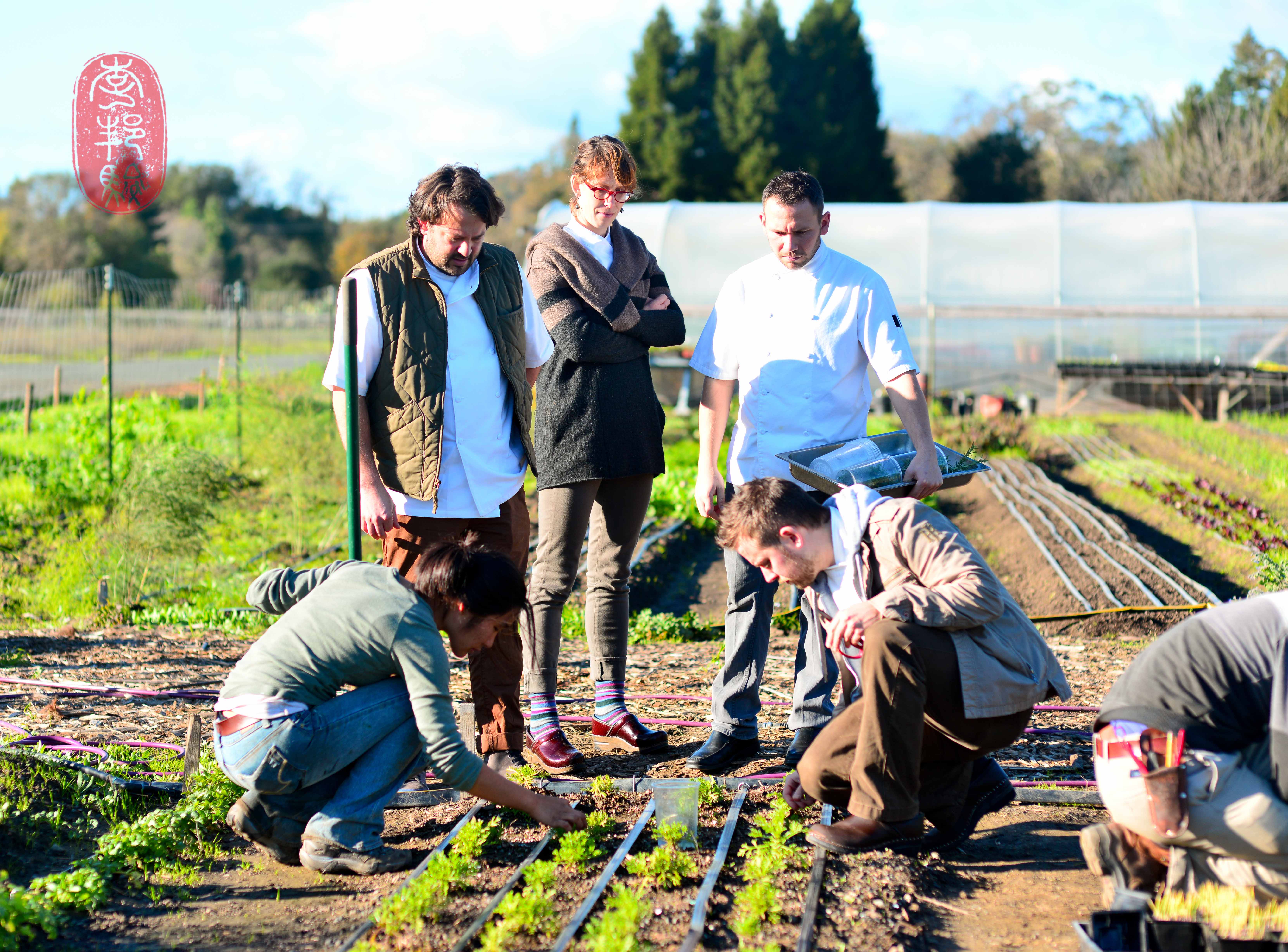 Chefs in the garden at the St. Helena Montessori [Photo: Bonjwing Lee]

The food has been very good. Some of it has been truly amazing, like Karen Shields's frosted geranium leaf with broken marshmallows, a dessert; Jason Franey's baked potato and leek pana cotta with oysters, caviar, and Champagne, a refreshing start; and Matthias Merges's "tasting of skins," a playful bowl of snack-chips, including puffy pork rinds and crunchy monkfish skin.

Most of the produce that has been used has been grown in one of the two Restaurant at Meadowood gardens — one at the Meadowood Napa Valley Reserve, the other at the St. Helena Montessori (another collaborative partnership that Kostow has initiated, in which he helps teach young students about sustainable agriculture). Onodera, for example, buried baby vegetables — carrots, radishes, and cucumbers — from the Montessori garden in a three year-old brown rice fermentation to pickle them.

Ingredients have also been diverse. Brioza introduced me to egg yolks that he preserved in salt and sugar, then crusted with cracked black pepper and air-dried. He shaved this over bay scallops and strips of tofu skin, adding a creaminess the dish. Merges used dehydrated bees in concert with a "honeycomb" dessert he served. He said he was inspired by a restaurant in Japan that only serves animals and insects that fly. And John Shields brought deer hearts, which he smoked, cured, and grated over aged venison carpaccio. 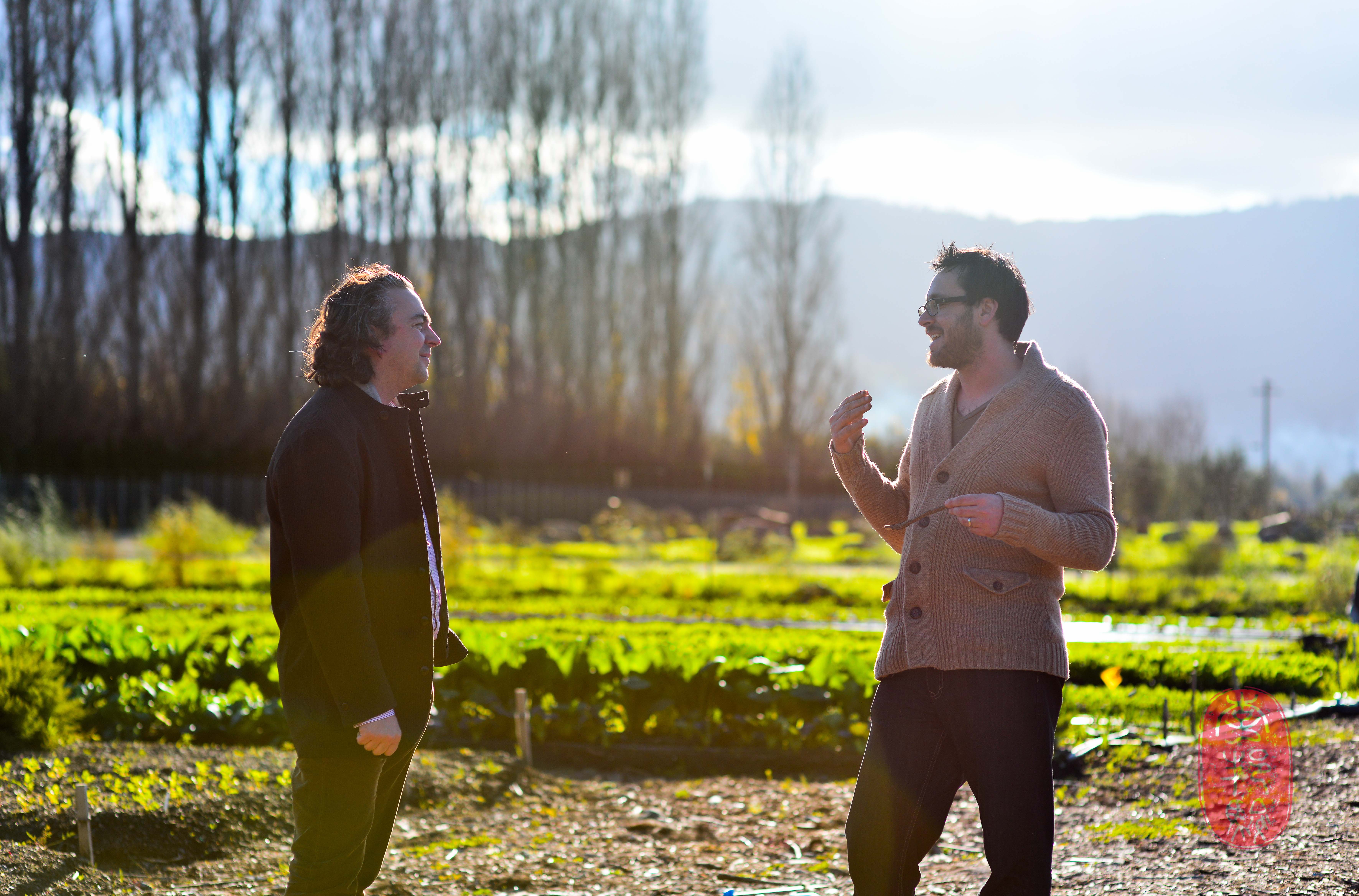 A little more than half over, the dinner series continues this week with the remaining five guest chefs: James Syhabout (Day 8; commis); Nick Anderer (Day 9; Maialino); David Toutain (Day 10; formerly of l'Agapé Substance); Josh Habiger and Erik Anderson (Day 11; The Catbird Seat); and Christopher Kostow (Day 12; Restaurant at Meadowood). For a full list of the guest chefs and guest vintners, visit the Restaurant at Meadowood's Twelve Days of Christmas website.

I will return to give a final, post-game analysis at the end.

To read more about the first six dinners, and see the photos that I've taken at each one, refer to the links below: