Welcome to Hangover Power Hour. From 3PM to 4PM EST, every site in the Eater universe will be focusing obsessively on that beast of all beasts, the hangover.

First up: Eater Minneapolis brings you "Five Hangover Cures from Your Favorite Bartenders."

From Eater Maine: Hangover 101 From A Master: Joe Ricchio. He suggests water, a hot and cold shower, kobucha, soup, a nap, sweet coffee, dumplings, more soup, and "Remember to take breaths in and out at a count of five when you can, because oxygen is your friend."

From Eater NY, a critical cat:

What causes a hangover? Probably drinking too much, but here's a video that explains it. Science:

A great hangover suggestion from Chef David Anthony Temple in Dallas: " "Sex and mimosas seems to do the trick and then breakfast at Smoke. 70 percent of the time, it works every time."

What do Charleston bartenders recommend for a hangover? Bloody Marys, shots of Jameson, coffee, and a Ramos gin fizz.

Ever have a hangover in Portland? You need to check out this pod tour, including the famous Nong's chicken and rice, Korean burritos, and sticky rice.

How about a map of Portland, Maine's best breakfast sandwiches? 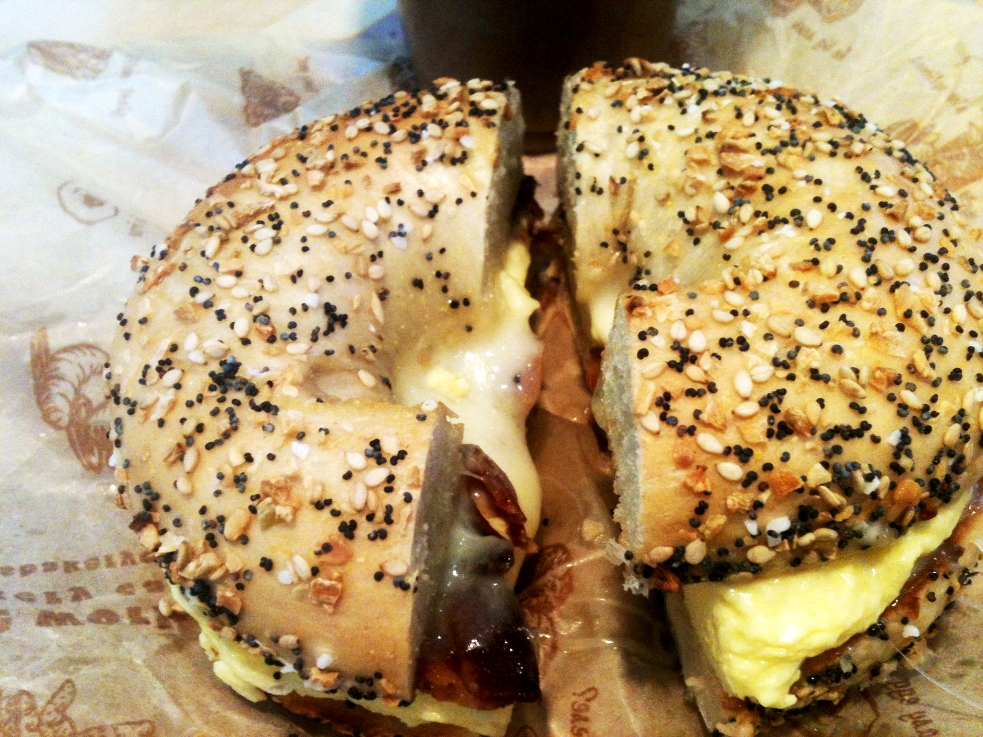 [Bacon, egg and cheese on an everything bagel from The Works Bakery Cafe. [Photo: Betsy's Blogel blog]

Do you care about menudo in Austin? Weigh in on their open thread. Those in SF can see a menudo map here.

Head to Eater Miami to watch a video of Kim Kardashian with her head in the toilet...about six hours before she gets her hangover.

You want to know what else helps a hangover? Poutine. Here Eater Boston has a list of all the best places to find it.

Here, via Eater Miami, is cocktail wizard Alex Ott making a drink that he claims is "hangover proof":

And one more fact blast to wrap things up: The longest hangover in history happened back in 2007, when a 37-year-old Scottish dude drank himself into six month hangover. A month after going on a bender in which he had around 60 pints in four days, he was still complaining of a headache and blurred vision. The severe dehydration apparently caused a rare blood disorder, and it took six months of blood thinning treatments for his headache to go away. [AFP]